University School of Milwaukee is firing back after being hit with a lawsuit from Craig Robinson, the brother of Michelle Obama, and his wife.

The city of Milwaukee’s Fourth of July festivities are back and scheduled for Monday, July 4 after two years of pandemic-related cancelations.

Racine police said Thursday, May 19 that a suspect has been arrested after pushing a pregnant woman to the ground in April.

Car thieves are targeting certain types of cars in downtown Milwaukee and doing it in broad daylight.

Milwaukee police are asking for the public's help to identify and locate a suspect wanted in connection to an armed robbery that happened near 9th and Burleigh.

An elementary school less than a quarter of a mile from the Summerset Marine explosion Thursday, May 19 had to be evacuated.

The season is over, but the lawsuit goes on. A fight that started on a basketball court is back in a court of law.

Three men charged in connection to a shooting near Water and Highland that injured 17 people made their initial court appearance Thursday.

What should you expect from your government's public meetings?

Contact 6 shares some of the big consumer issues causing problems for FOX6 viewers.

The new path to protecting the public from drug-addicted nurses.

There's a new tool for police many are hoping puts the brakes on reckless driving. 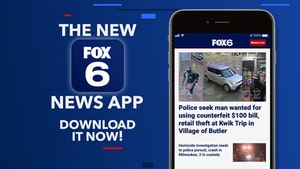