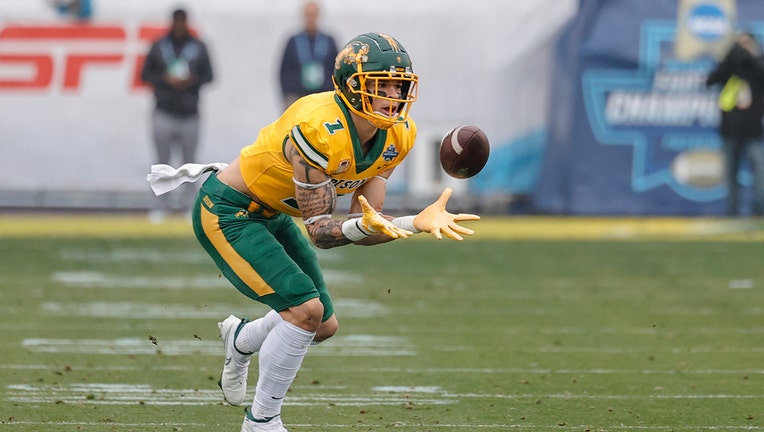 MILWAUKEE - The Green Bay Packers drafted Christian Watson, a wide receiver from North Dakota State, with the No. 34 overall pick in the second round of the NFL draft Friday, April 29.

In the third round, with the No. 92 overall pick, the Packers selected UCLA offensive lineman Sean Rhyan.

Originally slated with two picks later in the round, the Packers traded up 19 spots to snag Watson – sending those two picks to the Minnesota Vikings via trade.

"Obviously being able to catch passes from one of the best to ever do it is something I’m definitely excited about," Watson said. "I feel like I’m going to be able to learn and grow a lot through not just him but all the other receivers and everyone else in the organization as well. I definitely couldn’t be more excited to go at it with Aaron Rodgers."

The 6-foot-4 receiver was "one of the most explosive receivers at the FCS level," according to NFL.com. North Dakota State won Football Championship Subdivision titles in four of his five seasons at the school, including one redshirt year.

Watson has family ties to the Packers organization. The Packers drafted his father, former Howard defensive back Tim Watson, in the sixth round in 1993.

The Packers added depth to the offensive line with the selection of Rhyan, listed at 6 foot-5 and 321 pounds. According to Packers.com, he started 31 games over the past three seasons for the Bruins. He became a starter as a freshman.

The selection of two offensive players was a contrast to the draft's opening round, which saw the Packers select Georgia teammates Quay Walker and Devonte Wyatt in the first round – both were fixture's of the Bulldogs' national championship-winning defense.

The Packers entered the 2022 NFL draft with 11 total picks. That included three picks in the second and third rounds; picks No. 59 and No. 92 overall were their own, and pick No. 53 was acquired from the Las Vegas Raiders in a trade for wide receiver Davante Adams. It is the fourth consecutive year that the team will have at least 10 picks.

In recent history, the Packers have been busy in the second round – making 22 picks compared to 17 in the first and 16 in the third since 2005. In that span, 13 picks have been spent on offensive players. Position-wise, wide receiver and cornerback have been selected the most often.

With Brian Gutekunst at the helm as general manager, the Packers have made the following second-round picks:

And the following have been drafted in the third round: