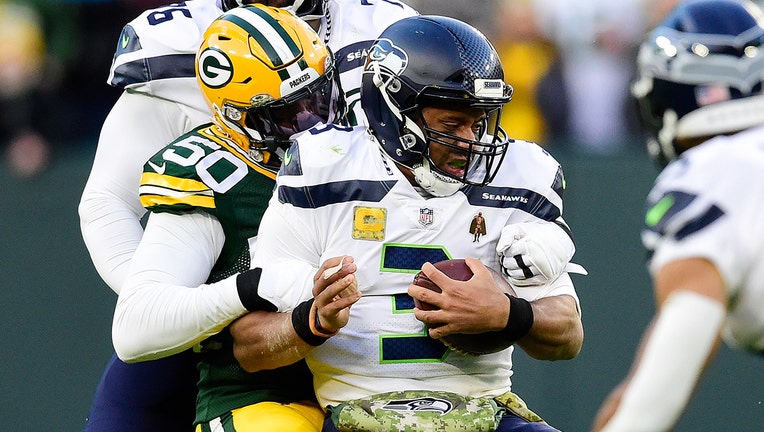 GREEN BAY, WISCONSIN - NOVEMBER 14: Russell Wilson #3 of the Seattle Seahawks is sacked by Whitney Mercilus #50 of the Green Bay Packers during the first quarter at Lambeau Field on November 14, 2021 in Green Bay, Wisconsin. (Photo by Patrick McDermo

GREEN BAY, Wis. - Outside linebacker Whitney Mercilus says he’s retiring, ending a 10-year career in which he made 58 sacks.

Mercilus, 31, announced his decision Wednesday via Instagram. The 2012 first-round draft pick from Illinois spent nearly his entire career with the Houston Texans before playing four regular-season games and one playoff contest with the Green Bay Packers last season.

"This decision was not an easy one, but I am excited and ready to walk into this new season of life," Mercilus said in his Instagram post. "God has given me the opportunity to play this sport professionally for 10 years, and He has given me this path to continue to walk within His purposes. I am grateful that I can walk away from football with absolutely zero regrets, a boatload of memories, lessons, lifelong friends, and a heart filled with gratitude."

Mercilus had all but one of his 58 career sacks with the Texans. He had a career-high 12 sacks in 2015. He had 7 ½ sacks in 2016 and earned second-team honors in the All-Pro balloting that season.

He played six games with the Texans last season before they released him. Mercilus signed with the Packers shortly afterward and played four games before going on injured reserve with a biceps injury.

Mercilus missed the rest of the regular season but returned to play in the Packers’ NFC divisional playoff loss to the San Francisco 49ers.

The Milwaukee Bucks announced on Wednesday, April 6 that the team has signed guard Luca Vildoza.