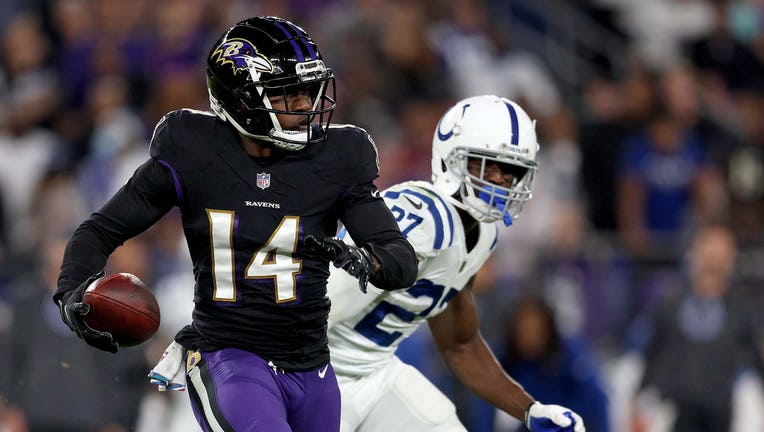 BALTIMORE, MARYLAND - OCTOBER 11: Sammy Watkins #14 of the Baltimore Ravens rushes after a catch during the second quarter in a game against the Indianapolis Colts at M&amp;T Bank Stadium on October 11, 2021 in Baltimore, Maryland. (Photo by Patr

GREEN BAY, Wis. - The Green Bay Packers have signed veteran wide receiver Sammy Watkins, the team announced Thursday, April 14. According to a report from ESPN's Adam Schefter, it is a one-year deal worth up to $4 million.

Watkins, 28, was a first round draft pick of the Buffalo Bills in 2014. He has since played for the Los Angeles Rams, Kansas City Chiefs and most recently one season with the Baltimore Ravens. He won a Super Bowl championship with the Chiefs.

In his eight NFL seasons, Watkins has amassed 348 receptions for 5,059 yards and 34 touchdowns. After a strong two seasons to start his career, Watkins' production tapered off, and he has not started more than nine games since 2019.

Last season with the Ravens, Watkins caught 27 passes for 394 yards and a touchdown. He started nine of the 13 games he played in.

Gilbert Gottfried died at the age of 67. FOX6's Gino Salomone happened to be one of the comedian's best friends.