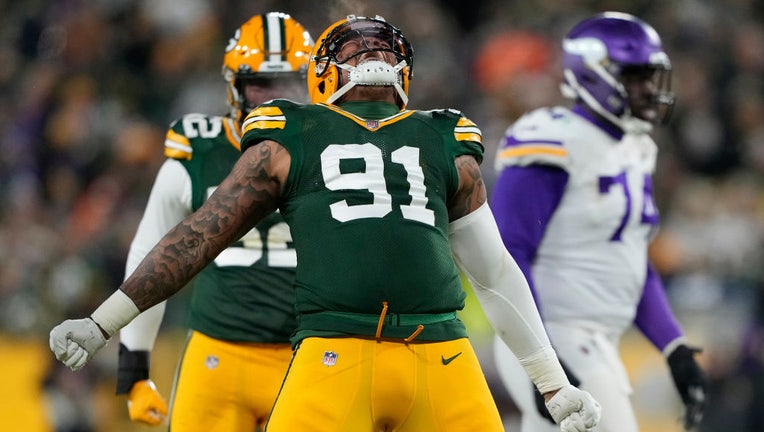 GREEN BAY, WISCONSIN - JANUARY 02: Outside linebacker Preston Smith #91 of the Green Bay Packers reacts after sacking quarterback Sean Mannion #14 of the Minnesota Vikings during the 2nd quarter of the game at Lambeau Field on January 02, 2022 in Gre

Releasing Za'Darius Smith and Turner creates about $19 million in cap savings for the Packers, who had entered the week about $46 million over the cap. But it leaves Green Bay without two veterans who played key roles in helping the Packers win three straight NFC North titles.

Za'Darius Smith, 29, had a combined 26 sacks for the Packers from 2019-20 before a back injury caused him to play just one regular-season game and one playoff game last year. Turner, 30, made a combined 43 regular-season starts and five playoff starts during his three-year Green Bay tenure.

After spending his first four NFL seasons with the Baltimore Ravens, Za'Darius Smith had 13 ½ sacks for the Packers in 2019. He had 12 ½ sacks in 2020 and earned second-team honors in the All-Pro balloting.

He dealt with back trouble last season. After playing in a season-opening loss to New Orleans, Smith didn’t get back on the field until the playoffs. Smith had a sack in the Packers’ divisional playoff loss to the San Francisco 49ers.

"We want to thank Za’Darius for his contributions to the Packers over the past three seasons," general manager Brian Gutekunst said Monday in a statement. "He came in and made an immediate impact on this football team, helping the team win three straight division titles. We want to wish Za’Darius and his family all the best moving forward."

Preston Smith and Za'Darius Smith aren't related, but they both arrived at Green Bay before the 2019 season to upgrade the Packers' pass rush.

The Packers didn't announce terms of Preston Smith's contract extension. NFL Network first reported the deal and said Smith was getting a four-year extension with $52.5 million in new money.

Preston Smith, 29, has delivered 25 sacks during his three seasons at Green Bay; he had nine sacks last season. He has missed only one game in his seven-year career, which includes four seasons in Washington.

The performance of Preston Smith and Rashan Gary, who had 9 1/2 sacks last season, helped the Packers withstand the absence of Za'Darius Smith.

"We are excited to have Preston continue his career with the Packers," Gutekunst said. "Since coming to Green Bay, he has not only contributed with production on the field but has been a great presence in the locker room and a leader for this team."

Turner’s versatility made him a valuable contributor on Green Bay’s offensive line.

"He is a true professional whose work ethic and leadership were big factors in the team’s success over the last few years," Gutekunst said.

The NCAA Tournament is coming to Milwaukee – and excitement is building.

One Lake Mills senior is taking a hobby and turning it into a college scholarship. That's what makes Hannah Alexander this week's FOX6 High School Hot Shot.