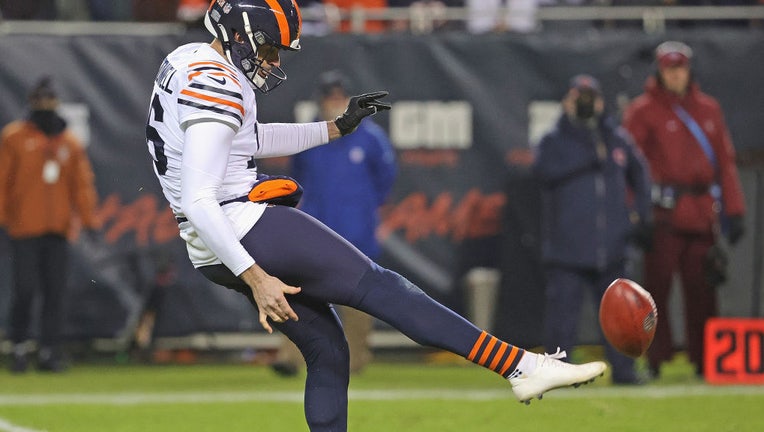 CHICAGO, ILLINOIS - DECEMBER 20: Pat O'Donnell #16 of the Chicago Bears punts against the Minnesota Vikings at Soldier Field on December 20, 2021 in Chicago, Illinois. The Vikings defeated the Bears 17-9. (Photo by Jonathan Daniel/Getty Images)

O’Donnell, who has spent the past eight seasons with the Chicago Bears, is an apparent replacement for Corey Bojorquez who is an unrestricted free agent.

O’Donnell played all 17 games for the Bears last season and posted a gross average of 46.2 yards and a net average of 38.5. Nineteen of his 62 punts were downed inside the 20-yard line.

The Bears selected O’Donnell in the sixth round of the 2014 draft. He played for Cincinnati from 2009-12 before finishing his college career at Miami.

Bojorquez finished the 2021 season with a gross punting average of 46.5 yards, the highest single-season average in Packers history for anyone with at least 35 attempts. His net average was 40.0. He also was the holder for field-goal attempts.

The Packers sent a 2023 sixth-round pick to the Los Angeles Rams in a Sept. 4 trade that brought them Bojorquez and a 2023 seventh-round selection.

There are plenty of employment opportunities for the upcoming season at American Family Field. A range of positions are available in food service, parking operations and cleaning services.