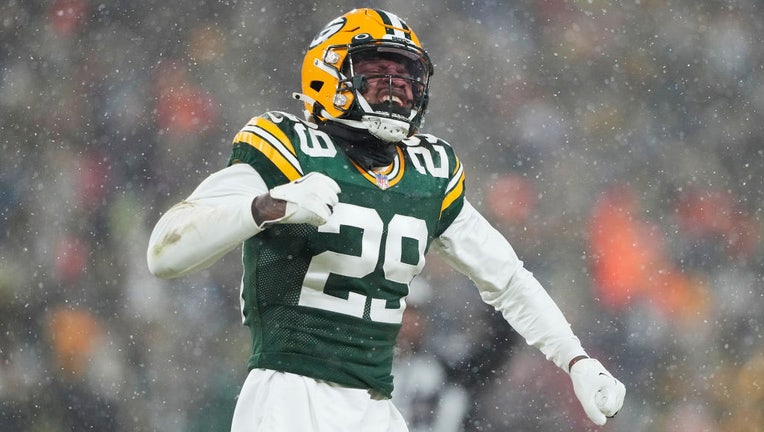 GREEN BAY, WISCONSIN - JANUARY 22: Cornerback Rasul Douglas #29 of the Green Bay Packers reacts after the Packers forced a turnover on downs during the 4th quarter of the NFC Divisional Playoff game against the San Francisco 49ers at Lambeau Field on

According to a Packers news release, Douglas, a 6-foot-2, 209-pound, sixth-year player out of West Virginia University, was originally selected by the Philadelphia Eagles in the third round (No. 99 overall) of the 2017 NFL Draft. He played three years for the Eagles (2017-19), one season for the Carolina Panthers (2020) and this past season for Green Bay after the Packers signed him off the Arizona Cardinals’ practice squad on October 6, 2021. Douglas played in 12 games with nine starts for the Packers, registering a career-best five interceptions, two of which he returned for TDs to tie for the fourth most in a single season in team history. The Pro Bowl alternate also registered 52 tackles (48 solo) and a career-best 13 passes defensed (No. 2 on the team). According to stathead.com, Douglas had the lowest passer rating allowed when targeted (44.5) in the NFL in 2021 among all defenders targeted over 45 times.

One Germantown junior took a hobby and turned it into his number one passion. That's what makes JV Myles this week's FOX6 High School Hot Shot.