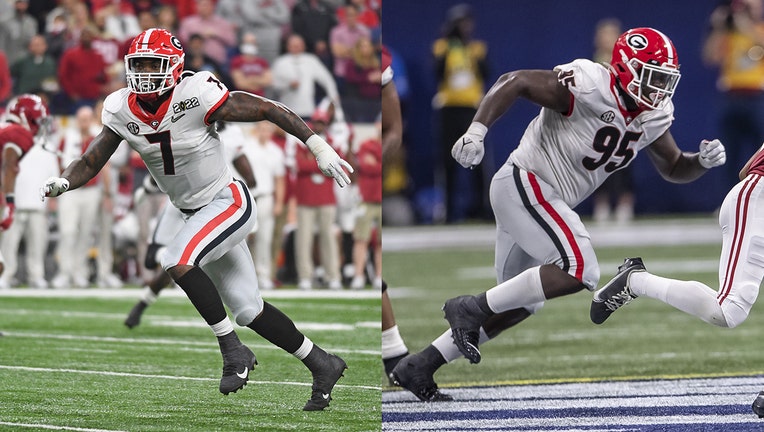 "It's a reunion," Walker said during his Zoom session after a reporter told him the Packers were taking Wyatt as well. "That's crazy."

Walker played four seasons at Georgia and was a key piece of the team's national championship-winning defense; he led the team with eight tackles in that game. In his college career, Walker had 137 tackles and five sacks.

The 21-year-old was a second-team All-SEC selection by the Associated Press. According to NFL.com, Walker is an "instinctive linebacker ready for the NFL game."

Wyatt also played four seasons at Georgia and was a fixture of the championship defense. With the Bulldogs, he had 113 tackles and five sacks. According to NFL.com, Walker is a "highly-active defensive tackle" who is "made for movement and disruptions."

"It’s a blessing," Wyatt said. "Getting drafted with a teammate and already having teammate that’s already down there, so I’m very happy, I’m very confident. I’m ready to go ball."

"Obviously they were two of many on that defense," Brian Gutekunst, Packers general manager, said. "The two things with these two particular players, and obviously they’re different, but their speed and explosiveness is off the charts. And I think their ability to create havoc in the run game and in the passing game I think, just the all-around nature of those players was something that really drew us to them."

Wyatt was arrested in 2020 on a misdemeanor charge of family violence criminal trespass, though the case was later dismissed.

"We brought him in and spent a lot of time with him not only when we brought him in here to Green Bay, but really did kind of a deep dive in the human being and making sure that he could fit in our culture here," Gutekunst said.

Gutekunst said the Packers "walked away feeling really good about who he was and how he would be here for the Green Bay Packers."

That set in motion the Georgia reunion at Green Bay.

The Packers entered the 2022 NFL draft with 11 total picks. That includes four total picks in the first two rounds; picks No. 28 and No. 59 overall were their own, picks No. 22 and No. 53 overall were acquired from the Las Vegas Raiders in a trade for wide receiver Davante Adams. It is the fourth consecutive year that the team will have at least 10 picks.

Gutekunst is at the helm of his fifth draft as general manager. Historically, Gutekunst has been keen trading up and down in the draft's first round. The selection of Stokes last year was the first and only time Gutekunst stood pat with the team's original draft position and made no other first-round picks since becoming general manager.

In recent history, the Packers have favored the defensive side of the ball when drafting in the first round. Since 2005, 13 of 17 first-round picks have been used on defensive players. Of the other four, two have been spent on quarterbacks – Aaron Rodgers and Jordan Love.