Among likely voters, in his race for reelection, U.S. Sen. Johnson, a Republican, is supported by 49%, while his Democratic opponent, Lt. Gov. Mandela Barnes, is the choice of 48%. In August, immediately after the primary election, Johnson trailed Barnes by 7 percentage points, 52% to 45%, among likely voters.

Why the change in Johnson's favor? Among independent voters, 55% backed Barnes in August compared to 40% for Johnson. Marquette pollster Charles Franklin said there was a bump after Barnes won the August primary, but independents now back Johnson – 48% for the Republican compared to 46% for Barnes. In the August poll, 41% of Wisconsin voters said they did not know enough to give an opinion of Barnes. 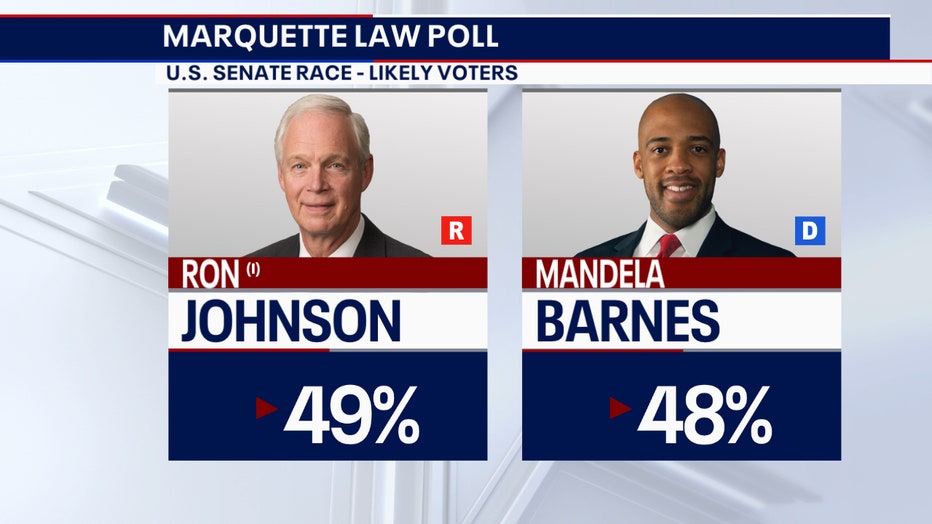 In the governor’s race, 47% of likely voters support Democratic Gov. Evers, while 44% favor Republican Tim Michels. The independent candidate, Joan Beglinger, was chosen by 5%, with 3% who don’t know. Beglinger ended her campaign on Sept. 6 but will remain on the November ballot. In the school's August survey, Evers received 48%, Michels 44%, and Beglinger 4% among likely voters. 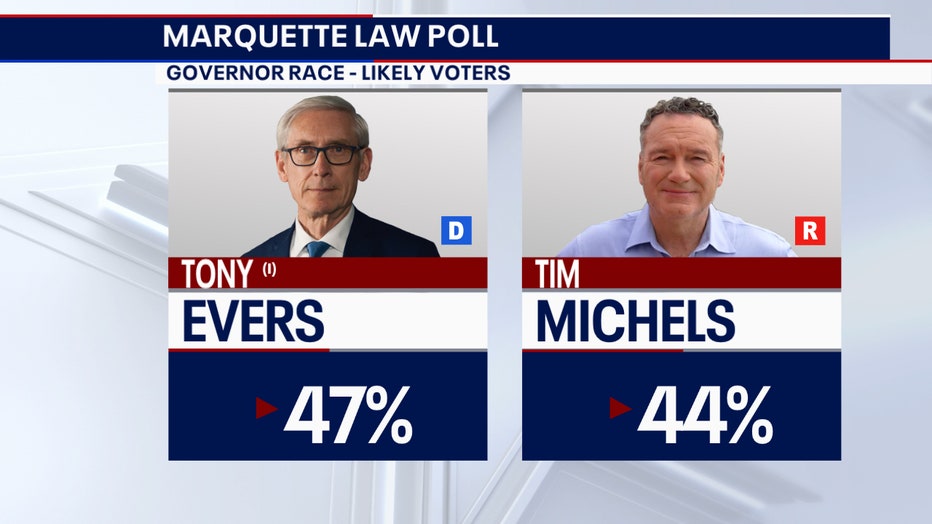 Voters on the issues

The survey asked respondents how they concerned are about the following issues.

Inflation ranked as the top issue of concern after it declined as a concern from June to August.

The U.S. Supreme Court decision earlier this year to overturn Roe v. Wade, the 1973 ruling which had meant that abortion was legal nationwide, is opposed by a majority of Wisconsin registered voters, including majorities of independents and Democrats. It is favored by a majority of Republicans in the state. The respondents overwhelmingly support allowing legal abortions in the case of rape or incest, with support of 70% or more in each partisan group.

Both Democratic and Republican voters are strongly unified behind their respective party’s candidates, with 95% of Democrats supporting Evers and 92% of Republicans supporting Michels. Forty-five percent of independents back Evers, while 39% prefer Michels. The independent candidate, Beglinger, receives 11% from independent voters, 2% from Republicans, and 2% from Democrats.

As in the governor’s race, partisans are well-aligned with their party’s candidates, with 96% of Democrats supporting Barnes and 97% of Republicans supporting Johnson. Forty-eight percent of independents back Johnson, while 46% prefer Barnes.

"It actually does take into late October for a lot of people to tune in and start paying attention," Franklin said. "When you judge by the partisans, look at our vote splits by party and it’s mid 90% of parties are going with their candidate. But the knowledge of the candidates among the indepdent voters is still much more limited and the challengers are less known than the incumbents."

Among those surveyed, 53% said Evers has been effective as governor.  Among those surveyed, 50% said Johnson has been effective as a senator. Overall, Evers' approval rate among registered voters was 44% – down three percentage points from the August poll and down six percentage points from Februrary. For the second time, more Wisconsin voters disapprove of Evers' job than approve, according to the poll.

A majority of respondents, 53%, think the state is off on the wrong track, while 40% say it is headed in the right direction.

In September, 40% approve of the way President Joe Biden is handling his job, while 55% disapprove, unchanged from August. Sen. Tammy Baldwin is seen favorably by 37% and unfavorably by 40%. The results show opinions of former President Donald Trump overall and by party identification. A substantial majority of Republicans hold a favorable view of Trump, while majorities of independents and Democrats have an unfavorable opinion of him.

The Marquette Law School Poll is the most extensive statewide polling project in Wisconsin history, the university said. This poll interviewed 801 registered Wisconsin voters by landline or cell phone, Sept. 6-11, 2022. The margin of error is +/-4.3 percentage points for the full sample. The margin of error for likely voters is +/-4.9 percentage points

Items asked of half-samples include on Form A the issues of public schools, inflation, abortion policy, taxes, gun violence, and crime. Form B items concern the coronavirus pandemic, illegal immigration, climate change, and ensuring an accurate vote count. Form B also included items on property taxes and school spending, and the closing of schools and businesses at the beginning of the coronavirus pandemic.

The entire questionnaire, methodology statement, full results, and breakdowns by demographic groups are available on the unversity's website.

"Our campaign has seen a meteoric rise in support in five months while Tony Evers has failed for years. Tim Michels appeals to a broad group of Wisconsinites from all walks of life, and our closing the gap reflects what we are seeing on the trail as we outwork the Evers campaign. As more people pay attention to the race and Tim continues to talk about the issues that matter most, they realize the tired, old failures of Tony Evers have Wisconsin on the wrong track."