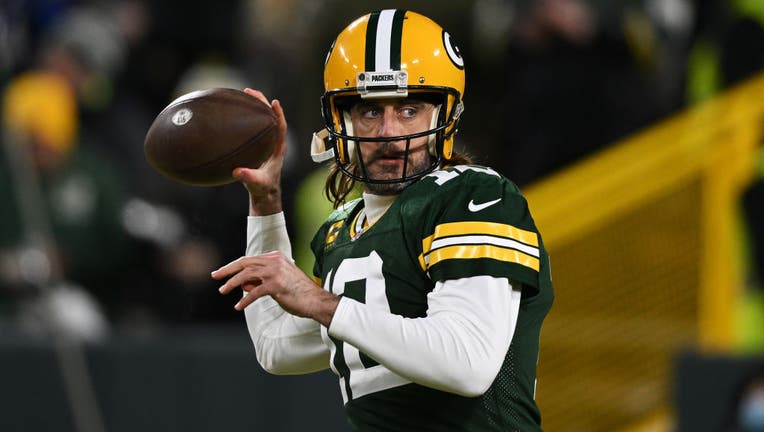 Aaron Rodgers warms up prior to the NFC Divisional Playoff game against the San Francisco 49ers at Lambeau Field on Jan. 22, 2022. (Photo by Quinn Harris/Getty Images)

Rodgers has now won the award in back-to-back seasons and four times overall – the second most by one player in NFL history behind only Peyton Manning, who has won the award five times.

In 2021, Rodgers started 16 of 17 possible games for the Packers as they finished with the NFL's top record and clinched the NFC's top playoff seed. In those 16 games, Rodgers threw for 4,115 yards and 37 touchdowns to just four interceptions.

In addition to being named the NFL's MVP, Rodgers was named first-team All-Pro for the fourth time in his career and made his 10th Pro Bowl – a record among Packers players.

The MVP caps a year dotted with public controversy and tumult for Rodgers.

On April 29, 2021 – the opening night of the 2021 NFL draft – ESPN's Adam Schefter reported that Rodgers had grown "disgruntled" with the Packers to the point that he would not return.

After much speculation of what would come next, Rodgers arrived in Green Bay for the start of training camp in July. The three-time MVP let it be known publicly that he wanted to have a voice in the decision-making process.

Rodgers became the center of a second media firestorm of the year when it became known that he had not received the COVID-19 vaccine, seeking alternative treatment options instead. His explanation for being "immunized," as he put it, instead of vaccinated against the coronavirus, drew flack. Though he defended his stance on not receiving the vaccine, he made comments that repeated debunked myths surrounding its use.

The Packers lost their lone playoff game to the San Francisco 49ers at Lambeau Field, ending the season and starting the clock on another uncertain offseason for Rodgers.