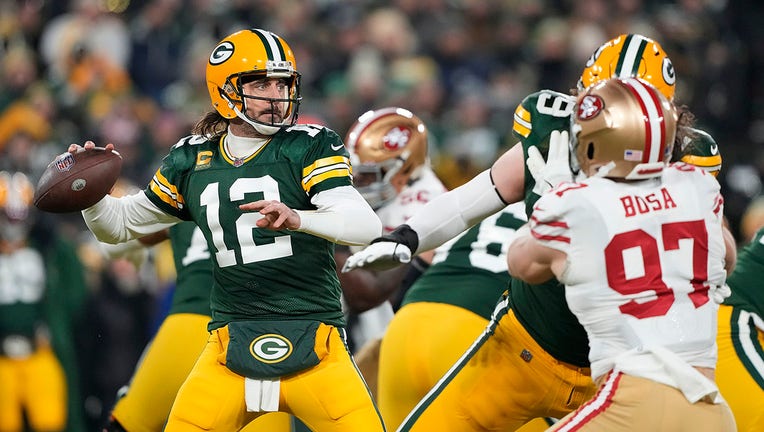 GREEN BAY, Wis. - Aaron Rodgers heads into another offseason of uncertainty after one more frustrating finish to a brilliant year.

Rodgers drove the Packers to a touchdown on the game’s opening possession, then couldn’t get them back in the end zone the rest of Saturday night. Their season ended with a stunning 13-10 NFC divisional playoff loss to the San Francisco 49ers.

Robbie Gould’s 45-yard field goal as time expired won the game for the 49ers, who scored 10 unanswered points in the final five minutes.

The shocking finish capped a turbulent year in which Rodgers skipped the Packers’ mandatory minicamp; missed a game due to a positive COVID-19 test after making misleading comments about his vaccination status; but still earned All-Pro honors and put himself in position for a possible fourth MVP award.

Rodgers entered Saturday having thrown 20 touchdown passes with no interceptions over his last seven regular-season games. But he once again wasn’t spectacular in the postseason. He went 19 of 25 for 221 yards with no touchdowns or interceptions. He was sacked five times while working behind an offensive line missing injured tackle David Bakhtiari.

When the Packers had the ball in a tie game in the closing minutes, they went three-and-out and punted, which eventually led to the 49ers’ winning field goal.

And it was only fitting the game came down to a kick because the Packers’ special teams breakdowns enabled San Francisco to pull off this comeback. Green Bay’s kick teams were its biggest weakness all year, and that was never more evident than Saturday night.

The 49ers tied the game with 4:41 left when Jordan Willis blocked Corey Bojorquez's punt and Talanoa Hufanga returned it 6 yards into the end zone.

There was an equally big special teams mistake on the final play of the first half.

After Rodgers threw a 75-yard pass to Aaron Jones – the longest completion of his playoff career – the Packers had the ball at the San Francisco 14 with a chance to build on their 7-0 lead. But after Nick Bosa sacked Rodgers and forced a fumble the Packers recovered, Jimmie Ward blocked Mason Crosby’s 39-yard field goal attempt.

Green Bay needed to capitalize on that long pass from Rodgers to Jones because the Packers didn’t create enough big plays. After A.J. Dillon scored from 6 yards to cap the game’s first possession, the Packers did relatively little with the ball.

The Packers have contended just about every season Rodgers has been healthy, yet haven’t reached a Super Bowl since their 2010 championship season. Now the question is whether Rodgers will continue chasing a second Super Bowl title in a Packers uniform.

Rodgers said last month he would try to make a decision on his future soon and was keeping all options open. All-Pro receiver Davante Adams also has an uncertain future as he enters free agency.

Rodgers and Adams put out Instagram posts in the offseason with references to Michael Jordan and Scottie Pippen of the Chicago Bulls during their 1997-98 title run that was chronicled in the ESPN documentary "Last Dance," a winking suggestion that this also might be their last year together in Green Bay.

The Green Bay Packers lost to the San Francisco 49ers in the NFC Divisional playoffs at Lambeau Field.

The Green Bay Packers divisional playoff game against the San Francisco 49ers united fans across the state – and even around the world.

FOX6 News spoke to fans leaving Lambeau Field after the Packers were eliminated from the NFL playoffs, their season ending in heartbreak.