Wisconsin Democrats rallied their base after the U.S. Supreme Court overturned Roe v. Wade the day before, removing federal protection for abortion.

In upcoming elections, Democrats say it is not just their names on the ballot this fall, but the issue of abortion, too. It was a rallying cry at the Wisconsin Democratic Convention, held Saturday in La Crosse.

As Democrats push back against the Supreme Court's ruling, Gov. Tony Evers brought up his seven granddaughters.

In addition to strong words, Evers vowed to do whatever he can to evade the state’s abortion ban that was passed in 1849 but hasn’t been in effect since the 1973 Roe v. Wade ruling. That includes supporting lawsuits to overturn it, not appointing district attorneys who would enforce it and offering clemency for doctors convicted under it. 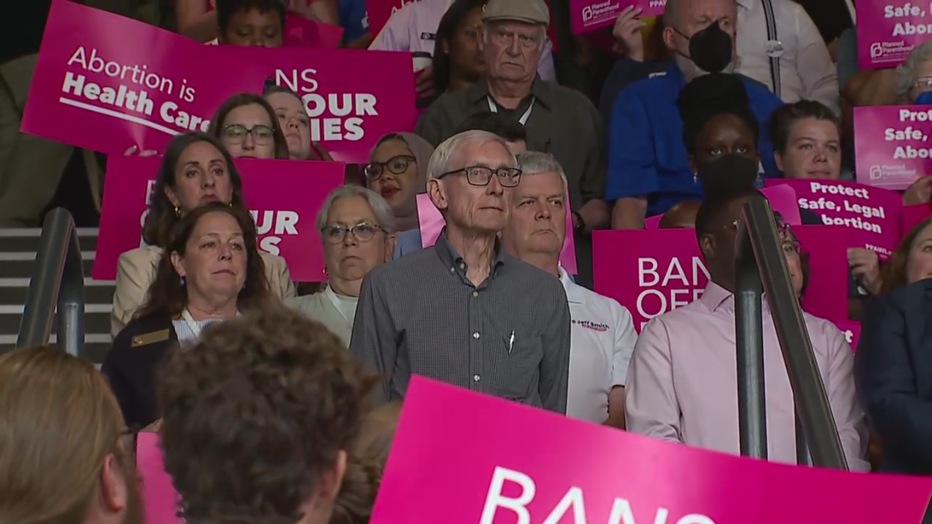 "Clemency will be offered to anyone charged and convicted," Evers said.

"Diverting those resources to investigating alleged violations of the 19th century abortion ban would be contrary to public safety," he said.

One Democratic Candidate for the U.S. Senate will take on Republican incumbent Ron Johnson in the November election. FOX6 Asked the four Democratic candidates polling above 1% in a recent Marquette University Law School poll what they would do in response to the court's decision:

U.S. Sen. Tammy Baldwin spoke about the ruling at Saturday's convention, but also said state lawmakers need to work for the best interest of the people.

Johnson made an appearance at a conservative summit in Milwaukee on Saturday. While, on Friday, the senator called the Supreme Court's decision on Roe v. Wade "a victory for life" – he remained tight-lipped on the battle over abortion rights Saturday. Instead, he focused on the election.

"There are many things that divide out politics, and I would argue certainly in the upcoming election, what's on the ballot is literally truth versus lies and distortion," he said.

"The vast majority of people know we stand for the sanctity of life from the beginning and will continue work on that," said Paul Farrow, chairman of the Republican Party of Wisconsin.

Farrow said Evers’ position on abortion was appealing only to "his activist base and going against the will of the people." He downplayed the significance of the court’s ruling on the election.

"All they really did yesterday was, 50 years ago an activist bench made a decision that wasn’t constitutional and put that into play, so they’re correcting that," Farrow said. "Is it causing any change to the political landscape?"

Republicans pointed to other issues they say will be on voters' minds.

"They’re going to be thinking about the skyrocketing costs, the violent crimes, the plummeting education standards we have in Wisconsin," Farrow said.

"This election is about three things Evers and (the) Biden administration is failing on: that’s gas, groceries and grandkids," Derrick Van Orden, a Republican candidate for Wisconsin's third congressional district, said.

Republicans did not endorse a candidate for governor at their state convention in May, but the winner of the August primary will face Evers in November.

No governor who was the same party as the sitting president has won election in Wisconsin since 1990. The Marquette University Law School poll this week showed Evers slightly ahead of his Republican challengers, while Johnson was about even with each Democrat running against him.

Evers said he feels confident abortion will be a winning issue for his party because polls have consistently shown about 60% of Wisconsin residents support it being legal in most or all cases.

The governor said his office is looking into an executive order concerning abortion rights, while Farrow said any change should come through the Legislature in 2023.