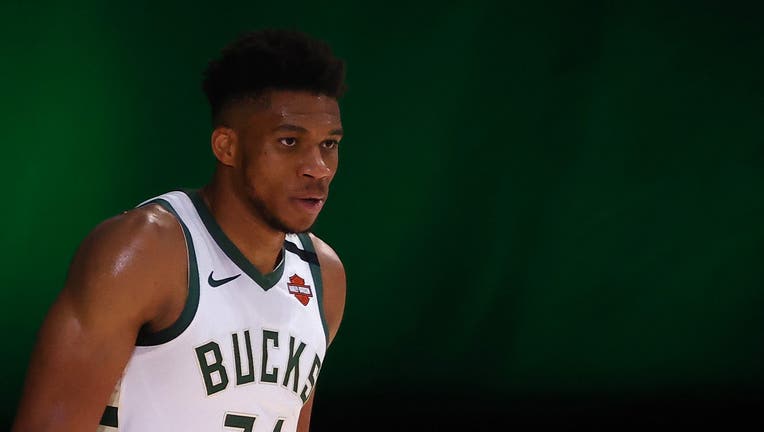 MILWAUKEE - Giannis Antetokounmpo, the Milwaukee Bucks star and back-to-back NBA most valuable player, has been named to TIME's "100 Most Influential People of 2020" list.

Antetokounmpo, 25, became just the third player in NBA history to be named MVP and defensive player of the year in the same season -- joining hall-of-fame players Michael Jordan and Hakeem Olajuwon.

The impact and influence of Antetokounmpo, though, reached beyond the court in 2020 -- becoming a central figure in team protests regarding racial injustice.

On June 7, with the NBA season on hold due to the COVID-19 pandemic, Antetokounmpo and several of his Bucks teammates joined a Milwaukee march -- protesting the officer-involved death of George Floyd in Minneapolis.

Floyd's death, along with the fatal shooting of Ahamaud Arbery in Georgia, prompted Antetokounmpo to speak out in May, tweeting: "I really don’t know how to put into words exactly how I feel, but one thing I know for sure is that enough is enough! It’s time for change! #GeorgeFloyd #AhmaudArbery"

"Obviously there’s consequences that happen with not going out there and as a team we decided to forfeit the game, but I did not even second-guess what I was doing even for a second," Antetokounmpo said. "As I said, I love G-Hill, I love Sterling. I’m proud of my teammates, everyone, that we were able to be in the right side of history."

The team was protesting the police shooting of Jacob Blake in Kenosha the preceding Sunday, Aug. 23. Blake was shot seven times in the back by Kenosha Police Officer Rusten Sheskey. The shooting remains under investigation.

The move prompted a wave of action across the NBA and other sports, where teams and athletes similarly sat out scheduled contests.

Kareem Abdul-Jabbar, a former Milwaukee Bucks MVP player and influential icon both on and off the court in his own right, wrote of Antetokounmpo in the TIME piece: "I once asked Giannis what his name meant, and he told me 'the crown has arrived.' It certainly has.