Extreme heat was the top concern at the Wisconsin State Fair on Tuesday, event officials encouraged people to do what they needed to stay cool.

From encouraging people to stay hydrated to offering misting fans, the fair wanted people to stay safe in the heat – also allowing water bottles to be carried in.

For Marty Newman, keeping cool at the fair may be challenging, but she had at least one idea.

"Lots of ice-cold beer," Newman said, enjoying the fair – but not the heat – with friends. "I think (the heat) is just God awful, and I can’t believe we picked this day to go."

Terry and Caroline Tindall could not ignore the day's heat either.

"It’s hot and I’m sweating. It’s starting to come down my head, but I’m enjoying everything at the State Fair. So, we’ll endure the heat and then go into the Expo Center," Caroline Tindall said. 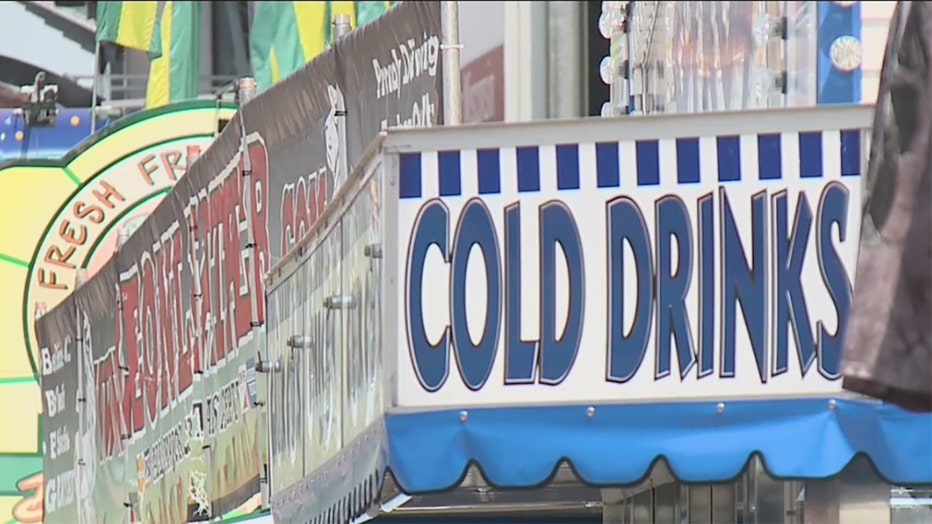 The occasional breeze still did not stop people from finding shade under a canopy, tree or even umbrella.

"I got a strawberry sundae. It’s awesome. Nice and cool…keeping me nice and cool," Lynda Burish said.

"These towels. We got maybe about 10 years ago from the State Fair and they’re really cold. Just get them wet," said Melissa Burish.

It was pretty simple for others to sum up how it felt to be out Tuesday.

"Super sweaty, the sun is just…even when the clouds go away for just a few seconds it really helps," Jade Moy said.

As the sun beat down on fairgoers, misting stations and air-conditioned pavilions offered relief, too.

The extreme heat turned to severe weather, delaying the Foreigner concert and forcing people to take cover and leave. Still, even storms and extreme heat could not stop some fairgoers.

"Like you’ve had the shower running on hot and then you decided to put your makeup on," said Shanna Bremer."It’s worth it every year no matter what."

Fair officials said there were emergency personnel at State Fair Park ready to deal with any heat-related issues.

An Oregon man is traveling the United States to visit 65 of the biggest cities in the country. On Tuesday, Aug. 10, he stopped in Milwaukee with two items on his agenda: learning polka and building his own cheesehead.

A COVID-19 vaccination or negative COVID-19 test result will be required to attend Summerfest 2021.