In one of the closest watched races in the United States, the Democratic Party of Wisconsin says Ron Johnson is trying to rewrite history and deny the reality of the Jan. 6 attack, while Republicans say Mandela Barnes' old tweets show his "rhetoric is too extreme."

MILWAUKEE - In one of the closest watched races in the United States, the Democratic Party of Wisconsin says Ron Johnson is trying to rewrite history and deny the reality of the Jan. 6 attack, while Republicans say Mandela Barnes' old tweets show his "rhetoric is too extreme."

Johnson again said the attack at the U.S. Capitol was not an armed insurrection. It took place as Congress met to count the Electoral College votes to officially certify President Joe Biden's election win.

"There weren’t thousands of armed insurrectionists. I asked the question of the FBI agent at a hearing on this. I said: ‘How many firearms were confiscated, either in the Capitol or on Capitol grounds?’ I didn’t know the answer. For all I know, it’s going to be a thousand. No – zero. Zero," he said Tuesday.

Attackers did wield baseball bats, mace and other weapons. Some are facing charges of having guns on Capitol grounds. The discrepancy between what the FBI agent testified and what is now found in court documents is likely because the FBI agent was referring to what that one agency found, while other law enforcement officers responded to the attack, including Capitol police and DC's Metropolitan Police Department.

"I don’t think they’d be able to reopen Congress about six hours later and complete the counting of electoral votes if there literally had been an armed insurrection," Johnson added.

Johnson's latest comments came at a Rotary Club of Milwaukee meeting Tuesday. He also compared the Jan. 6 attack to Black Lives Matter protests from the summer of 2020. He said most of those racial justice protests were peaceful, but some turned into riots. 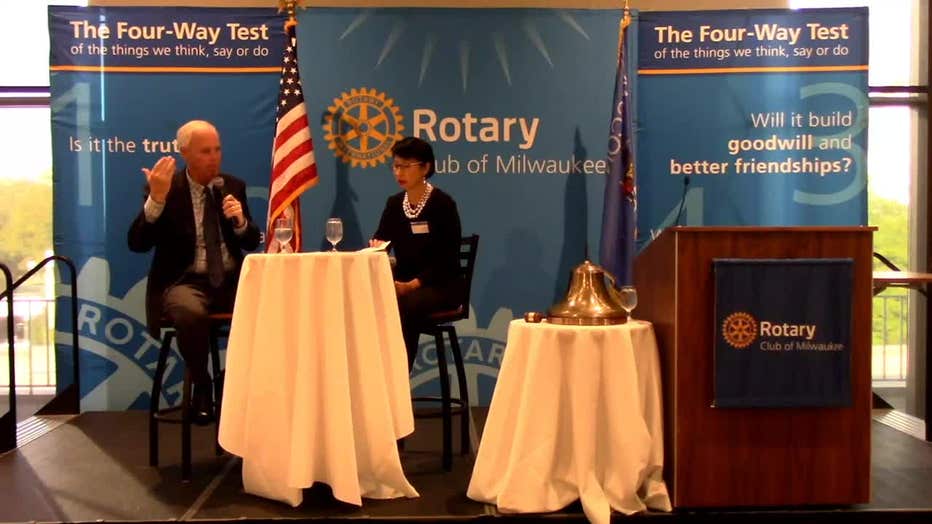 Ron Johnson at Rotary Club of Milwaukee meeting on Oct. 5, 2022

"Now, the summer protesters did teach us all how you can use flag poles, that kind of stuff as weapons, but to call what happened on Jan. 6 an ‘armed insurrection,’ I just think is not accurate. You saw the pictures inside the Capitol. I saw them that day. The ‘armed insurrectionists’ stayed within the rope lines in the rotunda. I’m sorry – that’s not what an armed insurrection would look like."

On Monday, before the latest comments, Barnes criticized Johnson: "Ron Johnson supported a violent insurrection that left 130 officers injured. A police officer got injured with a metal stake, another was crushed in a revolving door."

"I immediately and forcefully and repeatedly have condemned the violence on Jan. 6," Johnson said.

In this battleground state, Republicans have criticized Barnes for past tweets. After the 2016 Pulse Nightclub Shooting in Orlando, Florida, whose shooter pledged allegiance ot ISIS, Barnes tweeted "How many people have been driven to hate and act violently towards the LGBT community by ‘conservative Christian’ ideology?" and "So many terroristic enablers in churches, in Congress, and state houses. Whether by discriminatory policy or the love affair with guns." 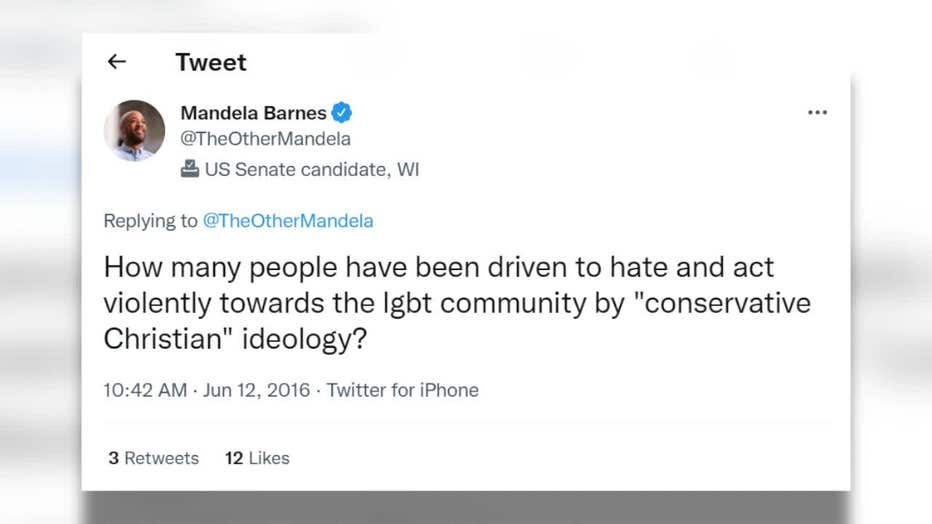 Regarding Barnes' tweet, at the time, he told The Capitol Times he was doing some necessary soul-searching for his own Christian religion.

The Johnson campaign responded: "Lt. Gov. Barnes’ disgraceful comments keep getting worse. First, he mocked the attempted assassination of a congressman, and now he apparently also believes Christian conservatives are ‘terroristic enablers.’ Not only are Lt. Gov. Barnes' policies too dangerous for Wisconsin, his rhetoric is too extreme."

The Johnson campaign is also running ads about that Barnes tweet in which Barnes criticized shooting victim U.S. Rep. Steve Scalise (R-Louisiana) for opposing gun reform. Barnes' tweet said Scalise was: "Taking one for the team. I question how people vote against self interest but this is next level. He literally almost died on this hill."

Barnes has since defended his words, stating: "This is a very personal topic for me as someone who has experienced the pain of losing friends and loved ones to gun violence. My comments came from a place of frustration with politicians like Ron Johnson who see gun violence happen every day and turn their backs on solutions that would keep people safe."