5 facts you might not have known about Valentine's Day

Here are five Valentine’s Day facts you might not have known about, as love in the air.

Valentine's Day just might be going to the dogs, cats, rabbits, birds, and other household pets.

Pet lovers this year will spend $1.189 billion (yes, billion) on their beloved animals for Valentine's Day.

That's according to new projections from the National Retail Federation (NRF), a nonprofit based in Washington, D.C., and Prosper Insights & Analytics. The new spending projections came out on Monday, Jan. 31, 2022.

Valentine’s Day spending overall in 2022 — on spouses, partners, friends, neighbors, pets, and more — is expected to reach $23.9 billion this year.

This year's Valentine's Day spending could be the second-highest year on record, according to the same annual survey.

The increase comes as many people intend to spend more on significant others or spouses. Candy (56 percent), greeting cards (40 percent), and flowers (37 percent) remain the most popular gift items this Valentine’s Day, the NRF said. 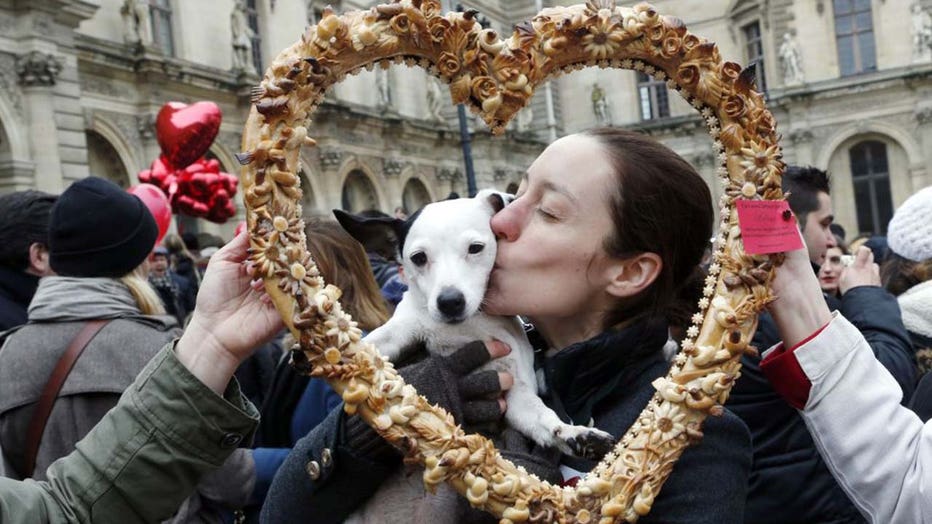 FILE - A woman kisses her dog while posing behind a heart-shaped pastry.

We sure love our fur babies

Samantha Ligotino of Hudson Valley, New York, said she loves giving gifts to her seven-year-old Jack Russell Terriers, Enzo and Jessie — and for her, Valentine’s Day is already starred and circled on the calendar for her fur babies.

"Why not spoil them on Valentine’s Day? You’ll get nothing but unconditional love in return. It doesn’t get any better than that," she added.

Ligotino joins many pet owners who feel the same way about pet gift-giving for Valentine's Day.

"Why not spoil them on Valentine’s Day? You’ll get nothing but unconditional love in return."

In 2020, 27 percent of those celebrating Valentine's Day said they were buying gifts for their pets.

"Much of the growth in Valentine’s Day spending over the last decade has been fueled by consumers’ interest in celebrating the other important relationships in their lives — friends, co-workers and, increasingly, pets," according to the NRF.

If pet owners are not pampering their beloved animals, they're spending more money in general on their beloved canines, felines, and other creatures.

One in five households acquired a cat or dog at the start of the COVID-19 pandemic, the American Society for the Prevention of Cruelty to Animals (ASPCA) said in a survey published last year, on May 21, 2021.

‘Major support’ during the pandemic

Erin Grdovich of New York said her dog Kona, a Golden Retriever, has been a "major support in getting through the pandemic and she's always given more than she takes."

Kona receives lots of goodies and attention, even if she doesn't dress as Cupid this year. However, she's likely to get plenty of Valentine's Day hugs and love from her Long Island family.