WASHINGTON - The Supreme Court’s nine justices met in private Thursday for the first time since the leak of a draft opinion that would overrule Roe v. Wade and sharply curtail abortion rights in roughly half the states.

The court offered no word on what was discussed in the gathering in the justices' private, wood-paneled conference room, other than to indicate at least one decision will be announced Monday.

By custom, no one aside from the justices attended and the most junior among them, Justice Amy Coney Barrett, was responsible for taking notes.

The abortion case is among 37 unresolved cases that were argued in the fall, winter and spring. The justices typically issue all their decisions by early summer.

Thursday’s conference came at an especially fraught moment, with the future of abortion rights at stake and an investigation underway to try to find the source of the leak.

Chief Justice John Roberts last week confirmed the authenticity of the opinion, revealed by Politico, in ordering the court's marshal to undertake an investigation. 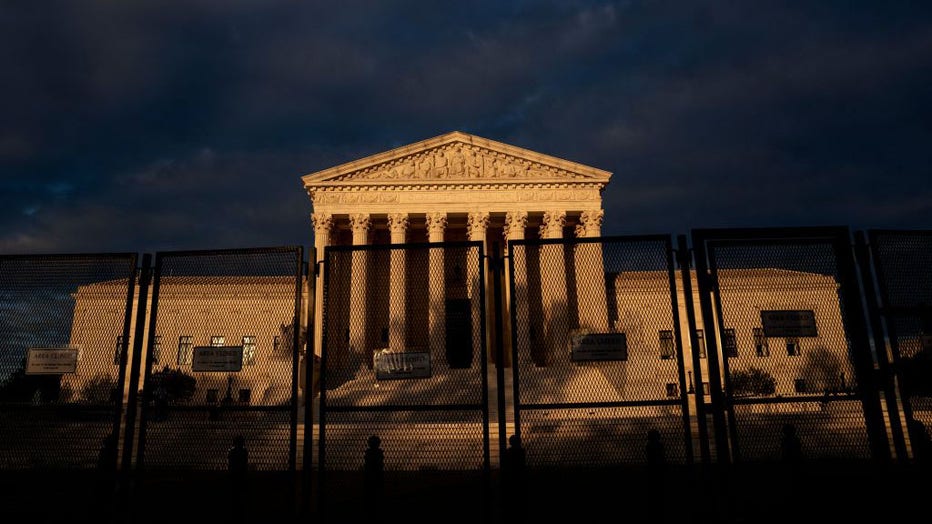 The U.S. Supreme Court is seen behind fences in Washington, D.C., on May 11, 2022. (Photo by STEFANI REYNOLDS/AFP via Getty Images)

Roberts stressed that the draft, written by Justice Samuel Alito and circulated in February, may not be the court's final word. Supreme Court decisions are not final until they are formally issued and the outcomes in some cases changed between the justices’ initial votes shortly after arguments and the official announcement of the decisions.

That's true of a major abortion ruling from 1992 that now is threatened, Planned Parenthood v. Casey, when Justice Anthony Kennedy initially indicated he would be part of a majority to reverse Roe but later was among five justices who affirmed the basic right of a woman to choose abortion that the court first laid out in roe in 1973.

Kennedy met privately with Justices Sandra Day O'Connor and David Souter to craft a joint opinion, with no hint to the public or even to other justices about what was going on.

"I think it’s tradition and decorum that everyone corresponds in writing about things that are in circulation," said Megan Wold, a former law clerk to Alito. "But at the same time, there’s nothing to prevent a justice from picking up the phone to call, from visiting someone else in chambers."

A major shift in the current abortion case seems less likely, at least partly because of the leak, abortion law experts and people on both sides of the issue said.

"I think the broad contours are very unlikely to change. To the extent the leak matters, it will make broad changes unlikely," said Mary Ziegler, a scholar of the history of abortion at the Florida State University law school.

Who are the Supreme Court justices?

Sherif Gergis, a University of Notre Dame law professor who once was a law clerk for Alito, agreed. "I’ll be surprised if it changes very much," Gergis said.

It's not clear who leaked the opinion, or for what purpose. But Alito's writing means that there were at least five votes in December to overrule Roe and Casey, just after the court heard arguments over a Mississippi law that would ban abortion after 15 weeks of pregnancy.

Roberts appeared the most inclined among the conservatives to avoid reaching a decision to overrule the landmark abortion rulings, but his questions suggested that he would at the very least vote to uphold the Mississippi law. Even that outcome would dramatically undermine abortion rights and invite states to adopt increasingly stricter limits.

If Roberts, who often prefers incremental steps in an effort to preserve the court's legitimacy, wanted to prevent the court from overruling Roe and Casey, he'd need to pick up the vote of just one other colleague. That would be enough to deprive Alito of a majority.

The liberal justices, Stephen Breyer, Elena Kagan and Sonia Sotomayor, are expected to dissent from either outcome. But no dissent, separate opinion from Roberts, or even a revised draft majority opinion has been circulated among the justices, Politico reported.

The demonstrators were protesting on May 11, 2022, in response to a leaked Supreme Court draft ruling published by Politico suggesting the landmark Roe v Wade decision would be overturned. Credit: Taylor Dabney/The Daily Signal via Storyful

Majority opinions often change in response to friendly suggestions and barbed criticisms. The justices consider the internal back-and-forth a crucial part of their work.

The lack of any other opinions surprised some former law clerks to the justices, though Wold said it's also true that bigger, harder cases traditionally take more time.

While there was no word whether the leak was discussed Thursday, several former clerks said they thought it would be.

"I would be shocked if it doesn’t come up," Wold said ahead of the meeting, adding that, given what has happened, the court would probably take additional precautions with drafts circulating in the future, including limiting who has access to them.

Kent Greenfield, a Boston College law professor who spent a year as a clerk to Souter, also speculated in advance that the leak would be on the table Thursday. "Roberts is in a complete bind. He has to address it, but it doesn't strike me that he has many options," Greenfield said.