LAS VEGAS, N.M. - New Mexico's governor on Tuesday asked President Joe Biden to declare a disaster as firefighters scrambled to clear brush, build fire lines and spray water to keep the largest blaze burning in the U.S. from destroying more homes in the foothills of the Rocky Mountains.

During a briefing on the fire burning across the state's northeast, Gov. Michelle Lujan Grisham signed a request for a presidential disaster declaration that will be sent to the White House in hopes of freeing up financial assistance for recovery efforts. She said it was important that the declaration be made on the front end rather than waiting until the fire is out.

"I’m unwilling to wait," said Lujan Grisham, a first-term Democrat who is running for reelection. "I have families who don’t know what the next day looks like, I have families who are trying to navigate their children and health care resources, figure out their livelihoods and they’re in every single little community and it must feel to them like they are out there on their own."

In the small northeastern New Mexico city of Las Vegas, residents were already voicing concerns about grocery stores being closed as some people chose to leave ahead of the flames even though evacuations had not been ordered. 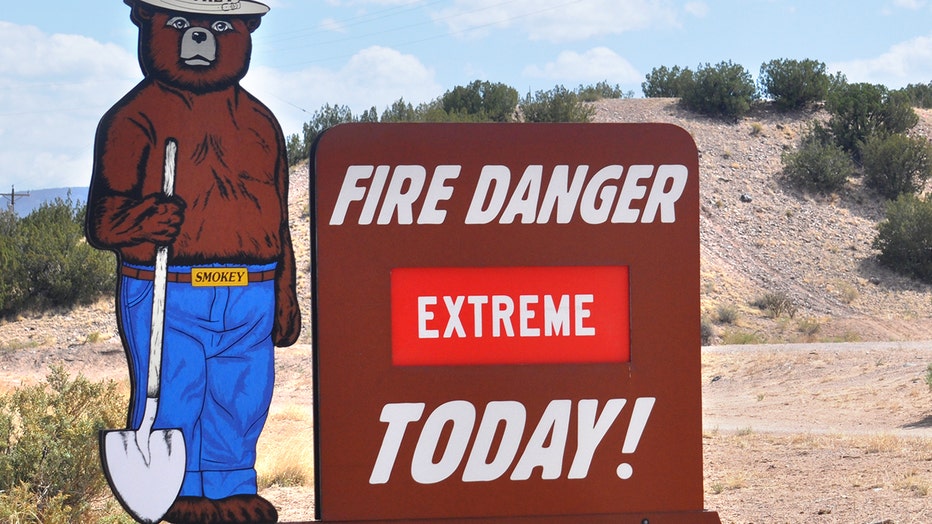 Fire managers told an evening briefing at the local community college that the spread slowed a bit on Tuesday, and put the amount of newly charred land up slightly, to about 231 square miles (598 square kilometers) of mountainsides, towering ponderosa pines and meadows.

Officials have reported about 170 homes destroyed, about 15,500 homes under mandatory evacuation and said the state’s psychiatric hospital in Las Vegas remained evacuated. Schools in the community canceled classes at least through Wednesday.

Dan Pearson, a U.S. Forest Service fire behavior analyst, called Tuesday "a brief reprieve from the extreme conditions we have been experiencing," but warned that winds are expected to increase and shift on Wednesday, pushing fire and smoke toward Las Vegas.

"Tomorrow, we're back to red-flag criteria," Pearson said, adding that forecasts called for better firefighting conditions on Thursday and Friday before winds increase and gusts whip to 50 mph (80 kph) or more during the weekend.

A battery of fire engines and their crews were busy Tuesday working to protect homes and other structures on the edge of Las Vegas while bulldozers cleared more fire lines on the outskirts. Air tanker and helicopter pilots took advantage of a break in the thick smoke and falling ash to drop fire retardant and water.

New Mexico was in the bull's eye for the nation's latest wave of hot, dry and windy weather. Forecasters also issued warnings for parts of Arizona and Colorado, and authorities in Texas urged people there to be careful after crews in that state had to respond to several new fires Monday.

The governor said during her briefing that the number of homes destroyed would likely go much higher given the ground that the fire has covered and the villages that it moved through over the past week.

San Miguel County officials said Tuesday they have been unable to get back into burned areas to continue assessments since conditions were too dangerous.

Wildfires have become a year-round threat in the drought-stricken West and they are moving faster and burning hotter than ever due to climate change, scientists and fire experts say. Fire officials also have said that many forested areas have become overgrown and unhealthy and that the buildup of vegetation can worsen wildfire conditions.

On the northern flank of the big New Mexico fire, crews were trying to keep the flames from reaching the town of Mora as the winds shifted. Bulldozed fire lines were holding, but state officials urged those residents who have refused to leave the area to reconsider, saying it's a dangerous situation.

Northeast of Las Vegas, on the other side of an interstate, is the Zamora Ranch. Owner Kenny Zamora has opened up his corrals and stables for livestock refugees, including 160 cattle, 50 horses, 70 sheep, 10 goats and a couple of pigs.

José Griego and wife Casey Taylor brought 10 horses and a small donkey to the ranch. Each has its own story: One was a wedding gift to the couple. Another is Griego’s go-to horse for rounding up cattle.

"Everything that’s breathing is out, and that’s what matters," said Taylor, who teaches science in a nearby community.

State livestock inspectors said green flags are flying at the entrances of ranches where livestock are left behind during evacuations so that responders know later.

The fire merged last week with another blaze that was sparked in early April when a prescribed fire set by land managers escaped containment. The cause of the other fire remains under investigation.

Another New Mexico wildfire burning through forested areas to the northeast has forced the evacuations of about 800 homes while charring 92 square miles (238 square kilometers).

A separate fire burning in the mountains near Los Alamos National Laboratory prompted the evacuation of about 200 homes. It has charred more than 39 square miles (101 square kilometers) and destroyed at least three homes.

Associated Press writers Paul Davenport in Phoenix and Ken Ritter in Las Vegas, Nevada, contributed to this report. Montoya Bryan reported from Albuquerque, New Mexico. Attanasio is a corps member for the Associated Press/Report for America Statehouse News Initiative. Report for America is a nonprofit national service program that places journalists in local newsrooms to report on under-covered issues. Follow Attanasio on Twitter.