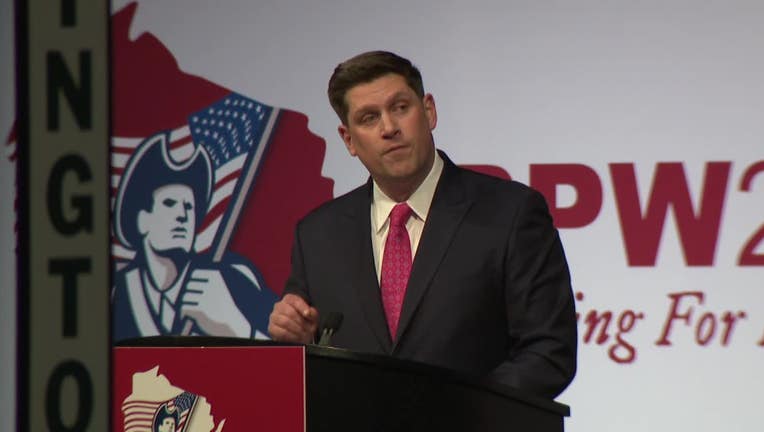 MADISON, Wis. - Republican Kevin Nicholson, a business consultant whose campaign for governor in battleground Wisconsin failed to catch on with conservative voters, announced Tuesday he was dropping out of the race five weeks before the Aug. 9 primary.

Nicholson said in a statement announcing the end of his campaign that it became clear to him that the only way forward "is attacking the other candidates in the race on the airwaves and running a very negative campaign."

"While our team has the capability to do that, that is not something I want to do — nor do I believe that it would be good for the party to do so," Nicholson said in his statement. "This election is too important for our state and our movement."

A Marquette University Law School poll released on June 22 had Nicholson at 10% compared with 27% for Michels and 26% for Kleefisch. State Rep. Timothy Ramthun was at at 3%, with 32% of respondents undecided.

Nicholson ran for U.S. Senate in 2018, losing in the Republican primary.

Nicholson said he would not endorse anyone before the upcoming primary. The Republican winner will advance to face Democratic Gov. Tony Evers in a race that's a national priority for both parties. Whoever wins will be governor during the 2024 presidential race in the state. Evers has served as a block on the Republican-controlled Legislature, vetoing numerous bills making it more difficult to vote absentee that were passed after Donald Trump lost the state in 2020.

"I’d like to thank Kevin Nicholson for the hearty debate and competition to make our state and conservative movement better. Moving forward, I humbly ask Nicholson’s supporters to join our team. I’ve taken on the Madison swamp before and won, and this fall, I will beat Tony Evers."

"As I've said repeatedly on the trail, I respect Kevin Nicholson. I respect his service to our nation as a Marine and his work with No Better Friend Corp. This race was better for him being in it, working as hard as he did, and pushing his outsider message about the need to shake up the Madison machine. I will work hard to earn the support of his supporters, as I continue to grow our coalition. It is imperative we defeat Tony Evers this fall and that's our continued focus."

"Kevin Nicholson leaving the race only means that there is one less radical Republican in the gubernatorial primary. Nicholson exposed deep divisions among Wisconsin Republicans who only want to move further to the right. Both Rebecca Kleefisch and Tim Michels are extremist insiders who are more worried about pandering to the ultra-MAGA base instead of doing what’s right for Wisconsinites. Just like Kevin Nicholson, Rebecca Kleefisch and Tim Michels continue to oppose access to abortion, refuse to accept the results of the 2020 election, and have failed to bring our state together."