Kenosha homicide suspect Tiron Washington – one of Wisconsin's Most Wanted – was arrested by local law enforcement in Tulsa, Oklahoma.

KENOSHA, Wis. - A Kenosha homicide suspect – one of Wisconsin's Most Wanted – was arrested Friday, May 27 by local law enforcement in Tulsa, Oklahoma.

On its Facebook page, the Tulsa Police Department released details Saturday regarding what led to the arrest of 33-year-old Tiron Washington.

Washington is charged with first-degree homicide, party to a crime – accused of shooting a man to death in Kenosha near 26th Street and 23rd Avenue in 2021.

Police said the shooting was not random. The victim was parked in his vehicle and was shot 13 times through his window.

Police said Washington is accused of stealing a vehicle out of Illinois to carry out the homicide. Officials said he tried to cover his tracks by switching vehicles after the shooting, but he left the murder weapon behind. 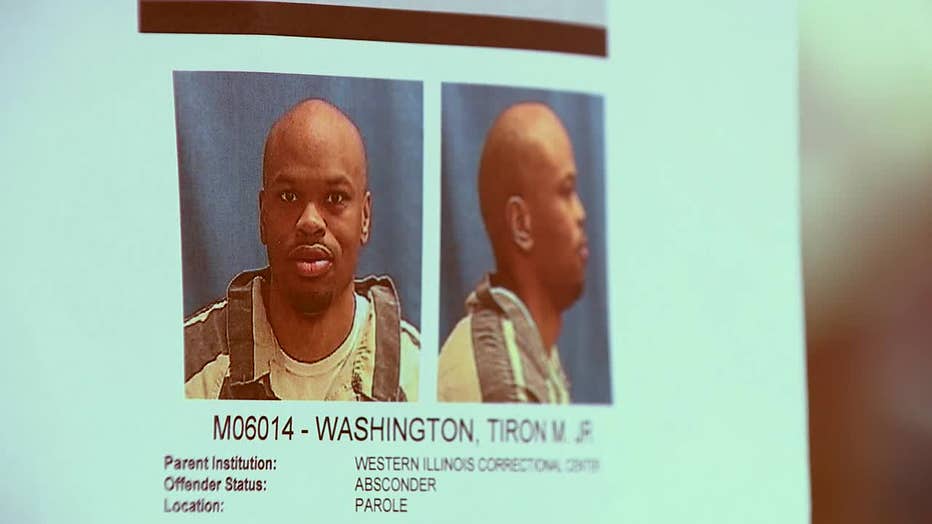 Around 10:15 a.m. Friday, police were called to a Greyhound bus station where someone had reported an armed man on the bus. Having guns is prohibited on Greyhound buses, so a manger called police to have the man removed.

Police de-boarded the bus before confronting the armed man, since identified as Washington. When officers approached him, police said he took off running.

Citizens flagged down officers, saying they saw Washington put a gun on top of the tire of a parked vehicle. Officers recovered the gun and kept looking for Washington.

Law enforcement established a perimeter. A construction crew, which had a "bird's eye view" from the rafters, spotted Washington hide underneath a vehicle. Officers moved in, but said Washington ran off again after spotting a K-9 officer – but he ran into a detective and was arrested without further incident.

In custody, police said Washington first have a Florida driver's license and a social security card with someone else's name on it as identification. Both turned out to be fake. He continued to give "bogus" names and dates of birth.

It wasn't until a fingerprint examiner was called, police said, that Washington provided his true identity. At that time, law enforcement learned of his multiple felony warrants out in both Wisconsin and Illinois – including for the Kenosha homicide.

Washington now faces additional charges in Oklahoma related to what transpired prior to his arrest.

He will be extradited to Wisconsin.