Vice President Kamala Harris was in the Milwaukee area Tuesday, visiting a UWM lab and touting the Biden administration's infrastructure plan during a roundtable discussion.

Harris also participated in a roundtable discussion about the investments in research and development proposed in Biden's infrastructure jobs plan, which would rebuild roads and bridges, boost broadband access and make other improvements.

The visit to Wisconsin is a homecoming of sorts for Harris.

Harris has been touting Biden's plan, unveiled in March, at stops across the country. In Milwaukee, she emphasized the $180 billion in proposed funding for research and development. Speaking at the roundtable, Harris said that would be the largest amount spent on research and development, other than in the military, in the history of the United States.

Harris said the U.S. has fallen behind in recent years and that it must be able to compete — with universities playing a big role — to pursue innovation that will improve the lives of American families.

"We must be able to compete," Harris said. "This is about where we stand in the global order of things, yes, but it’s also an investment in our ability as Americans to always have had the ability to see what can be, unburdened by what has been."

The labs Harris toured focused on wind tunnel and wind turbine research, and sustainable energy research on microgrids and batteries. Harris was told about one research project at UW-Milwaukee aiming to reduce the time to recharge an electric vehicle battery to just 15 minutes.

While some said they were excited to have Vice President Kamala Harris visit Milwaukee on Tuesday, May 4, others said they are hoping for more when it comes to policy.

While some said they were excited to have Harris visit, others said they are hoping for more when it comes to policy.

Solana Patterson-Ramos is a Milwaukee community member and Democrat. She said she was happy Harris visited the area.

"Our city is a very good city, and I love this city, and I think that showing that they do care," said Patterson-Ramos. "That our issues are being thought about and that our city is being highlighted."

As Harris' visit came to a close, a small group gathered near 2nd and Capitol with cellphones in hand -- hoping to get a glimpse of the vice president.

Eric Scott and others held up signs. He is with the group Americans for Prosperity-Wisconsin and said, while he is happy Harris visited the area, it is not enough.

Scott went on to say he does not agree with the president's $2 trillion infrastructure plan.

Vice President Harris participates in a round table discussion at UWM

Vice President Kamala Harris on Tuesday took part in a round table discussion at UWM, discussing investments in research and development in the American Jobs Plan.

Wisconsin Republicans said Harris' time would have been better spent at the U.S. border dealing with the increase of migrants trying to cross from Mexico.

Republicans used the Harris trip to renew their criticism of Biden's infrastructure plan as too costly.

Republican U.S. Sen. Ron Johnson, in a statement Tuesday, called Biden's plan a "boondoggle" and said he was interested to see how Harris justifies the spending.

"Instead of creating more opportunities, it will kill people’s jobs, increase their taxes, and further implement radical leftists’ agenda," Johnson said. "Happy to have her visit Milwaukee, but she really ought to inspect the crisis President Biden created at the border." 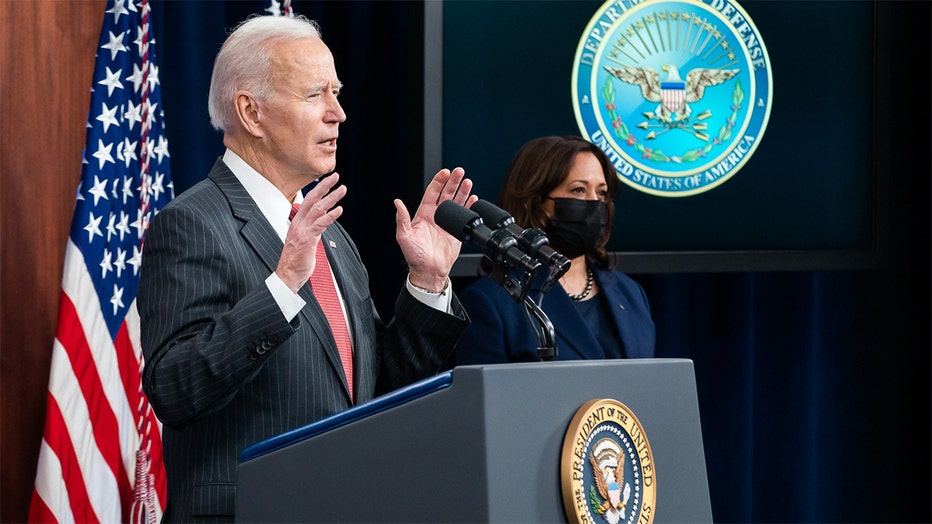 Early Tuesday, two Wisconsin Republican legislative leaders who recently visited the U.S. border in Texas sent Harris a letter criticizing her for not visiting southern border states. Biden has put her in charge of diplomatic efforts to address the root causes of migration to the U.S.

"We appreciate the visit to Wisconsin; but, respectfully, you have much bigger problems to deal with right now," Assembly Majority Leader Jim Steineke and Speaker Pro Tempore Tyler August wrote. "As the person who is supposed to be the most qualified to address this issue, we implore you to start taking action now to help our southern border."

The lawmakers also called on Democratic Gov. Tony Evers to do more to help secure the border, including sending aid. Texas has not asked for National Guard troops from Wisconsin, but in 2018 then-Gov. Scott Walker sent dozens to assist at the border. Evers withdrew Guard troops from the region shortly after taking office in 2019.

Air Force Two landed in Milwaukee ahead of Vice President Kamala Harris' visit to the University of Wisconsin-Milwaukee.

No taxpayer money was used for the border trip, which Steineke said was paid for in part with campaign donations. August said they were invited by the Texas Public Policy Foundation, a conservative think tank.

They called immigration at the border a "humanitarian crisis" that would affect Wisconsin and the entire country because people trying to enter there spread out nationwide. Steineke and August said local officials, including a Democratic county sheriff, said they are desperate for help.

"This should not fall on the backs of southern border states themselves," Steineke said. "It’s just as much about our security as theirs."

The Milwaukee Common Council approved directing the city's anti-harassment and intimidation policy to be changed to include elected officials.