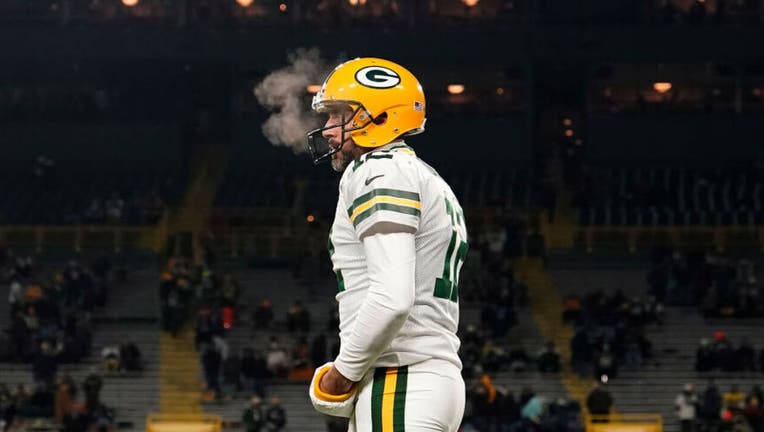 Tannehill looked much sharper in his second game back after missing two games with an injured right ankle. He went 22 of 27 and had one interception as the Titans (7-3) won for the seventh time in eight games.

The Titans improved to 10-2 when playing on short rest under coach Mike Vrabel. Green Bay (4-7) has lost six of seven.

Rodgers went 24 of 39 for 227 yards with two touchdown passes to rookie Christian Watson, a 14-yarder to close the first quarter and an 8-yarder in the third quarter. That followed Watson’s three-touchdown performance in a 31-28 overtime victory over the Dallas Cowboys on Sunday.

Watson became the first Packers rookie since Max McGee in 1954 to have multiple touchdown catches in consecutive games.

The Packers limited Tennessee’s Derrick Henry to 87 yards and a touchdown on 28 carries — a 3.1-yard average — but the Titans still posted season highs in points and yards (408) by throwing the ball better than usual.

Henry even got into the act by throwing a 3-yard jump pass to Austin Hooper for a touchdown. Hooper scored his first two touchdowns of the season. Treylon Burks, the Titans' rookie first-round pick, had the best game of his young career with seven catches for 111 yards.

Tannehill’s TD passes were a 14-yarder to Dontrell Hilliard and a 16-yarder to Hooper.

Tennessee led 7-6 at the end of the first quarter and then dominated the second, running 27 plays to the Packers’ six and outgaining Green Bay 91 yards to 17.

Tennessee started the quarter with a drive that lasted over 10 minutes but didn’t result in any points because Quay Walker stuffed Henry for a 2-yard loss on fourth-and-1 from the 4. Tennessee had the ball for 18 plays, the Titans’ longest scoreless drive since at least 2000.

But the Titans forced a punt, got the ball back on Green Bay’s 41 and extended their lead to 14-6 on Henry’s 4-yard touchdown run with 32 seconds left in the half. That was the first of three straight touchdown drives for the Titans.

Henry’s rushing TD was his 10th of the season, the fifth straight season he’s reached that mark. The only other players to have at least 10 touchdown runs in five straight seasons are LaDainian Tomlinson, Adrian Peterson, Shaun Alexander and Michael Turner. 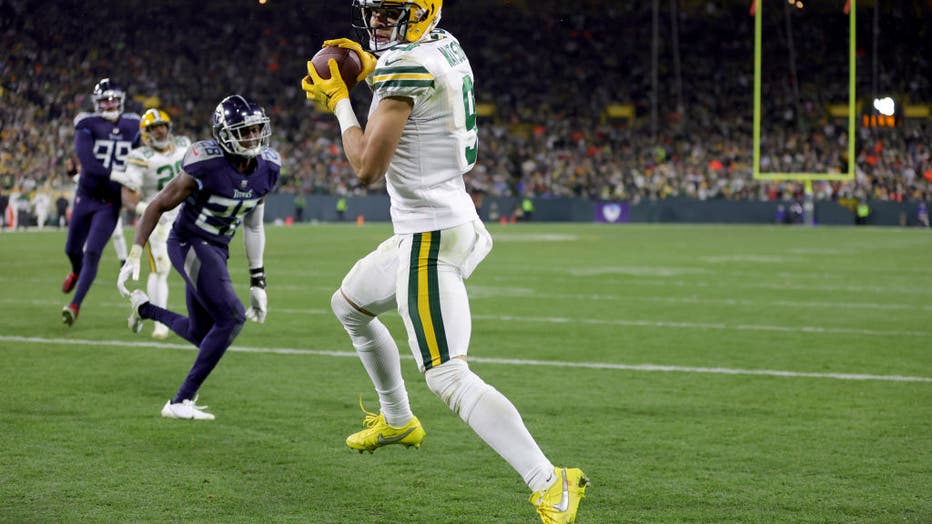 Watson's second touchdown of the night helped Green Bay narrow Tennessee's advantage to 20-17 late in the third quarter, but the Packers' offense did nothing the rest of the game.

The Titans extended the lead and scored their first fourth-quarter touchdown of the season when Hooper opened the period with his 16-yard catch from Tannehill. The play was originally ruled an incompletion but got overturned on replay.

As play got underway at Lambeau Field Thursday night, the Packers won the coin toss and deferred. The Titans would start with the ball.

Facing a 3rd and 7, the Packers' defense gave up a 44-yard completion to Titans' WR Treylon Burks.

The Titans would score on their opening drive courtesy Dontrell Hilliard. The score was 7-0 Tennessee with 10:30 left in the first quarter.

The Packers' offense went 3 and out to start.

Green Bay got on the board right at the end of the first quarter with a touchdown pass from Aaron Rodgers to Christian Watson. Mason Crosby's extra point was blocked, and the Titans remained in the lead 7-6 heading into the second quarter. Randall Cobb was instrumental during the drive, returning the punt, making a 24-yard catch and recovering an Aaron Jones fumble.

A good portion of the second quarter was taken up by a 10-minute, 18-play Tennessee drive that ended with nothing. The Packers' defense got the stop on fourth down. That left under 5 minutes remaining in the first half.

Green Bay's offense quickly went 3 and out, leaving the defense with little rest after that 10-minute Titans drive.

The Titans extended their lead just before halftime via a Derrick Henry touchdown. With the extra point, the score was 14-6.

A 39-yard field goal by Mason Crosby with just over 8 minutes left in the third cut Tennessee's lead to 14-9.

It didn't take long for Tennessee to put more points on the board. Titans QB Ryan Tannehill completed a 31-yard pass, and then Henry completed a 42-yard catch and run. Henry ended up throwing a TD pass to Austin Hooper. The Titans' extra point was no good, and the score was 20-9.

The Packers cut the Titans' lead with Christian Watson's second touchdown of the night. Aaron Jones ran in the 2-point conversion, bringing the score to 20-17.

A pass to Tennessee's Austin Hooper, originally ruled incomplete, was ruled a touchdown. This brought the score to 27-17 at the start of the fourth quarter.

Rasul Douglas came up big for the Packers early in the fourth with a pick. Unfortunately, Green Bay couldn't do anything with it and went 3 and out.

The Packers' defense was able to stop the Titans, and they punted. Keisean Nixon avoided the tackle and returned the punt for 24 yards – the longest Packers' punt return this season.

As the clock ran down, Aaron Jones was stuffed on 4th and 2 and the Packers' offense turned it over on downs.

One play later, the Titans were inside the 5-yard line after a pass to Burks.