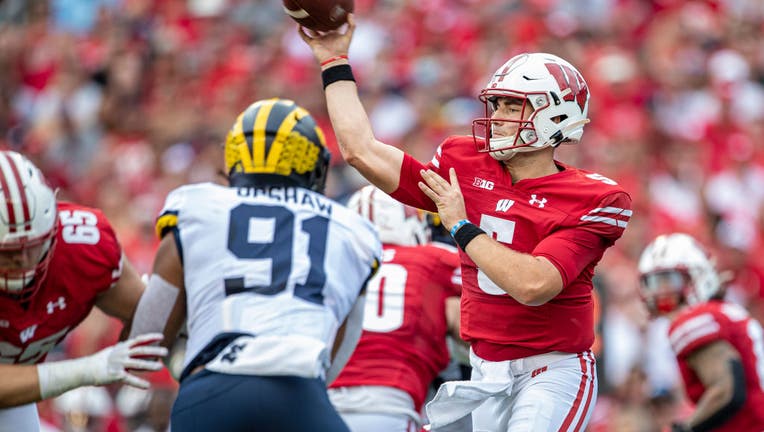 MADISON, Wis. - Cornelius Johnson caught both of Cade McNamara’s touchdown passes and No. 14 Michigan remained unbeaten Saturday with a 38-17 victory over Wisconsin, which lost starting quarterback Graham Mertz to a chest injury.

Wisconsin (1-3, 0-2 Big Ten) trailed 13-10 and had the ball to start the third quarter when Mertz was sacked by Daxton Hill on a third-and-9 play. Mertz and tight end Jake Ferguson both went to the locker room with chest injuries after that play, and neither returned to the game.

Once Mertz and Ferguson departed, Michigan scored 25 straight points to put the game out of reach.

The Wolverines (5-0, 2-0) won at Madison for the first time since 2001 by shutting down Wisconsin’s rushing attack, something Michigan had failed to do the last couple of seasons. Michigan had lost in each of its last five trips to Camp Randall Stadium.

Michigan led 10-0 and outgained Wisconsin 122-minus-2 for the first 20-plus minutes of the game as the Badgers failed to complete a pass or get a first down on any of their first four possessions.

The Wolverines opened the scoring on a flea-flicker that resulted in McNamara’s 34-yard touchdown pass to Johnson. McNamara and Johnson connected again on a 13-yard score in the fourth quarter.

Wisconsin got back in the game by scoring on its last two possessions of the first half. Mertz connected with Dike on a 36-yard completion and an 18-yard touchdown on consecutive plays to get Michigan's lead down to 13-10 with seven seconds left in the first half.

But once Mertz went down, the Badgers never threatened again.

U.S. Ryder Cup caption and Madison native Steve Stricker was recognized during a first-quarter timeout. The U.S. team won back the Ryder Cup with a 19-9 rout of Europe at Whistling Straits, located just outside Sheboygan, Wisconsin.

Michigan: The Wolverines had run the ball on 74% of their snaps this season heading into Saturday, but they changed their strategy against a Wisconsin run defense that ranked first in the nation. McNamara hadn’t thrown more than 16 passes in any of Michigan’s first four games. … The Wolverines showed plenty of boldness in fourth-and-short situations. They went 3 of 5 on fourth-down conversions, including McCarthy’s touchdown run.

Wisconsin: After being ranked 12th to start the season, the Badgers have dropped three of four games and now must worry about how soon they’ll get Mertz or Ferguson back. Wisconsin has lost seven of its last 13 games and has dropped eight straight to ranked teams. Mertz’s injury came just as he showed signs of bouncing back from his four-interception performance last week in a 41-13 loss to Notre Dame. … The Badgers played without usual starting center Joe Tippmann, who was poked in the eye during pregame warmups.

Michigan: At Nebraska on Saturday.

Wisconsin: At Illinois on Saturday.

The three-time Cy Young Award winner got hurt before Trea Turner hit a grand slam and solo home run as Los Angeles extended the NL West race for at least another day, rallying past the Milwaukee Brewers 8-6 Friday night.