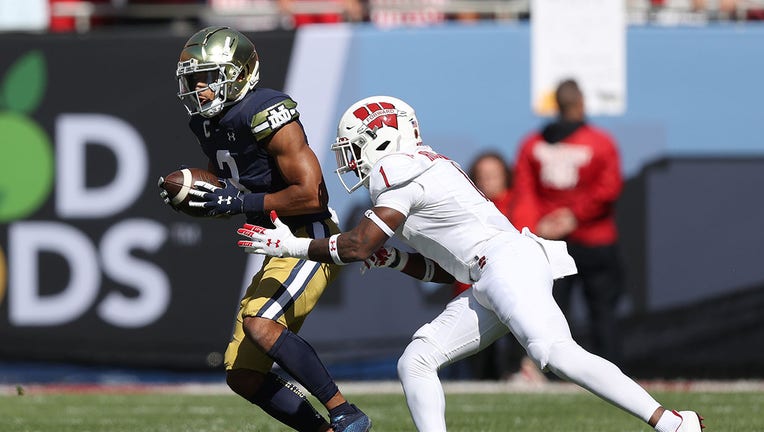 CHICAGO - Chris Tyree returned a kickoff 96 yards for a touchdown and Drew Pyne threw a touchdown pass in the fourth quarter in relief of an injured Jack Coan, helping No. 12 Notre Dame beat No. 18 Wisconsin 41-13 on Saturday at Soldier Field.

Brian Kelly became the winningest coach in Notre Dame history with victory No. 105, surpassing Knute Rockne in his 12th season with the Irish (4-0).

Graham Mertz threw four interceptions for Wisconsin (1-2), including two that were returned for touchdowns in the final 2:30 to blow the game open.

Coan, a Wisconsin transfer, left with an apparent left leg injury in the third quarter with the game tied at 10.

Pyne lost a fumble on his second possession, leading to a field goal by the Badgers, but otherwise the redshirt freshman was solid, going 6 for 8 for 81 yards.

Coan played 22 games for Wisconsin over three seasons and was the starter for the 2019 team that reached the Big Ten championship game. He broke his foot in the runup to the abbreviated Big Ten season last year and Mertz claimed the starting job.

A highly rated 2019 recruit, Mertz had some ups and downs in 2020, but Coan could see where things were headed and transferred to Notre Dame.

The Irish were in need of an experienced quarterback as they replaced Ian Book and Coan has turned out to be a solid fit.

Playing behind an offensive line that has used four left tackles so far this season, Coan completed 15 of 29 passes for 158 yards and a touchdown. He was sacked five times.

He limped off the field, favoring his left leg, midway through the third quarter and went to the injury tent, and then the locker room.

Pyne was blindsided by Rodas Johnson on his fumble. Jack Sanborn recovered the ball for Wisconsin at the Notre Dame 39.

The Badgers stalled in red zone, and Collin Larsh kicked a 27-yard field goal to put Wisconsin up 13-10 with 14:14 left in the fourth quarter.

The lead lasted 13 seconds. Tyree took the kickoff at the 4, found a seam to the left and turned on the speed. The sophomore outraced the Badgers for the touchdown that put the Irish up 17-13.

Notre Dame got a strip sack by Jayson Ademilola on Wisconsin's next possession, and Isaiah Foskey recovered on the Badgers 46.

The Irish capitalized behind Pyne, who completed four straight passes, including a 16-yard slant to Kevin Austin for a touchdown that made it 24-13 with 9:34 left.

Pyne celebrated his first career touchdown pass with a Conor McGregor-style strut, and he also pumped his fist.

Notre Dame: Freshman Tosh Baker started at left tackle and struggled mightily, giving way at times to Joe Alt, another freshman. The Irish offensive line has had a hard time replacing four players currently on NFL rosters and now has allowed 20 sacks in four games. They allowed 25 in 12 games last season when they reached the playoff.

Wisconsin: Mertz threw his first touchdown pass of the season, but was otherwise ineffective. The sophomore isn't Wisconsin's only problem on offense, but he is most definitely one of them.

Notre Dame: The Irish host No. 8 Cincinnati in a huge game for the Bearcats' playoff hopes.

Wisconsin: The Badgers return to Camp Randall to face No. 19 Michigan.

Packers' Jenkins out for 49ers game