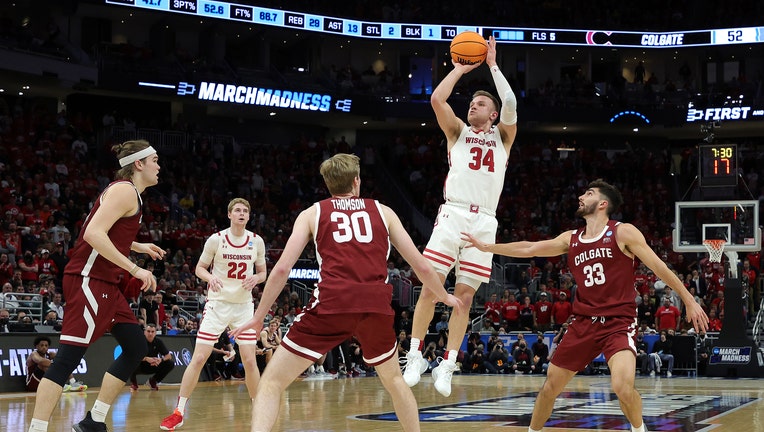 Brad Davison of the Wisconsin Badgers shoots against the Colgate Raiders in the first round of the 2022 NCAA Men's Basketball Tournament at Fiserv Forum on March 18, 2022. (Photo by Stacy Revere/Getty Images)

MILWAUKEE - All-American guard Johnny Davis scored 25 points and sparked a second-half comeback as Wisconsin withstood Colgate’s 3-point assault and beat the Raiders 67-60 in the first round of the NCAA Tournament on Friday night.

Davis had Wisconsin’s last 14 points and showed he’s all the way back from the injured left ankle that knocked the Big Ten player of the year out of the Badgers’ regular-season finale. Davis returned for the Big Ten Tournament but shot 3 of 19 in a quarterfinal loss to Michigan State, which also advanced through the first round of the NCAA tourney Friday night.

After shooting 3 of 11 in the first half, Davis caught fire when the Badgers needed him. They trailed by as many as five in the second half before going on a 10-0 run and holding Colgate scoreless for more than seven minutes.

Tyler Wahl added 15 points and nine rebounds for Wisconsin. Nelly Cummings scored 20 points and Tucker Richardson had 15 for Colgate, which shot 10 of 22 from 3-point range to nearly spring the upset.

Colgate entered the night second in the nation in 3-point percentage (.403) and 12th in 3-pointers per game (9.9). And that attack sizzled in the second half as the Raiders threw a scare into the partisan crowd that formed a sea of red at Fiserv Forum, which sits about 80 miles east of Wisconsin's campus.

The Raiders (23-12) made six of their first seven 3-point shots in the second half, with Tucker Richardson going 4 for 4 from beyond the arc in the first five minutes. Colgate led 52-48 after Jeff Woodward converted a three-point play with 10:40 left, but the Raiders wouldn’t score again until the 3:33 mark.

Steven Crowl hit a 3-pointer that put Wisconsin ahead for good with 8:08 remaining.

Wisconsin still led 56-52 when Richardson missed a 3-point attempt. While he pleaded for a foul call, Crowl got the rebound and passed to Davis for a dunk that capped the 10-0 run with 3:54 left in the game.

Wisconsin: Davis didn't score in the first 10 1/2 minutes but was huge when it mattered. The Badgers will need him to continue showing that second-half form if they're going to make a deep run in this tournament.

Colgate: The Raiders still haven't won an NCAA Tournament game, but they're showing they can compete with anyone. They gave Tennessee all it could handle before falling 77-70 in 2019, and they blew an early 14-point lead in an 85-68 loss to Arkansas last year.

Wisconsin faces Iowa State on Sunday for a spot in the Badgers' first Sweet Sixteen since 2017.

The Las Vegas Raiders have finalized their trade for All-Pro receiver Davante Adams.