WASHINGTON - President Joe Biden says he hopes his proposal to forgive federal student loans will narrow the nation's racial wealth gap. But a generation of Black and Hispanic Americans was disproportionately shut out of one of the keys to Biden's plan: the Pell Grant program.

As part of the "war on drugs" — a consequential, anti-crime legislative agenda that Biden championed as a U.S. senator — an estimated hundreds of thousands of convicted drug offenders had their access to federal financial aid delayed or denied, including Pell Grants and student loans. If they wanted to go to college after their prison terms ended, these offenders had to take on larger, often predatory, private student loans.

Some were discouraged from seeking federal aid by a requirement to disclose their drug record on financial aid applications, while others put off attending college or dropped out entirely.

The people most harmed by these policies: Black and Latino men, thanks to drug laws in the 1990s with harsh punishments for crack cocaine and marijuana offenses. Incarceration rates for men of color skyrocketed. The policies remained in place for 25 years, until Congress repealed the Pell Grant ban in 2020.

America’s student loan debt burden, which now tops $1.6 trillion, "is especially heavy on Black and Hispanic borrowers, who on average have less family wealth to pay for it," Biden said last week as he announced the forgiveness plan.

RELATED: What student loans are eligible for forgiveness? Here's a breakdown

The administration has offered to forgive up to $10,000 in student debt for individuals earning annual incomes of less than $125,000, or less than $250,000 for families. And its offer doubles the debt relief to $20,000 for borrowers who also received Pell Grants, a federal program that gives the neediest undergraduates aid that they don’t have to repay.

Studies show that Pell Grants — one of the nation’s most effective financial aid programs — routinely help more than half of Black students and almost half of Hispanic students afford college. According to the White House, among the 43 million borrowers who are eligible for debt relief under Biden’s plan, more than 60% are Pell Grant recipients.

The White House said in a statement to The Associated Press that the student debt relief plan will wipe away about half of the average debt held by Black and Hispanic borrowers, not counting the additional $10,000 cancellation for Pell Grant recipients.

President Biden laid out details of the Student Loan Debt Plan, forgiving $20,000 of debt for Pell Grant recipients and $10,000 for all other student loan borrowers. The payment pause has also been extended one more time through December 31, 2022.

Amid debate over whether Biden’s forgiveness plan goes far enough for disproportionately indebted communities, criminal justice reform advocates say the president’s solutions to the student debt crisis must be as comprehensive as the anti-drug laws were.

"I think there’s a particular onus on this administration and on this president to be part of the solution for issues that he was very deeply involved in," said Melissa Moore, the director of civil systems reform at Drug Policy Alliance.

There’s a generation of former drug offenders who borrowed to pay for school, but don’t have Pell Grants or federal loans, and won’t have any of their student debt forgiven. According to a Student Borrower Protection Center report on private loan debt, Black students are four times as likely as white students to struggle in repayment of private loans.

"For people who previously would have had to check that box, there should be some mechanism by which, if you were excluded in the past, you are prioritized now for relief," Moore said.

An AP review last year of federal and state incarceration data showed that, between 1975 and 2019, the U.S. prison population jumped from 240,593 to 1.43 million Americans, as a result of the war on drugs that President Richard Nixon declared in 1971. About 1 in 5 people were incarcerated with a drug offense listed as their most serious crime.

Following the passage of stiffer state and federal penalties for crack cocaine and other drugs, the incarceration rates for Black and Hispanic Americans tripled between 1970 and 2000. By comparison, the white incarceration rate only doubled in that same timespan. 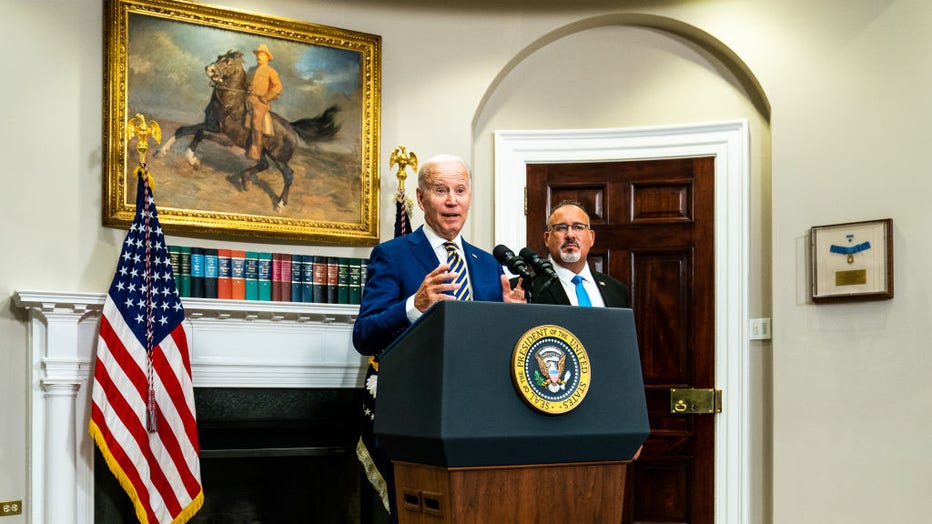 Biden's Violent Crime Control and Law Enforcement Act of 1994 put in place the ban on Pell Grants and other federal financial aid for people incarcerated in federal or state prison. However, then-Sen. Biden reportedly opposed the amendment that added the ban to his bill. At the time, his spokesperson said Biden believed education programs could break the cycle of recidivism among formerly incarcerated individuals.

Ultimately, Biden worked passionately to pass the crime bill he sponsored. Academic programs in federal and state prisons, which had been robust, dwindled severely nationwide.

Later, in 1998, Congress expanded the ban to exclude any student with a state or federal drug conviction from receiving Pell Grants and federal student loans, for as little as one year or indefinitely, depending on the number of convictions. Biden voted in favor of the measure, although his opinion on the Pell Grant provision was unclear.

In just the five years after the expanded ban took effect, the measure cost more than 140,000 would-be college students between $41 million and $54 million in Pell Grants per year, and between $100 million and $164 million in federal student loans per year, according to an estimate by the federal Government Accountability Office.

However, in 2006, Congress changed the ban on grants to drug offenders. It applied only to students whose convictions happened while they were receiving federal student aid, narrowing its effect significantly, although experts say the law still forced hundreds of enrolled students to drop out of college when they lost their aid. The ban on Pell Grants for incarcerated individuals was fully repealed when Congress passed the omnibus spending and COVID-19 relief legislation in December 2020.

Drug convictions no longer affect a student’s financial aid eligibility, although the question still appears on the Free Application for Federal Student Aid, or FAFSA. In April, the U.S. Department of Education expanded its Second Chance Pell Program, which provides grants to incarcerated students to help them enroll in academic programs. A further expansion of Pell Grants to incarcerated students begins in July 2023, according to the Department of Education.

Student loan cancellation, Pres. Biden to cancel up to $20,000 | LiveNOW from FOX

More than 40 million Americans could see their student loan debt reduced — and in many cases eliminated — under the long-awaited forgiveness plan President Joe Biden announced Wednesday, a historic but politically divisive move in the run-up to the midterm elections.

For DeAnna Hoskins, the legacy of the war on drugs nearly cost her much-need Pell Grants and student loans. She attended college after her incarceration and, by happenstance, just after Congress lifted the ban on aid to people with drug convictions.

"The ’94 crime bill was so comprehensive in the destruction that it did," said Hoskins, the president of JustLeadershipUSA, a criminal justice reform group. She questions how Biden’s debt relief plan was crafted. "I feel like you’re piecemealing our liberation back to us."

There are tens of thousands of people who had to get private student loans at high interest rates, because of the ban on Pell Grants, Hoskins added.

"This is why it’s so important, when decisions like this are being made, that the voices of people with lived experiences are present," she said. "We can help you obtain the equity you’re seeking."