Three people have been charged with vandalizing headstones at Racine's Mound Cemetery in 2020, according to charging documents filed on Jan. 14.

RACINE, Wis. - Three people have been charged with vandalizing headstones at Racine's Mound Cemetery in 2020, according to charging documents filed on Jan. 14.

A criminal complaint states that Racine police were dispatched to the cemetery for the vandalism report on July 31, 2020. A ground maintenance supervisor told police that suspects had "destroyed" around 30 grave sites overnight or the day before.

The charging documents and court records identify the three as:

Police took photos and found fingerprints on two of the 24 headstones that had been damaged. While no suspects were identified at the time, the fingerprints were sent to the Automated Fingerprint Identification System (AFIS) for possible matches.

On Dec. 27, 2021, the complaint states that AFIS returned a match on the fingerprints to Armstrong. Investigators then found Armstrong's cellphone number from the time of the vandalism and used it to obtain a GPS location – placing her in the area of the cemetery the night of the incident for around an hour and 45 minutes. The phone's records also showed Armstrong called one person during that time, Pfeifer.

The complaint states that, once in police custody, Armstrong admitted to being at the cemetery with Pfeifer and Murry. While there, Armstrong said she and Pfeifer began fighting and she pushed him into a headstone, breaking it. She said Pfeifer then ran off screaming and breaking other headstones. Asked about her fingerprints found on one of the headstones, the complaint states Armstrong "could provide no explanation."

Pfeifer also told investigators once in custody, according to the complaint, that he was at the cemetery that night with Armstrong and Murry. He initially said that Murry was doing all the damage to the headstones. However, when investigators provided Armstrong's version of events, Pfeifer changed his story – saying Murry and Armstrong did most of the damage but admitted that he broke a memorial flag and had threatened to stab himself with it. 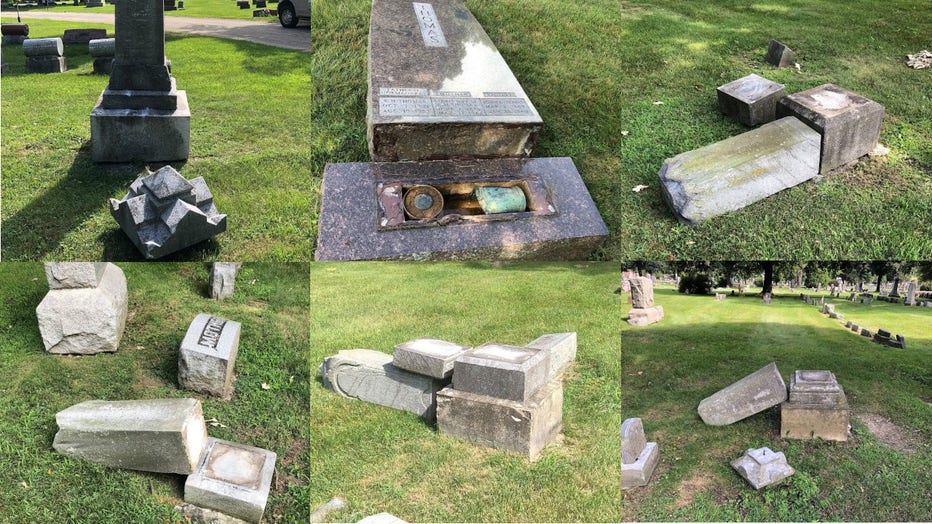 Vandalism under investigation at Mound Cemetery in Racine

All three are charged with one count of criminal damage to a cemetery/mortuary (as a party to a crime.)

Armstrong and Pfeifer made initial court appearances on Jan. 14 and are due back on Jan. 19. Murry had not been located as of Jan. 14, records show.

A man was arrested in Alabama, accused of trying to hire someone to kidnap and rape a Wisconsin woman he met online, federal court documents show.