MILWAUKEE - Republicans and Democrats agree on this – Wisconsin can play a key role in which party takes control of the U.S. Senate. That was the backdrop for President Joe Biden's Milwaukee visit on Monday, Sept. 5 when he spoke at Laborfest, nine weeks ahead of the midterm election.

Barnes' campaign explained why he wasn't there. "The Lt. Governor appreciates the President coming to Wisconsin to honor the labor movement in our state. Mandela walked in the Milwaukee parade and then went to support Wisconsin workers at events across the state, including in Racine where UAW Local 180 has been on strike for over 100 days."

The campaign of incumbent Republican Sen. Ron Johnson criticized their competitor. "Although Lt. Gov. Barnes invited Biden to campaign with him, he did not join Biden today in fear of Biden’s unpopular presidency. Barnes has supported the same out-of-touch policies that have left Biden reeling."

Gov. Tony Evers introduced President Biden to the stage. CNN reported Evers' aides urged Biden not to come for a July speech "so they could avoid being together." Evers himself said he was not involved in those discussions and welcomed the visit. On Monday, he also welcomed the president to the stage.

"President Biden has been a very important partner for states across the country to direct recovery funds towards schools, our economy, and public safety," Evers said. "He hasn’t forgotten that working families matter, not just on Labor Day, but every single day of the year."

The latest Marquette University Law School poll finds 40% of Wisconsin approves of how President Biden is handling his job – while 55% disapproves. Biden got a taste of that disapproval when a heckler interrupted his speech, calling Biden "a liar."

"Let him go. Look, everyone is entitled to be an idiot," Biden told the crowd, as security ushered out the heckler.

In Milwaukee, President Biden again condemned the most stringent of supporters of former President Donald Trump.

Air Force One touched down in battleground Wisconsin around 11 a.m. on Labor Day, which is seen as the start of the last rush to Election Day. Milwaukee Mayor Cavalier Johnson, Milwaukee County Executive David Crowley and their wives welcomed President Biden as he got off the plane.

Biden was in town for Laborfest, a Milwaukee tradition back for the first time since the pandemic began.

"This is one of the biggest Labor Day events in America you all have here," said Biden. "It’s a special day to me, as well."

President Biden was the third president to speak at the festival. It was the first time since 2014 that a United States president addressed the crowd. Bill Clinton and Barack Obama also rallied here in the past.

"You’re the best-trained workers in the world, and you deserve to be treated that way," said President Biden.

Union members and their supporters filled the crowd.

"Where is it written that America can’t lead the world in manufacturing? Where does it say that? We’ve exported too damn much," President Biden said.

Biden touted achievements he said are helping the Badger State and the nation.

"Wages are up, unemployment remains near a 50-year low and the big reason for all of this is the American Rescue Plan that I signed into law shortly after taking office," said Biden.

"We will, when this is over, have the best infrastructure, not a joke, in the entire world," Biden said.

That law includes money for lead pipe removal – a problem in Milwaukee.

"To make sure families have safe drinking water. Your child shouldn’t have to worry about turning on the faucet or going to the water fountain and worrying about any lead in the water," President Biden said.

He also hammered Wisconsin Republicans for not voting for the bills he talked about inside the Summerfest grounds.

"We got to remember who we are. We’re the United States of America. There’s nothing we can’t do if we do it together."

Air Force One arrives in Milwaukee with President Joe Biden

After his speech, President Biden shook hands with Wisconsin union members. Then, aboard Air Force One, he flew to another battleground state, Pennsylvania. Pennsylvania and Wisconsin are both states Biden won in 2020. Democrats hope to keep the momentum going this year, despite conventional wisdom that the party in the White House doesn't do as well in midterm elections.

The Wisconsin candidate for governor who Trump endorsed, Tim Michels, used Biden's visit to raise issues with Biden and Evers.

President Biden arrives in Milwaukee for visit to Laborfest

President Biden arrives in Milwaukee on Air Force One for a visit to Laborfest at Maier Festival Park.

"It’s so important that he understands the issues that are affecting the people of Wisconsin, but if I had the opportunity to talk to him, I would talk to him about inflation and how it’s out of control and the reason we have out of control inflation is because of the excess government spending that’s been going on," said Michels. 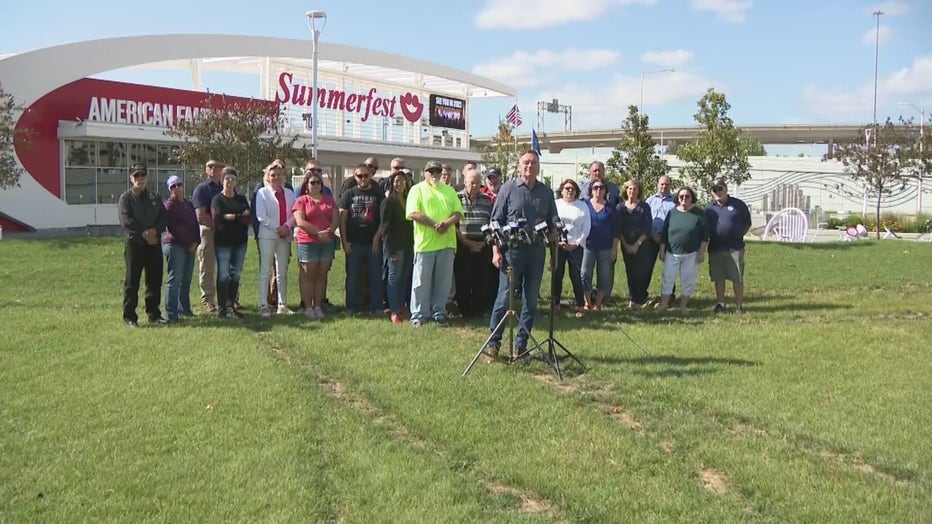 The Republican National Committee and Republican Party of Wisconsin, including Wisconsin Senator Ron Johnson, also spoke out Monday morning ahead of Biden's visit "to highlight the rising crime, historic inflation and costly failures of Joe Biden and Democrats."

"It’s an honor to have President Joe Biden and Secretary of Labor Marty Walsh join Wisconsin union men and women on Labor Day. We proudly welcome President Biden to Wisconsin to honor workers and celebrate all the labor movement has done to improve lives and workplaces. We look forward to continuing to work with the Biden Administration to uplift working families and build our American middle class with strong unions.

"While in office President Biden has passed historic advancements that will create jobs, raise wages, and help Wisconsin workers get ahead such as the bipartisan Infrastructure and Investment Act, the American Rescue Plan, the Inflation Reduction Act, putting a union member in charge of the Department of Labor for the first time in our nation’s history, strengthening the National Labor Relations Board to support workers and so much more.

"This Labor Day, as we take time to celebrate with our coworkers and loved ones, we honor the achievements of working people and we pledge to continue to work with the White House, Governor Evers, and all elected officials to advance the rights and freedoms of all working people in Wisconsin and America."

"President Biden’s policies are hurting workers. Workers are finding their paychecks are not keeping up with inflation due to the Administration’s reckless spending. The Biden Administration is not focused on the issues that matter to workers. We need to reduce inflation, unleash American energy, and make our communities safe."