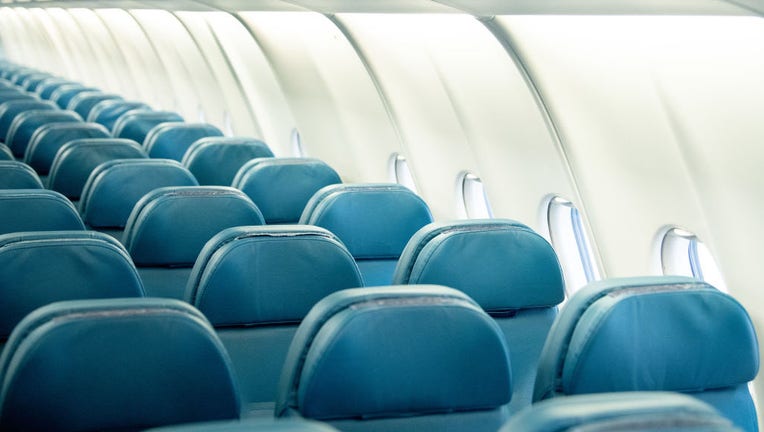 FILE - The interior of an Airbus SE A330 airplane at an airport in Chateauroux, France, on July 1, 2022. Photographer: Benjamin Girette/Bloomberg via Getty Images

A pilot recently threatened to return the plane back to its departure gate if passengers didn’t stop sending him "naked pictures" using the iPhone AirDrop feature, as captured in a viral TikTok video.

The pilot, appearing to operate a Southwest flight to Cabo San Lucas, Mexico, can be heard speaking to passengers over the plane’s intercom. The video has garnered more than 2.6 million views since being posted last week.

"So you folks, whatever that AirDrop thing is, quit sending naked pictures, and let’s get yourself to Cabo," the pilot added.

Apple’s AirDrop feature allows users to wirelessly send photos, videos, websites, and more to other nearby iPhones and other devices. For AirDrop to work, both Wi-Fi and Bluetooth settings must be enabled.

Southwest Airlines said in a general statement to FOX Television Stations that the "safety, security and wellbeing of customers and employees" remains its highest priority at all times.

"When made aware of a potential problem, our employees address issues to support the comfort of those traveling with us," the statement added.

Many commenters on the TikTok video weighed in, noting how his address to the plane gave "major dad vibes."

"That man said it like a parent," one person chimed in.

"I’m gonna turn this plane around and everyone’s vacation will be ruined. Haha major dad vibes," another added.

"Like a school bus driver with a bunch of rowdy kids," a third person wrote.

RELATED: Swiss DJ, accused of being on drugs in viral TikToks, actually suffers from impairment

Others pointed out how the pilot is in command of the aircraft.

"Pilot has ultimate authority. He doesn't need a reason. If he doesnt like something thats his choice," a commenter pointed out.

The AirDrop feature has been known to cause issues on flights in the past. Last year, passengers on a Delta flight from Atlanta to Seattle received a startling message that read, "A plane-jacking will happen soon, 2 hours and 37 minutes it will start in the front on aisle 6."

Cornelius Bome't told FOX 5 Atlanta that he was on the plane with his 14-year-old son when people began receiving the "terrifying" AirDrop message.

Law enforcement was notified and the plane was evacuated.

The Transportation Security Administration said there had been at least five incidents of threatening messages sent via AirDrop on planes in the past couple of years.

"TSA takes any threat to the safety and security of passengers and transportation systems seriously," the agency said in a statement in August 2021. "Our officers stand ready to support our local and federal law enforcement partners to assist with the response and subsequent investigation of incidents."

Facts you may not have known about Apple Inc.

Here are some interesting facts about the tech giant Apple Inc., including how the company got its name and who the original three founders were.

How to disable AirDrop on iPhone, iPad

For people who want to limit who can send them AirDrops, or turn it off entirely, visit the device’s "Settings" page.