President Joe Biden delivers his first State of the Union address on March 1, 2022.

WASHINGTON (AP) - House Speaker Nancy Pelosi had stern words Thursday for two of the most right-wing members of her chamber after their outbursts during President Joe Biden's State of the Union.

"I agree with what Sen. Lindsey Graham said, ‘Shut up.’ That's what he said to them. They should just shut up," the California Democrat told reporters about the conspicuous interruptions by GOP Reps. Marjorie Taylor Greene and Lauren Boebert during Tuesday's address.

The first incident took place as Biden was talking about immigration on the southern border. Greene, a Georgia freshman and member of the conservative House Freedom Caucus, stood up and began chanting, ‘Build the wall! Build the wall!’ in reference to the border wall former President Donald Trump began building during his administration.

The second incident happened as Biden began to discuss how his son Beau, who died of cancer, was among many veterans who may have suffered from toxic exposure to military burn pits used extensively in Iraq and Afghanistan. Beau Biden, a U.S. Army major, died in 2015. 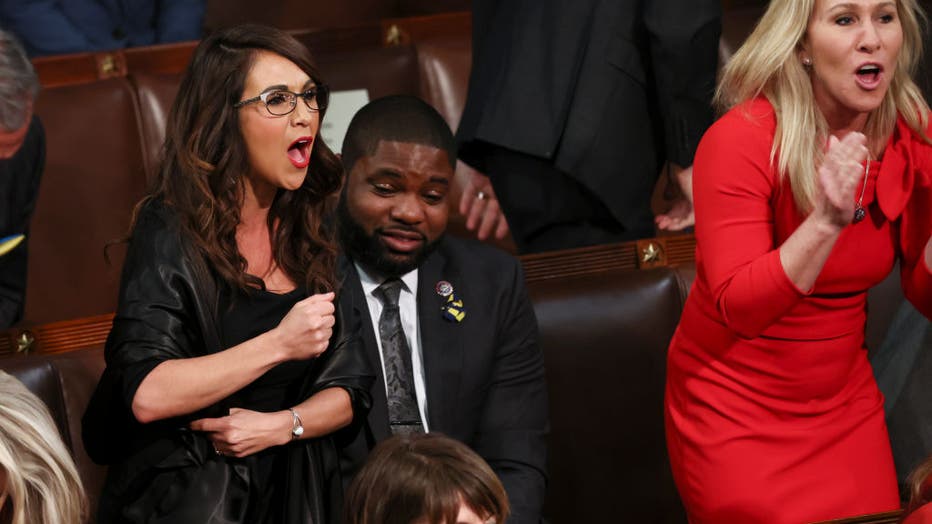 Rep. Lauren Boebert (R-CO) and Rep. Marjorie Taylor Greene (R-GA) scream "Build the Wall" as U.S. President Joe Biden delivers the State of the Union address during a joint session of Congress in the U.S. Capitol’s House Chamber March 01, 2022 in Was (Photo by Evelyn Hockstein-Pool/Getty Images)

"A cancer that put them in a flag-draped coffin," Biden started to say, when Boebert yelled, "You put them in. Thirteen of them!"

Boebert, a freshman from Colorado, said her comments were made in defense of the 13 service members who were killed during the U.S. withdrawal from Afghanistan last August.

In the chamber, the comment drew an outpouring of boos from Democrats, adding a note of political division to an address that received several moments of robust bipartisan applause. The television cameras were focused on Graham, a Republican from South Carolina, when the heckling occurred. He was caught on camera mumbling what appeared to be "shut up" under his breath in response.

Boebert responded to Pelosi's Thursday comments and said: "I will not shut up'' about what she called Biden’s failure in Afghanistan "and the 13 heroes we lost because of it."

The incidents were just the latest breach of decorum for a presidential address, an annual event where unruly behavior by lawmakers has become more frequent. Republican Rep. Joe Wilson shouted "you lie!" at President Barack Obama during a joint speech to Congress in 2009. Eleven years later, Pelosi ripped up a copy of Trump’s speech while standing behind him.