A woman talks with a local reporter after several people were shot at a medical building in Tulsa. ( Credit: Robert Jones via Storyful)

TULSA, Okla. - Four people were killed during a shooting at a Tulsa, Oklahoma, hospital Wednesday afternoon, according to police.

"We can confirm 4 people are deceased, including the shooter, in the active shooting situation at St. Francis hospital campus. Officers are still clearing the building. More info to follow," Tulsa police tweeted.

The shooting took place on the second floor of the Natalie Medical Building which is part of the Saint Francis Health System.

During a news conference, officials were unsure whether police shot the suspected gunman or they shot themselves. The suspect has only been identified as a Black male between 35-40 years old.

Police seized a rifle and a handgun from the scene and said it appears the suspected gunman used both during the incident. 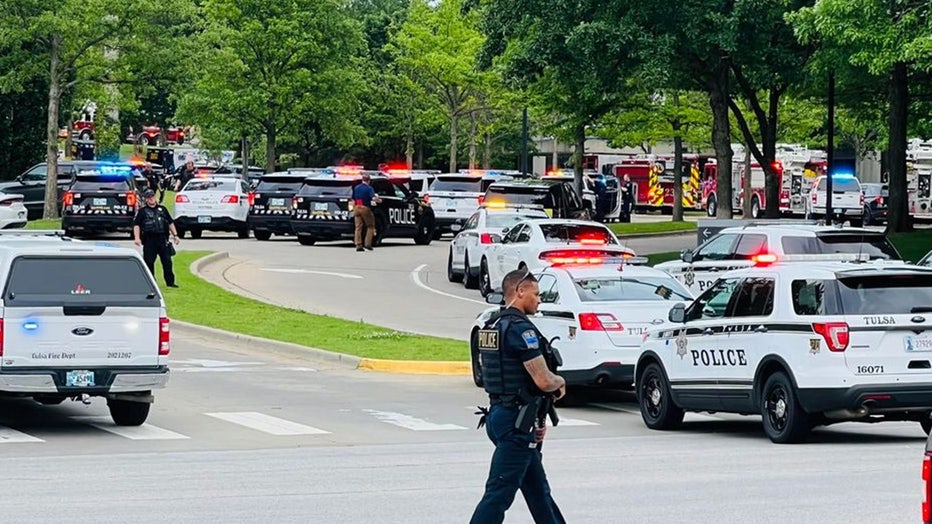 Investigators are interviewing witnesses at this time and the scene is secure.

Dozens of police cars could be seen outside the hospital complex, and authorities shut down traffic as the investigation went on.

A reunification center for families to find their loved ones was set up at a nearby high school.

LiveNOW spoke with Rick Maranon of FOX23 News about the scene of a deadly shooting at a medical building in Tulsa.

Agents from the Bureau of Alcohol, Tobacco, Firearms and Explosives were also at the scene, a spokesperson said.

"@ATFDallas (https://twitter.com/ATFDallas)Tulsa office personnel are on scene at St. Francis Hospital to provide assistance in the active shooter incident. Tulsa Police Department is the point of contact and will release more information as it becomes available," the bureau tweeted.

Earlier on Wednesday, the chief of police advised people to avoid the area near 61st and Yale Avenue, which is the location of the Natalie building, according to local news media.

"@TulsaPolice (https://twitter.com/TulsaPolice) has responded to an active shooter incident near 61st & Yale. Please stay away from the area and yield to all emergency vehicles as we deal with this response. We will update the media as soon as we are able to gather details," the tweet read.

Just a few days before the incident, Tulsa police apprentice officers underwent active shooter training to prepare for "real-life scenarios," according to a Facebook post from the department.

"All Tulsa Police Officers also receive updated training and learn new tactics around Active Shooter Scenarios during their In Service Training, which happens yearly. This training has been scheduled for months, but is incredibly timely due to the recent school shooting in Texas," the post read in part.

The past few weeks have been riddled with gun violence as Americans mourn the loss of life in Texas, New York, California and now Oklahoma.

News of the Oklahoma shooting comes less than two weeks after a tragic mass school shooting in Uvalde, Texas, which left 19 children and two teachers dead.

And just a little over a week after the Texas mass shooting, another shooting took place at a supermarket in Buffalo, New York, where an 18-year-old gunman killed 10 Black people.

And just one day after the New York shooting, on May 15, five people were injured and one person was killed inside a church in Laguna Woods, Calif.

Meanwhile, President Joe Biden over the weekend traveled to Uvalde, Texas, to grieve with a community that he said made clear to him they want to see Washington tighten gun laws in the aftermath of the shooting rampage that killed 19 children and two teachers. Biden heard similar calls for an overhaul of the nation’s gun laws earlier this month when he met with families of 10 Black people who were killed in a racist attack at a Buffalo supermarket.

A bipartisan group of senators held a private virtual meeting Tuesday to try to strike a compromise over gun safety legislation, but expectations remain low. Senators aren’t expected to even broach ideas for an assault weapon ban or other restrictions that could be popular with the public as ways to curb the most lethal mass shootings. Republican Sen. John Cornyn of Texas, who led the session alongside Sens. Chris Murphy, D-Conn., Kyrsten Sinema, D-Ariz., and Thom Tillis, R-N.C., called Tuesday’s talks a "very constructive conversation."

Meanwhile, House Judiciary Committee Jerrold Nadler plans to hold a hearing Thursday on the "Protecting our Kids Act" — a package of eight bills that has almost no hopes of passing the Senate but would serve as a marker in the debate. It includes calls to raise the age limits on semi-automatic rifle purchases from 18 to 21 years old; create a grant program to buy back large-capacity magazines; establish voluntary safe practices for firearms storage and build on executive measures to ban bump stock devices and so-called ghost guns made from 3-D printing.