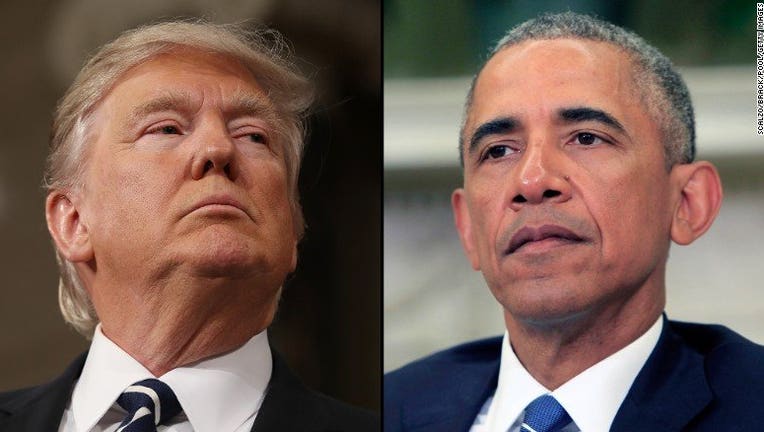 In a new clip from an interview slated to air Sunday morning with CBS's Gayle King, Obama reflected on the 2016 general election.

"When Donald Trump won, I stayed up until 2:30 in the morning and I then called Donald Trump to congratulate him. His margin of victory over Hillary Clinton wasn't greater than Joe Biden's margin over him," he said.

But Trump voters who rely on conservative media and tweets for their news often hear allegations of fraud presented as facts, Obama said.

"So you've got millions of people out there who think, 'Oh yeah, there must be cheating because the president said so,'" he added.

Trump, backed by GOP loyalists, has taken his assertions to court -- filing numerous lawsuits with little success so far.

On Saturday morning, Trump tweeted about the battleground state of Georgia, where President-elect Joe Biden leads by 0.3 percentage points and a hand recount is underway.

"The Consent Decree signed by the Georgia Secretary of State, with the approval of Governor @BrianKempGA, at the urging of @staceyabrams, makes it impossible to check & match signatures on ballots and envelopes, etc. They knew they were going to cheat. Must expose real signatures!" Trump wrote. "What are they trying to hide. They know, and so does everyone else. EXPOSE THE CRIME!"

Kemp and Secretary of State Brad Raffensperger are both Republicans. Stacey Abrams, a Democrat who narrowly lost the 2018 gubernatorial race to Kemp, has been credited with helping flip the longtime Republican stronghold.

On Thursday, the Cybersecurity and Infrastructure Security Agency called the 2020 election "the most secure in American history," with "no evidence that any voting system deleted or lost votes, changed votes, or was in any way compromised.”

Obama, the former two-term president, said Trump's refusal to concede is dangerous in a democracy, which relies on "the peaceful transfer of power -- the notion that any of us who attain an elected office, whether it's dog-catcher or president, are servants of the people."

While Obama remained largely off the radar during Trump's term in office, he stepped back into the spotlight during the 2020 election cycle to stump for Biden, his former vice president.

Obama has a 768-page memoir -- "A Promised Land" -- arriving in bookstores around the world on Tuesday.