According to the community briefing, Milwaukee police had pulled over a vehicle near 24th and Atkinson for excessive speed and no license plates around 5 p.m. As officers approached the vehicle, the driver, 19-year-old Lance Martin of Milwaukee, sped away. Police followed, tailing the suspect vehicle by about two blocks.

In the video, officers can be heard saying they had reached speeds of 70 mph.

From a distance, the suspect vehicle crashed south of Capitol Drive. Officers told dispatch that information as they came to the intersection of Teutonia and Capitol.

A silver SUV is seen coming from the east on Capitol, through the intersection at the same time as the police squad. The footage cuts out after the squad T-bones the SUV. Milwaukee police clarified why the video cut off. MPD said the video stopped because the squad car crashed not because of editing. 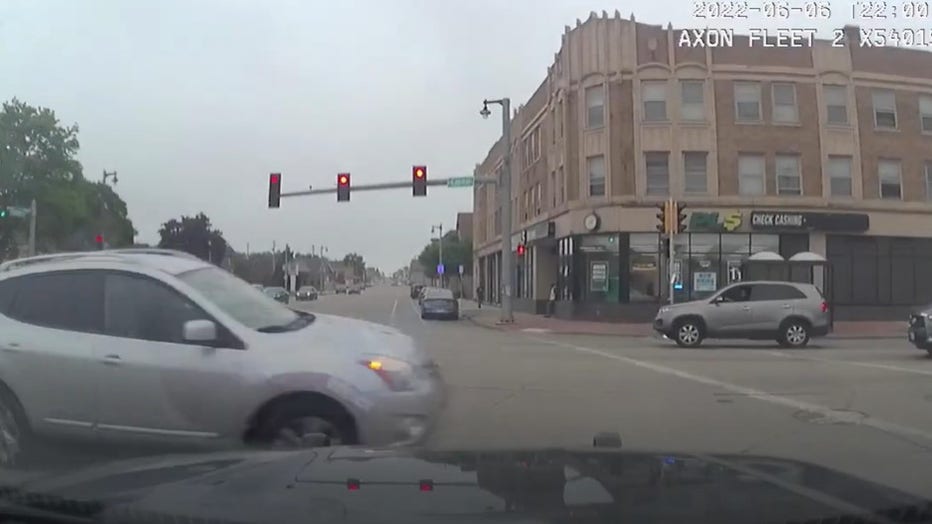 A still image from the community briefing video on a crash involving a Milwaukee police squad on June 6.

Police say one person in the SUV was taken to the hospital with life-threatening injuries and was listed in stable condition. One police officer had minor injuries.

This incident is being investigated by the Milwaukee Area Investigative Team. The Waukesha Police Department is the lead investigating agency. The officer involved was placed on administrative duty pending the outcome of the investigation.

FOX6 asked Waukesha PD when it plans to wrap up its investigation.

The department said, "The investigation is still open and active. As of now, it is unknown when it may be completed and turned over the Milwaukee County DA’s Office."

The Community Briefing video series was created by MPD to promote transparency and accountability with the public and to provide relevant information about critical incidents. MPD’s goal is to continue to release relevant video regarding critical incidents within a reasonable amount of time after the incident unless releasing such video would jeopardize the integrity of the investigation. Pursuant to the Milwaukee Police Department’s Standard Operating Procedure, a critical incident that involves the death or great bodily harm of a person will be investigated by an outside and independent law enforcement agency.