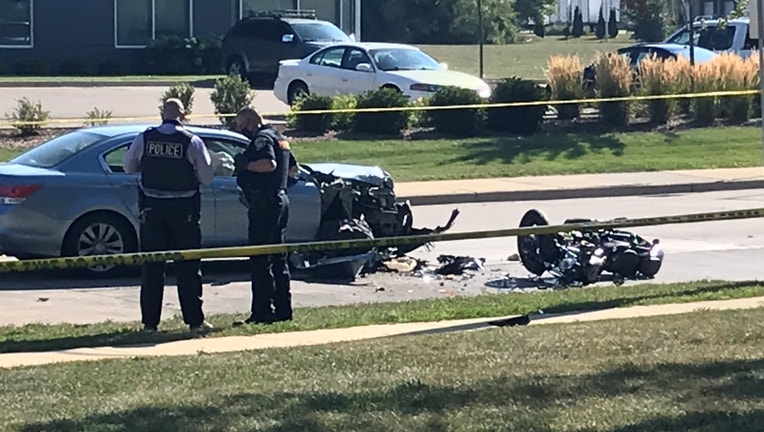 Fatal motorcycle accident near 49th and Burnham in West Milwaukee

MILWAUKEE - The Milwaukee County Medical Examiner's Office was called to a motorcycle accident in West Milwaukee on Friday, Aug. 21.

Officials said an adult man died as a result of the accident near 49th and Burnham. An autopsy is scheduled for Monday, Aug. 24.

The fatal accident on Friday is the third time in one week that a motorcyclist has been killed in Milwaukee County.

On Sunday afternoon, Aug. 16, a motorcyclist -- later identified as Tywell Williams -- was struck and killed near 35th and Wright in Milwaukee. Police said another motorist making a U-turn collided with Williams' vehicle. He was pronounced dead at the scene.

A vigil was held in Williams' honor on Wednesday, Aug. 19.

Two days later -- and just four blocks south -- a motorcyclist was killed in an accident near 36th and Lloyd. Police said the victim, a 36-year-old man, was hit when another vehicle made a left turn in front of him. The driver of that vehicle remained at the scene.

Both investigations are ongoing.

In addition to the fatal incidents, three other motorcyclists have been seriously injured in southeastern Wisconsin this month.

On Aug. 11, two motorcyclists from Sheboygan were struck and seriously injured on I-43 northbound, just north of the Marquette Interchange. The husband and wife involved believe they were "targeted" in the incident.

A 44-year-old man was hit from behind while on his motorcycle in Pleasant Prairie on Aug. 15. The impact sent the motorcycle across the intersection where the incident occurred and seriously injured the man. The striking driver fled the scene.

'We were targeted:' Sheboygan motorcyclists seek driver in hit-and-run on I-43 in Milwaukee

Both the husband and wife were hit and crashed their Harley-Davidson motorcycles. With the investigation at a stand-still, they took matters into their own hands -- tracking down the Wisconsin Department of Transportation video showing the wreck.

Vigil held for motorcyclist struck and killed near 35th and Wright

A vigil was held Wednesday a motorcyclist who was hit and killed near 35th and Wright in Milwaukee.

A 36-year-old man was killed when his motorcycle struck another vehicle near 35th and Lloyd.