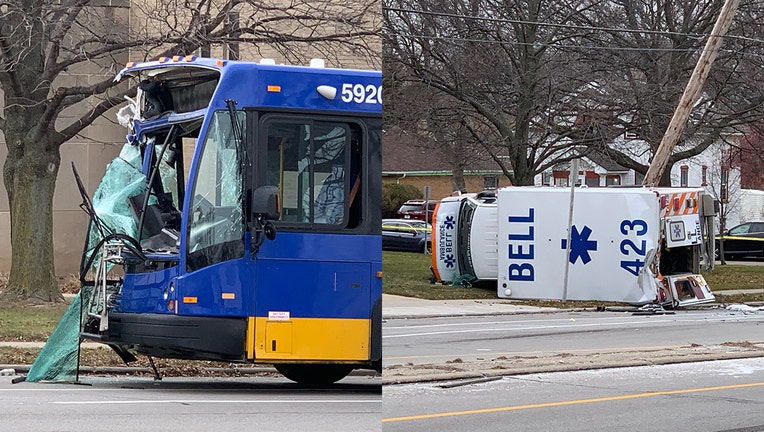 Scene of crash near 54th and Villard

MILWAUKEE - Bell Ambulance on Thursday, Dec. 16 said two EMTs injured in a crash the previous week near 54th and Villard are recovering.

On Dec. 7, a Milwaukee County Transit System bus collided with a parked Bell ambulance in Milwaukee. Bell said at the time that the ambulance was legally parked with its emergency lights on when it was hit.

Two EMTs and a patient in the ambulance were among four hospitalized as a result of the collision.

One of the EMTs continues to recover at home in good spirits, Bell said. The other EMT remains in the hospital but has been transferred from the intensive care unit to an inpatient room.

In a previous statement, MCTS said: "MCTS is cooperating with MPD as it investigates a serious accident involving an MCTS bus and an ambulance. Everyone at MCTS is following the situation closely as details emerge. Our hearts go out to all involved."

The Red Cross assembled a dozen different agencies under one roof Thursday to help Waukesha condo owners forced to evacuate their homes.

Milwaukee cleans up after strong winds down trees

Across the viewing area, people woke up, peeked outside and hoped they were spared any damage. Some were luckier than others.

The We Energies Power Outage Map, as of about 11 a.m. on Thursday, Dec. 16, was showing more than 48,000 without power in southeast Wisconsin.