Passions flared outside the Kenosha County Courthouse on the second day of jury deliberations in the Kyle Rittenhouse trial, a case that has been polarizing from the beginning. Two people ended up in handcuffs.

KENOSHA, Wis. - Passions flared outside the Kenosha County Courthouse Wednesday, Nov. 17 on the second day of jury deliberations in the Kyle Rittenhouse trial, a case that has been polarizing from the beginning.

Kenosha police said two people – a 20-year-old man and a 34-year-old woman – were arrested after an incident outside the courthouse.

Most protestors went home when the jury ended deliberations around 4:30 p.m., but before that, at around 3:45, arguments between protestors turned physical and two ended up in handcuffs. 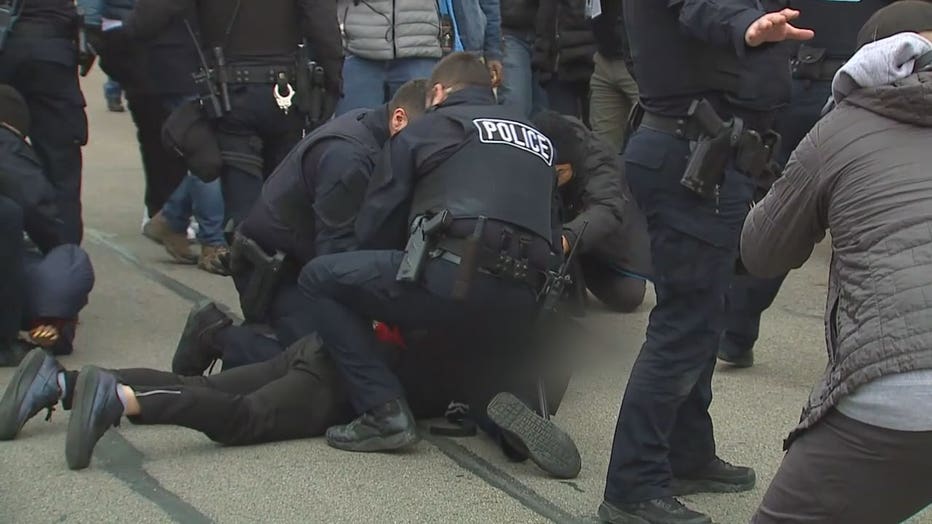 "The police came up and grabbed him because of the disturbance, I guess, and took him away," said Jeff Ransbottom, demonstrator.

Ransbottom watched it all unfold and said people on both sides of the debate did not condone what happened. 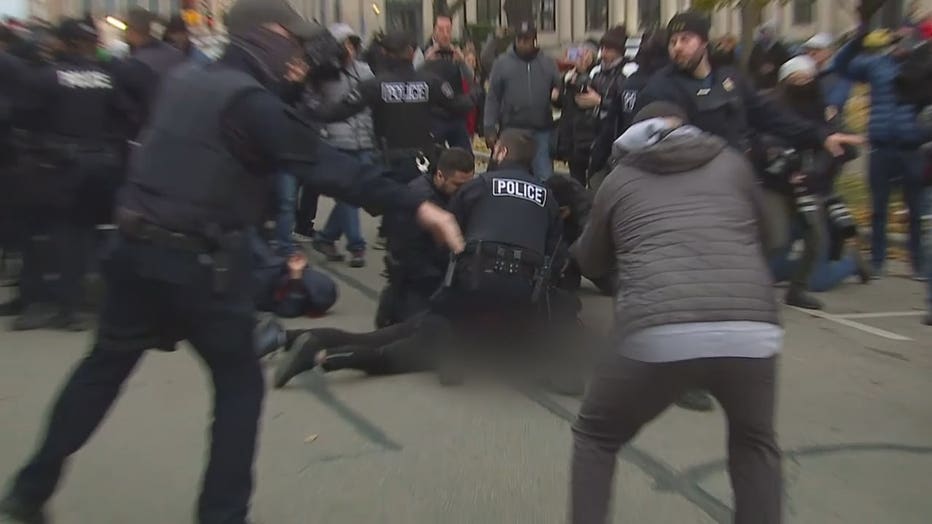 "It was more the group themselves that were upset it even happened," said Ransbottom. "It wasn’t like they were excited the violence happened. They weren’t. They were trying to make sure it didn’t happen, so that was kind of nice."

Gun rights groups and others are siding with Rittenhouse, who came to Kenosha at age 17 with a rifle he couldn't purchase on his own. The now-18-year-old's future hangs in the balance in this homicide trial.

Others are hopeful the length of deliberations shows the jurors are taking this case seriously, and this will achieve a just verdict for the men who were shot and killed.

Others hope their presence will keep people's rhetoric from boiling over. 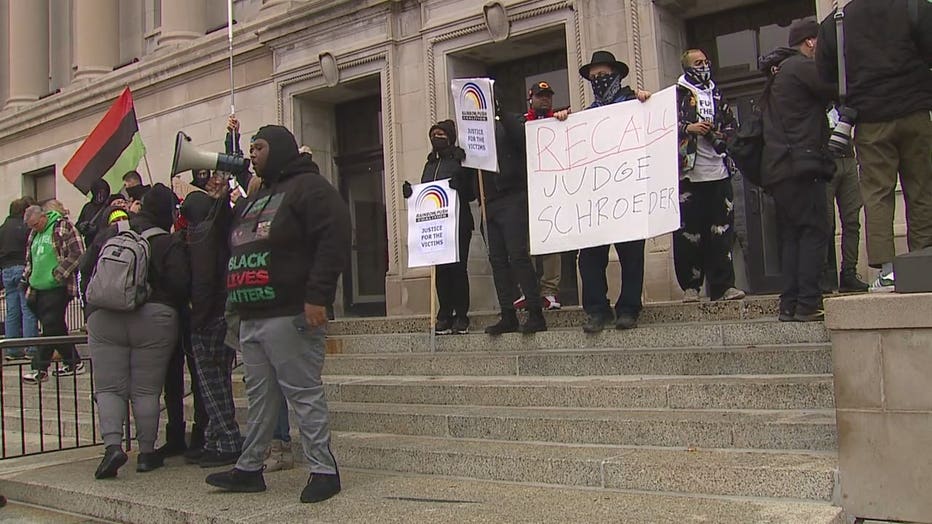 As dozens of people wait for a verdict, people are falling into different camps in the case, some standing quietly and others trying to raise their voices above the din.

As the deliberations reached noon Wednesday, the topic of how long deliberations have gone on rippled through those watching the case.

"They are taking the time necessary to make sure that they come away with a just and right verdict," said Bishop Tavis Grant, Rainbow PUSH Coalition national field director. 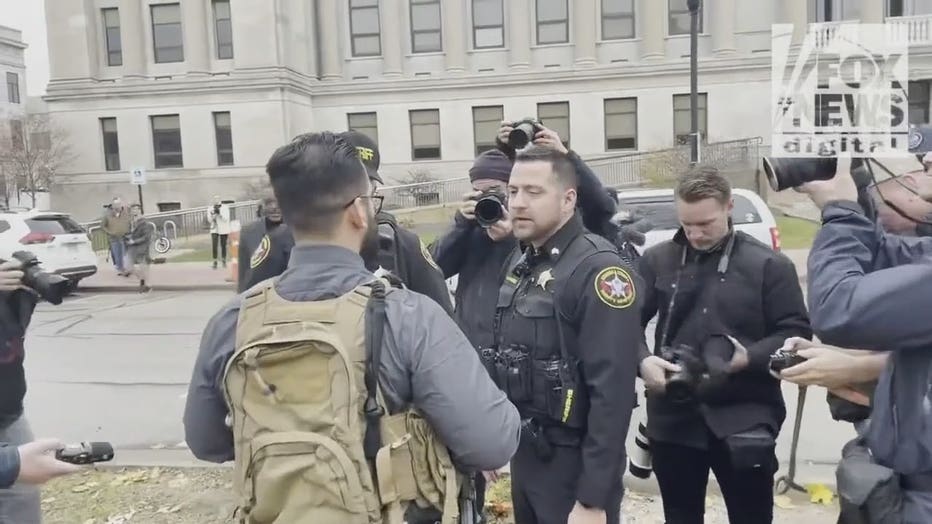 At one point, demonstrators fell silent as they listened to the judge, prosecutors and defense debate on a question from the jury.

"We’re very hopeful that the jury is taking a real close look at the most important evidence, which is the video," said Grant.

That video evidence has been seen by millions across the country. The case has also drawn people from near and far.

"To show support for Kyle Rittenhouse and to defend the (Second Amendment)," said Emily Cahill of Plainfield, Illinois on why she came to Wisconsin. 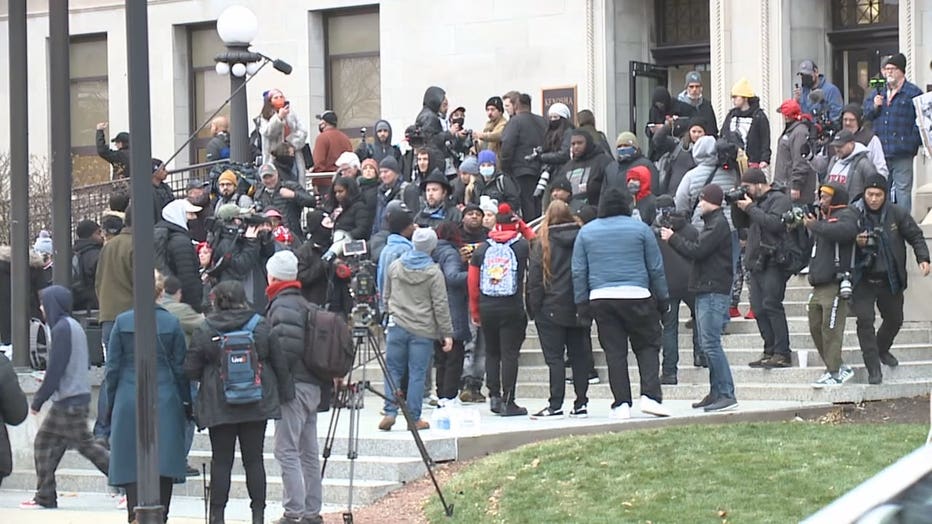 Attorney Kimberley Motley asked that people be patient. She represents Gaige Grosskreutz and the estate of Joseph Rosenbaum, the men who were shot and killed.

Kyle Rittenhouse's attorneys asked the judge on Wednesday to declare a mistrial before the jury reaches a decision, saying the defense received an inferior copy of a key video from prosecutors.

Wisconsin State Fair is offering a way to brighten up the holidays with a sale on admission tickets.