President Joe Biden gave an update on America’s COVID-19 vaccination progress as the rate of administering the shots picked up in recent days.

Attorneys general from Alaska, Arkansas, Iowa, Missouri, Montana, Nebraska, New Hampshire, North Dakota, South Dakota and Wyoming signed on to one lawsuit, which was filed in a federal district court in Missouri. Another group of states including Georgia, Alabama, Idaho, Kansas, South Carolina, Utah and West Virginia filed a lawsuit in federal district court in Georgia.

The states asked a federal judge to block Biden’s requirement that all employees of federal contractors be vaccinated against the coronavirus by Dec. 8, arguing that the mandate violates federal procurement law and is an overreach of federal power.

"If the federal government attempts to unconstitutionally exert its will and force federal contractors to mandate vaccinations, the workforce and businesses could be decimated, further exacerbating the supply chain and workforce crises," Missouri Attorney General Eric Schmitt, a Republican, said in a statement. "The federal government should not be mandating vaccinations, and that’s why we filed suit today – to halt this illegal, unconstitutional action."

New Hampshire’s Republican Attorney General John Formella said in a statement that COVID vaccines are safe, effective and encouraged but that the benefits "do not justify violating the law."

Florida sued on Thursday, bringing to 19 the number of states challenging the Biden administration mandate in four federal courts.

Biden has argued that sweeping vaccine mandates will help end the deadly pandemic, but Republicans nationwide have opposed the vaccination requirements and have threatened to bring similar legal challenges.

Texas filed a similar lawsuit Friday in a federal district court in a federal court in Galveston, Texas, seeking to block enforcement of the mandate. 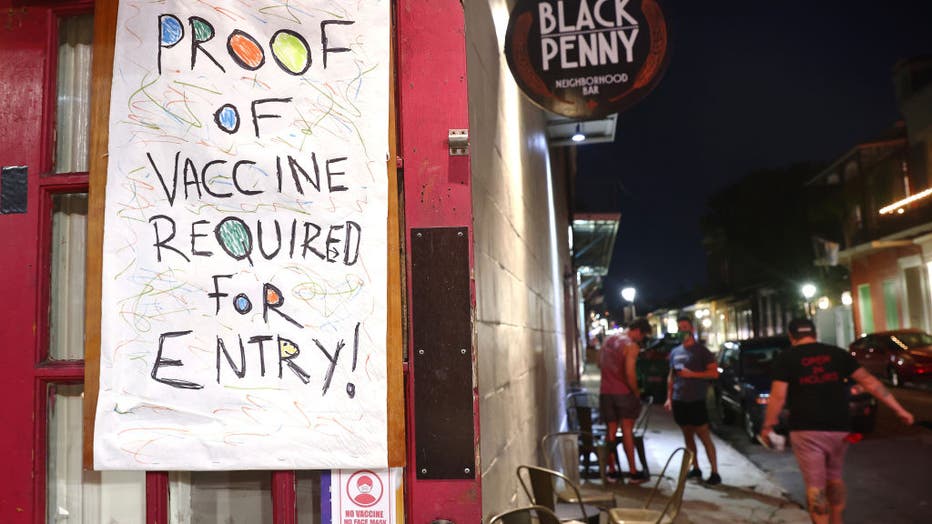 A sign reads 'Proof Of Vaccine Required For Entry' at a bar in the French Quarter on Aug. 16, 2021 in New Orleans, Louisiana. (Photo by Mario Tama/Getty Images)

"The Biden Administration has repeatedly expressed its disdain for Americans who choose not to get a vaccine, and it has committed repeated and abusive federal overreach to force upon Americans something they do not want," said Texas Attorney General Ken Paxton, a Republican, in a statement. "The federal government does not have the ability to strip individuals of their choice to get a vaccine or not. If the President thinks his patience is wearing thin, he is clearly underestimating the lack of patience from Texans whose rights he is infringing."

A number of states have also said they will challenge Biden's plan to have the U.S. Occupational Safety and Health Administration issue a rule that would mandate vaccines for all private businesses with 100 or more employees.

"We will not allow the Biden administration to circumvent the law or force hardworking Georgians to choose between their livelihood or this vaccine," Republican Gov. Brian Kemp of Georgia said in a statement.

The Democratic Party of Georgia called the lawsuit a "dangerous political stunt."

Florida filed a separate lawsuit against the federal mandate on Thursday. All the suits argue that the president doesn’t have the authority to issue the rule and that it violates procurement law. The suits also argue that the rule violates the 10th Amendment reserving power to the states, illegally uses federal spending to coerce the states, and that 60 days of public comment wasn't properly allowed.

The Georgia-led suit, for example, argues that such a rule could only stand if Congress passed it in a law.

All but two of the states that have sued trail the national average in vaccination rate. Only New Hampshire and Florida exceed the nationwide rate.