July 18, 1996, was a hot and very humid day across Wisconsin, with the threat of afternoon storms. A warm front that brought record rainfall to Illinois that morning caused a surge of humidity over the area, and a cold front lurking in the distance was primed to spark explosive storm activity.

OAKFIELD, Wis. - July 18, 1996, was a hot and very humid day across Wisconsin, with the threat of afternoon storms. A warm front that brought record rainfall to Illinois that morning caused a surge of humidity over the area, and a cold front lurking in the distance was primed to spark explosive storm activity. 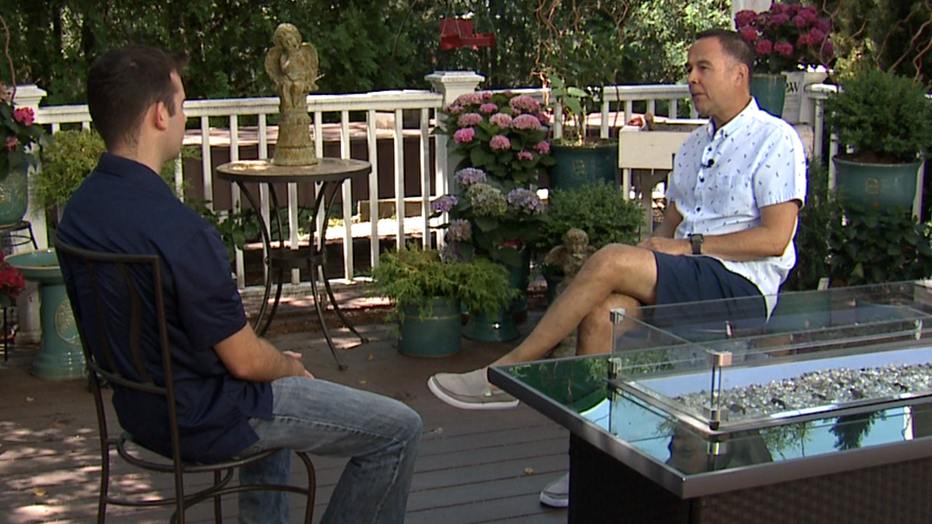 Retired FOX6 Chief Meteorologist Vince Condella was working that day and remembered just how strong the potential for severe weather was.

"So the dew points, I think, in the morning, were already pretty high, upper 60s or 70, but by later in the afternoon, I think the dew point was like, 78, so we know something big was going to happen," he said. 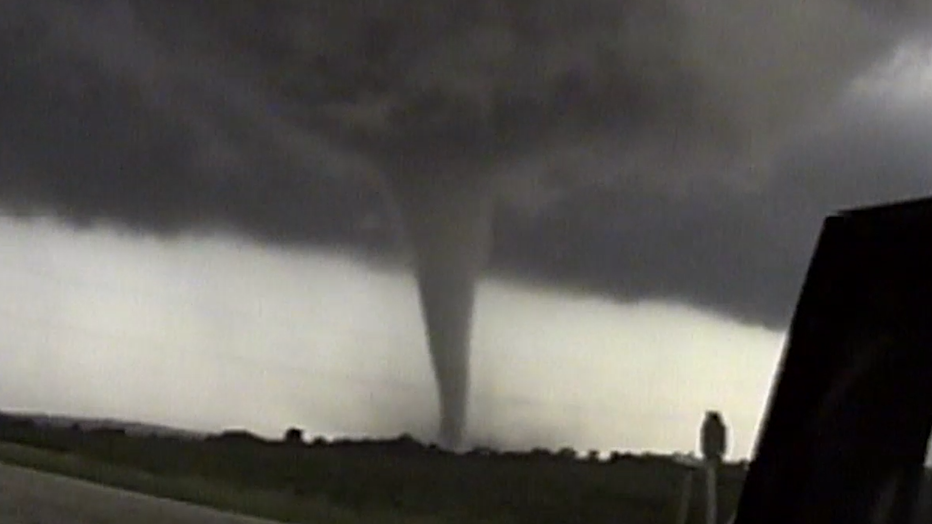 Vince was right. The excessive humidity, fueled with evapotranspiration from crops that afternoon, set the stage for a significant severe weather event. Around 7:05 p.m. that evening, a rotating thunderstorm in Fond du Lac County produced a tornado about 4 miles west of the Village of Oakfield. 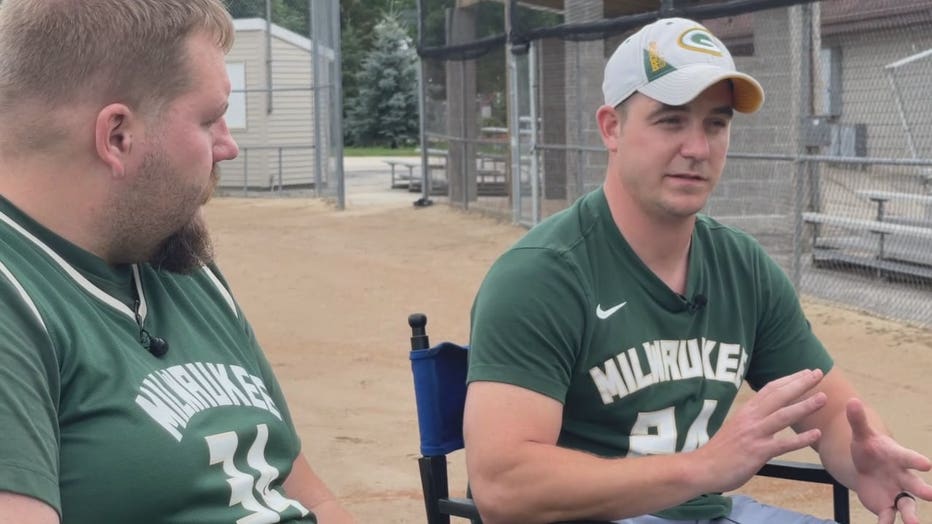 With sirens sounding, the tornado strengthened quickly as it got closer and closer to Oakfield. Travis Wells and Brett Ryan, both kids at the time, recall what happened right before the tornado hit the small town. Travis watched from his home in Mayville, just a few miles to the south… 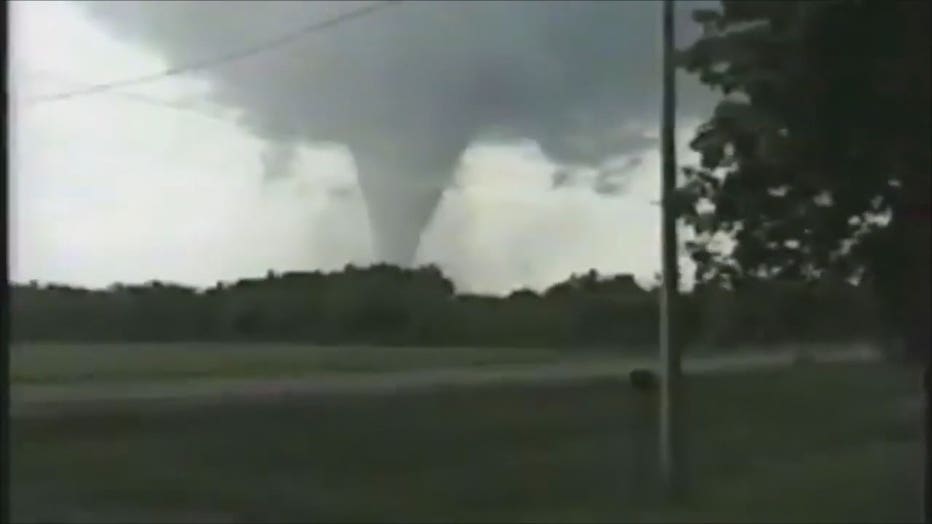 Brett was at his home in Oakfield with his sister and his dad. They were unable to hear the sirens until the window AC fell out of the window as the tornado was approaching.

"Just remember it being real muggy," said Ryan. "All of a sudden, the AC unit falls out of the window. My dad grabs me and was like, 'We got to get in the basement!’ We get that basement door open finally, and my dad couldn't shut it because of the wind pressure. He was never able to end up getting it closed. Luckily, we were safe. He got us behind the door." 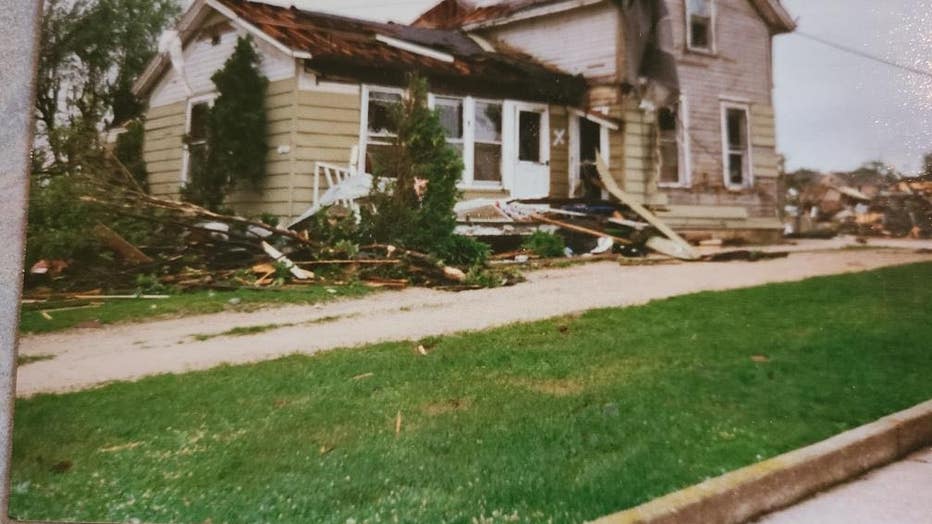 The tornado reached F4 strength as it entered Oakfield and destroyed nearly everything in its path. Upon leaving the village, the tornado reached F5 strength, the highest on the former Fujita Scale with wind speeds just under 300 miles per hour! 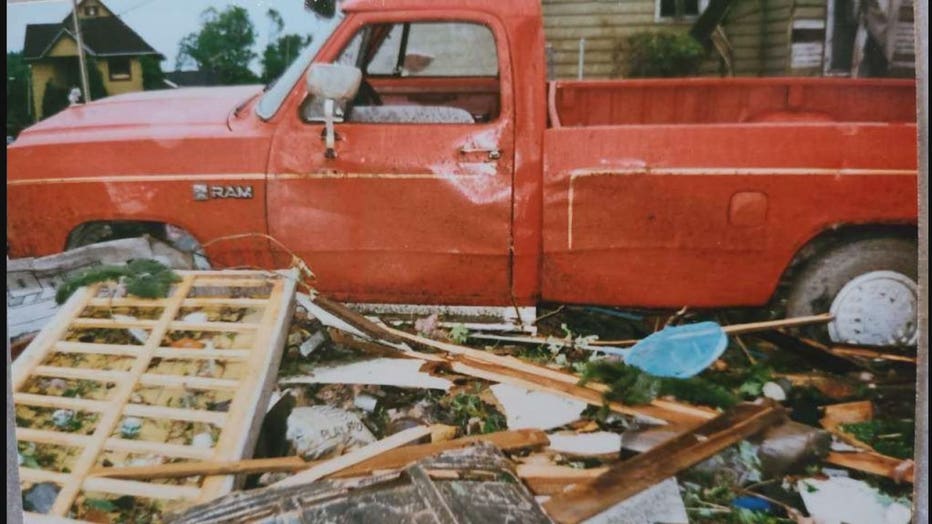 After the tornado passed, Ryan and his family emerged from their home's basement and saw the incredible destruction left behind.

"There was just shards of glass everywhere that easily me and my sister and my dad could've been hit with," said Ryan. "There were some houses completely off the lot. All these houses around, like, that house wasn't there, but like, every house had some sort of damage." 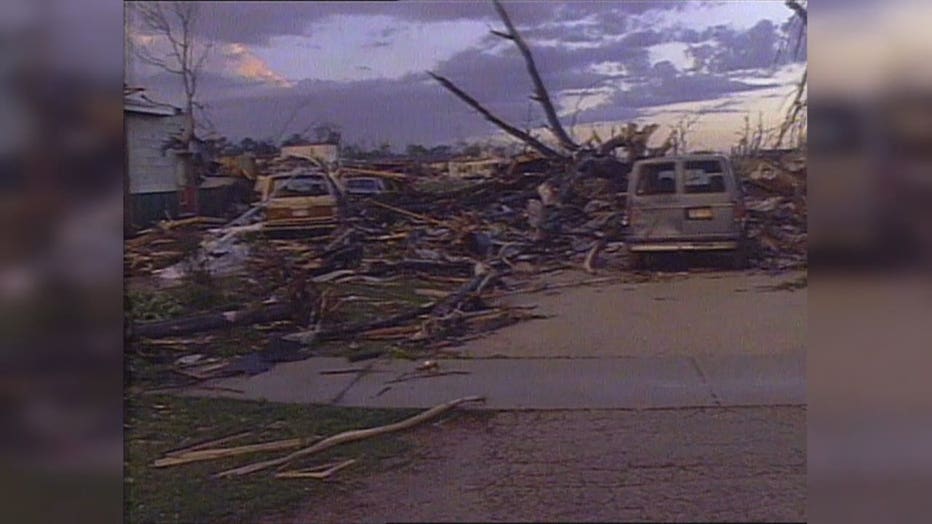 The town was hardly recognizable. Nearly everything was damaged or destroyed. Home, cars, business and even the town's century-old oak trees.

Wells later joined many from the surrounding community to assist with storm cleanup. 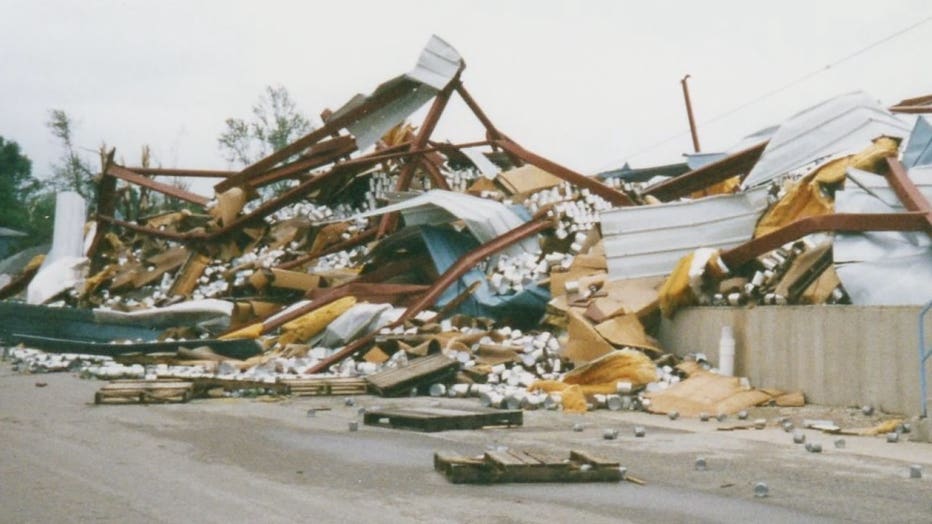 "Quite a bit of the town had debris," said Wells. "We ended up finding photos from, you know, six blocks over, and cans were all over the community because the canning factory got pretty totaled out on that."

"I forget how many miles away they were still finding cans, like, weeks later," said Ryan.

They recalled what the tornado destroyed and what it left behind.

"I think the concession stand is the only original thing," said Ryan. "Like, this all here, none of these dugouts that was here. I believe that was all new. Like, I don't remember this playground set."

"The blue one was there," said Wells. "That thing's been there for… as long as I can remember."

The pair remembered one building in particular. 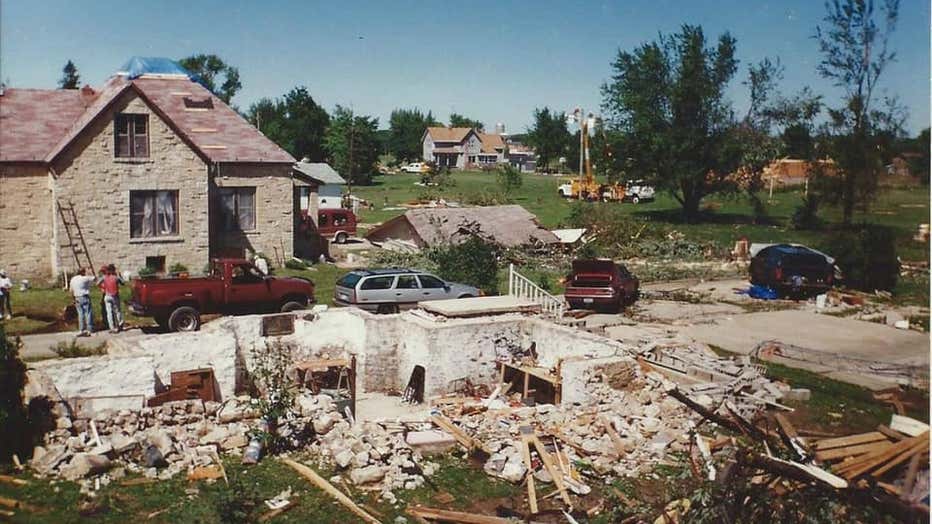 "Like, right next to the church," said Wells. "The church was completely destroyed. Houses on both sides were destroyed. The brick house is still standing there today, completely untouched. It's nuts how much it completely leveled in blocks or two apart."

Although 25 years have passed, there are still some things the two men will never forget.

"It's just like, you definitely don't take stuff for granted anymore," said Ryan.

"No, and I'll never forget that image," said Wells. "It's going to be stuck in my brain for like, ever. If I'm 85 and don't remember anything, that's one thing I'm going to remember is that F5 just popping up out of nowhere, like, literally just – poof." 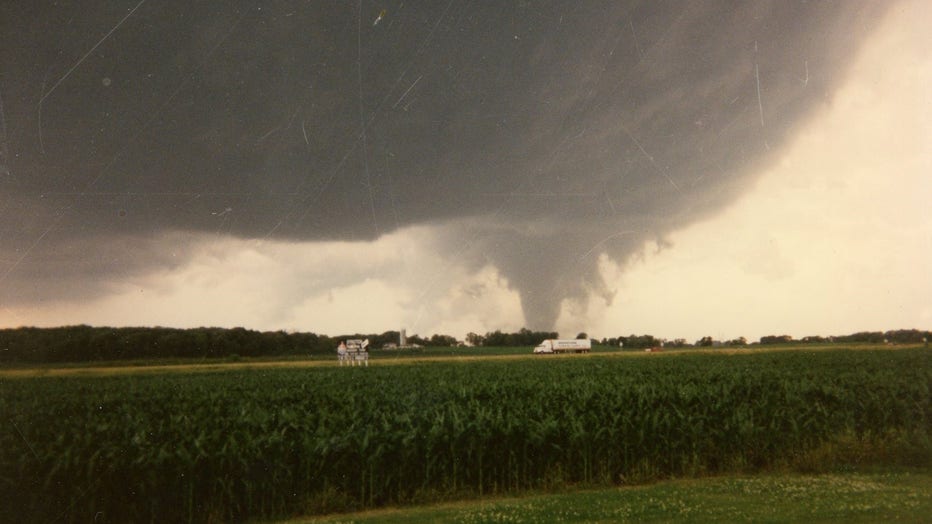 Vince Condella recalls having a new piece of technology that may have made a difference that day.

"WSR-88D, the doppler radar system that all of the National Weather Service offices would be installing, and the promise, of course, is now being able to look inside a storm and see the velocity, meteorologists would be able to see this rotation and issue tornado warnings 10, 15, 20 minutes in advance instead of maybe a minute or two warning," said Condella. "For Oakfield, that really came true. The warning was issued well in advance, and that was the thing that impressed me the most is like, this is what the promise of doppler is all about, advanced rotation, because if we can give people 10 minutes of warning instead of maybe two minutes, wow, is that all the difference in the world." 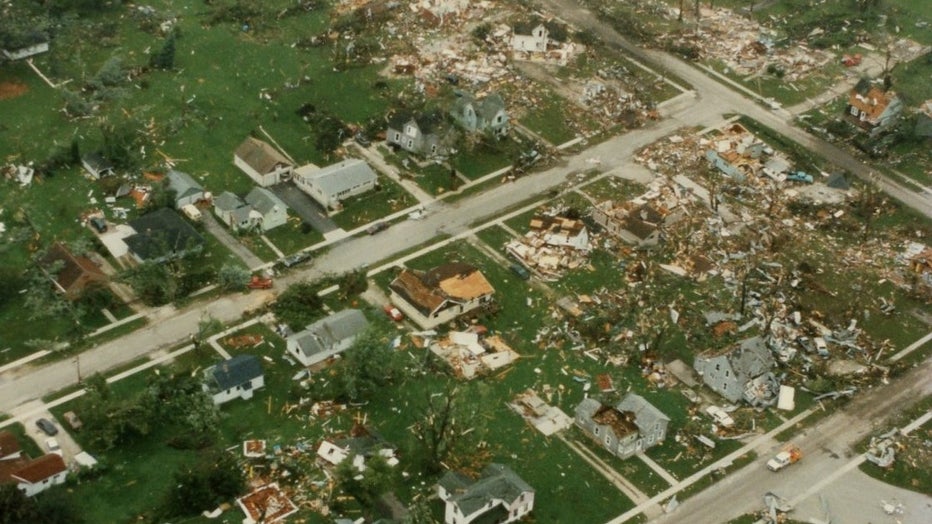 Oakfield was given 8 minutes of advanced warning thanks to the new doppler radar system. Although there's no way to quantify the effect it had that day, there were only a dozen injuries reported from the F5 tornado – a remarkable stat after encountering the most destructive winds on earth.

The Wisconsin DNR is reminding beachgoers and their pets to watch for blue-green algae and know the risks.