Another outbreak of severe thunderstorms is pounding parts of the storm-ravaged South, where widespread damaging winds over 75 mph and several tornadoes are expected Wednesday into Wednesday night.

Not only could severe thunderstorms threaten these areas, but there's also a risk of flash flooding from the South to the Midwest, in addition to snow and ice on this system's colder side in portions of the Great Lakes and central Appalachians.

Severe storms will impact some of the same places that were hit hard by last week's outbreak of severe weather, which resulted in more than 60 confirmed tornadoes over three days. While there will likely be several tornadoes – some of which could be strong – with Wednesday's outbreak, there is an even greater threat of widespread wind gusts over 75 mph, particularly from the lower Mississippi Valley into western and southern Alabama, West Tennessee and the western Florida Panhandle.

Here's what to expect through Thursday. Be sure to download the FOX Weather app for the latest forecast and weather alerts for your exact location, plus our channel's 24/7 livestream – now featuring a new, all-star lineup with live programming weekdays from 6 a.m. to 10 p.m. Eastern time. 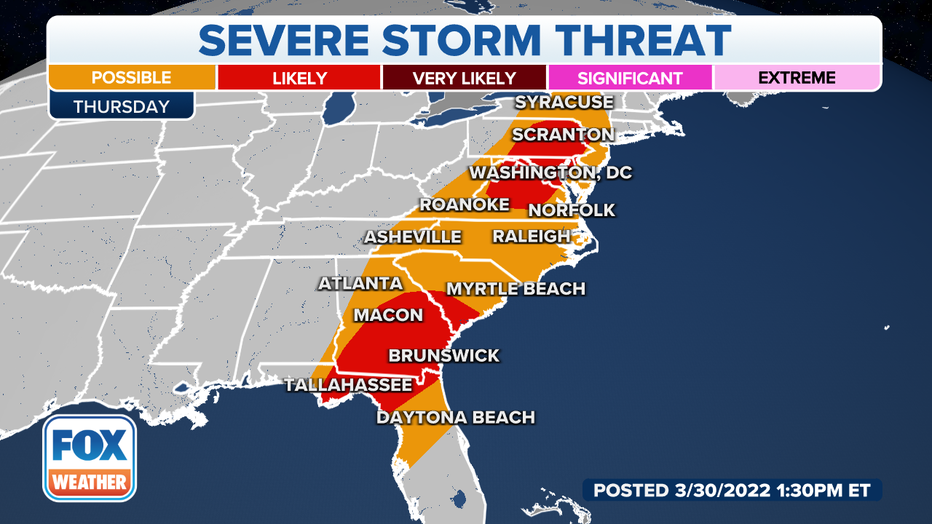 A severe thunderstorm outbreak is expected from the lower Mississippi Valley into parts of the Ohio and Tennessee valleys on Wednesday, spreading into portions of the central Gulf Coast later Wednesday into Wednesday night.

The severe weather will be triggered by a squall line of severe storms tracking eastward across those regions. A few isolated supercells might also develop ahead of the line, posing an additional severe weather threat in more localized areas.

Areas shaded in light purple on the map below have the highest risk of severe storms, particularly from parts of northern and eastern Louisiana and eastern Arkansas into Mississippi, western and southern Alabama, West Tennessee and the western Florida Panhandle. The peak threat time in these areas is now through 10 p.m. Central time.

Widespread destructive winds over 75 mph and several tornadoes are expected. Some tornadoes could be EF-2 or stronger.

Flash flooding is also a concern in portions of the South and Midwest, especially where any heavier bands of rain stall for a period of a few hours or longer.

As the storm system continues to march eastward Thursday, two more areas of severe thunderstorms are likely: from Georgia and southern South Carolina into northern Florida, as well in parts of the mid-Atlantic states.

Damaging wind gusts will be the main concern with these storms, but a few tornadoes can't be ruled out.

The system responsible for this week's severe weather threat will push off the East Coast by Friday.