This footage, posted on Twitter by Gabby Darder, shows flooding in areas of Hialeah, a city in Miami-Dade County, on November 9. A car can be seen driving through flood waters on West 26th Place. (Credit: Gabby Darder via Storyful)

FORT LAUDERDALE, Fla. (AP) - Eta remained a tropical storm Wednesday afternoon as it prepared to skirt past the heavily populated Tampa Bay region in Florida and crash ashore in the coming hours somewhere to the north along the Gulf of Mexico coast.

The storm's maximum sustained winds remained at about 70 mph (110 kph) off Florida's west coast as the storm moved northward, according to the National Hurricane Center in Miami. Additional weakening was possible as Eta approaches the coast.

Forecasters had posted — but later discontinued — a hurricane watch for a 120-mile (190-kilometer) stretch that includes Tampa and St. Petersburg. Eta had briefly attained hurricane strength Wednesday morning but then weakened. Subsequently, a tropical storm warning was issued for the same general area.

The storm has been in the Gulf of Mexico since crossing over South Florida on Sunday. At 4 p.m. Wednesday, Eta was located 85 miles (105 kilometers) south of St. Petersburg and was moving north at 12 mph (19 kph), the hurricane center reported.

The Tampa Bay region is home to more than 3.5 million people across five coastal counties. No mandatory evacuations were immediately ordered but authorities began opening shelters for anyone needing them. No serious damage or flooding was immediately reported.

Tampa Mayor Jane Castor said special care is taken at shelters to protect people from the coronavirus, such as social distancing, and suggested people bring their own masks.

“Everything will be done to make sure all of our residents are safe," Castor said.

The Florida Highway Patrol closed the Sunshine Skyway Bridge that links Pinellas and Manatee counties because of high winds. Tampa International Airport tweeted that it would suspend operations at 3 p.m. Wednesday.

In Pasco County, officials set up four do-it-yourself locations for people to fill sandbags. In Tampa, the Busch Gardens theme park announced it was closed Wednesday and several Veterans Day events in the area were canceled. 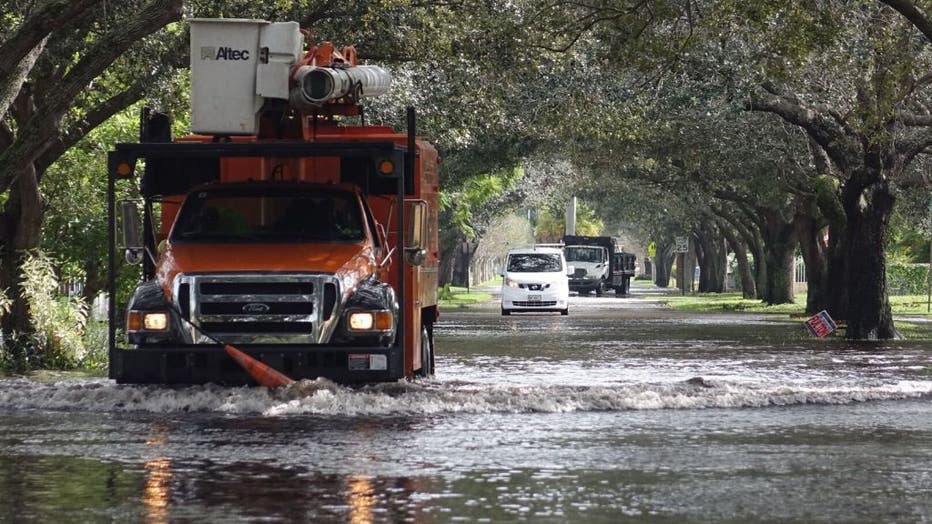 Florida Gov. Ron DeSantis issued an expanded emergency declaration to include 13 counties along or near the Gulf coast, adding them to South Florida counties. DeSantis also asked for an early emergency order from the Federal Emergency Management Agency to free resources needed to tackle the storm.

Forecasts call for more rain from the storm system over parts of already drenched South Florida.

“Never seen this, never, not this deep,” said Anthony Lyas, who has lived in his now-waterlogged Fort Lauderdale neighborhood since 1996. He described hearing water and debris slamming against his shuttered home overnight as the storm crossed Florida.

The storm first hit Nicaragua as a Category 4 hurricane and killed at least 120 people in Central America and Mexico, with scores more missing. It then moved into the Gulf of Mexico early Monday near where the Everglades meet the sea, with maximum sustained winds of 50 mph (85 kph).

There was nowhere for the water to go across much of South Florida, which had already experienced nearly 14 inches (35 centimeters) of rain in October.

Eta hit land late Sunday as it blew over Lower Matecumbe, in the middle of the chain of small islands that form the Keys, but the heavily populated areas of Miami-Dade and Broward Counties bore the brunt of the fury.

Tropical Storm Eta brought strong winds and rain to Miami, Florida, in the late evening and early morning of November 8 and 9. (Credit: David Sanhz via Storyful)

It was the 28th named storm of a busy Atlantic hurricane season, tying the 2005 record for named storms. And late Monday, it was followed by the 29th storm — Theta.

The hurricane center said Theta broke the record of 28 named storms in 2005. Theta was centered Wednesday afternoon about 670 miles (1,080 kilometers) southwest of the Azores, bearing top sustained winds of 60 mph (95 kph) as that system moved east-northeast at 10 mph (17 kph).