Eta is moving over Honduras as a weakened tropical depression. (Credit: Bomberos Honduras via Storyful)

TEGUCIGALPA, Honduras (AP) - The rain-heavy remains of Hurricane Eta flooded homes from Panama to Guatemala on Thursday as the death toll across Central America rose to at least 19. Forecasters said the once-mighty storm was expected to regather form and head toward Cuba and possibly the Gulf of Mexico by early next week.

The storm that hit Nicaragua as a Category 4 hurricane on Tuesday had become more of a vast tropical rainstorm, but it was advancing so slowly and dumping so much rain that much of Central America remained on high alert.

Two children died when their home collapsed under heavy rains in the central Guatemala department of Quiche, according to a statement by local firefighters. A third person also died in Quiche, but details were not immediately available. President Alejandro Giammattei confirmed a fourth death in a landslide in Chinautla north of the capital Wednesday night.

On Thursday, he said on local radio that 60% of the eastern city of Puerto Barrios was flooded and 48 more hours of rain were expected. Authorities reported nearly 100 homes damaged by flooding and landslides in Guatemala.

Honduras' National Police said Thursday that six more bodies had been found, bringing the country's toll to 13. The bodies of two adults and two children were found after excavations in a mudslide that occurred Wednesday in the township of Gualala, and two boys aged 8 and 11 died in another mudslide in the township of El Níspero.

Earlier, residents found the body of a girl buried in a landslide Wednesday in mountains outside the north coast city of Tela. In the same area, a large landslide buried a home with a mother and two children inside it, according to Honduras Fire Department spokesman Óscar Triminio

Triminio said there was also a 2-year-old girl killed in Santa Barbara department when she and her mother were swept away by floodwaters. The mother survived.

Heavy rain was forecast to continue across Honduras through at least Thursday as Eta moves toward the northern city of San Pedro Sula.

Much of the town of Villanueva, just south of San Pedro Sula, was under floodwaters as Thursday dawned. The Ulua river overwhelmed its banks, but there were no immediate reports of deaths.

Dozens of residents of the San Pedro Sula neighborhood of Satelite had to abandon their homes at 4 a.m. Thursday when water from the Chamelecon river arrived at their doorsteps.

Honduran officials earlier reported that a 12-year-old girl died in a mudslide and a 15-year-old boy drowned trying to cross a rain-swollen river. Two other deaths were reported in Nicaragua. 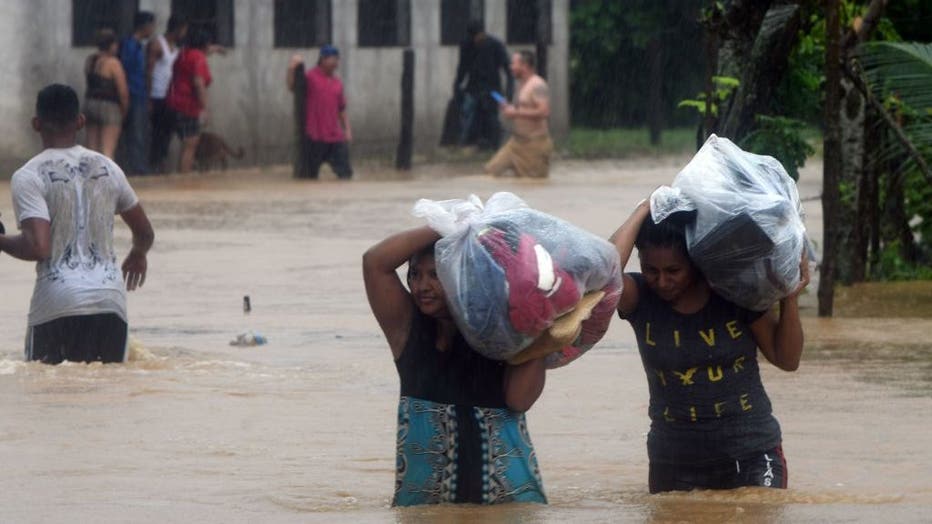 Local residents save their belongings at the Alemania suburb, which was flooded by the overflow of the La Arenera stream, due to the heavy rains caused by Hurricane Eta, now degraded to a tropical storm, in the city of El Progreso, department of Yoro

Marvin Aparicio of Honduras’ emergency management agency said Wednesday that some 457 homes had been damaged, mostly by floodwaters. There were 41 communities cut off by washed out roads and nine bridges in the country were wiped out by swollen rivers.

Among those rescued were Karen Patricia Serrano, her husband and five children. Their home was flooded with waters from the Lancetilla river and they had been in a shelter in the northern city of Tela since Monday.

“We lost everything,” the 32-year-old woman said. “I don’t know what we’re going to do. My husband is 74 years old and because of his age he can’t work. I even lost my little animals,” she said, referring to chickens, cats and dogs. 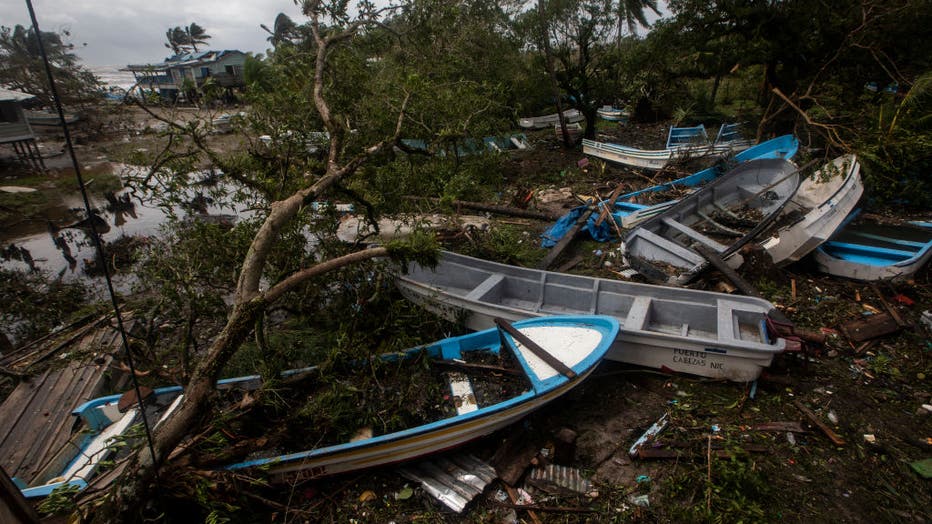 Boats are seen under fallen trees and debris of destroyed houses on the day after the devastating passage of the hurricane Eta on Nov. 04, 2020 in Barrio El Muelle, Puerto Cabezas, Nicaragua. (Photo by Stringer/Getty Images)

Óscar Armando Martínez Flores, his wife and seven children were in the same shelter. Their home near the Lancetilla river also flooded, and they made it out only with the clothes they were wearing.

“The rains began Monday and the river overflowed,” Martínez said Wednesday. “The firefighters and police arrived to take us out because the houses were flooded.”

Martínez was already in dire straits before the storm. A construction worker, he hadn’t been able to find work in eight months since the coronavirus pandemic began there. He has been selling tortillas to keep his family afloat.

At least eight people were reported missing after flooding and landslides in the Panama province of Chiriqui, which borders Costa Rica.

“The situation is worrisome, a lot of help is needed,” said Javier Pittí, mayor of Tierras Altas in Chiriqui. Landslides had closed many roads, including the main highway connecting the province to the rest of Panama.

The homes of more than 200 residents of the Ngabe Bugle autonomous Indigenous area were flooded out of their homes.

The U.S. National Hurricane Center forecast that parts of Nicaragua and Honduras could receive 15 to 25 inches (380 to 635 millimeters) of rain, with 40 inches (1,000 millimeters) possible in some isolated parts.