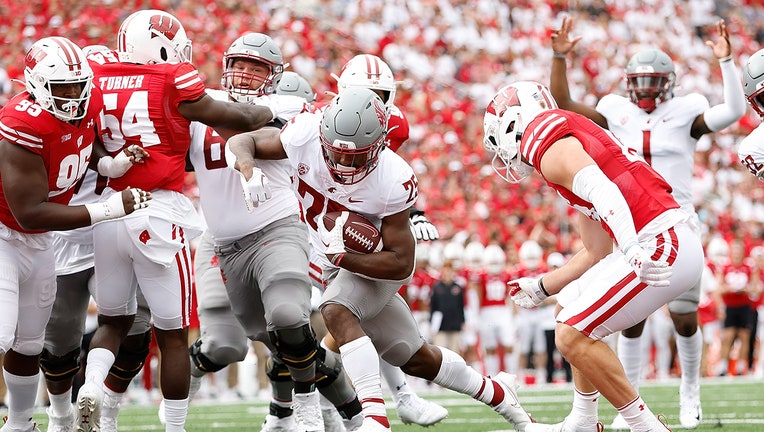 Nakia Watson of the Washington State Cougars runs for a touchdown against the Wisconsin Badgers at Camp Randall Stadium on Sept. 10. (Photo by John Fisher/Getty Images)

Watson scored on a 2-yard run in the second quarter and put the Cougars (2-0) ahead for good by turning a short completion into a 31-yard score with 5:12 left in the third quarter. Watson rushed for 522 yards and five touchdowns at Wisconsin from 2019-20 before transferring.

A game that featured three turnovers by each team and multiple bizarre plays produced a happy homecoming for Washington State coach Jake Dickert.

Dickert was born in the Milwaukee suburb of Waukesha, Wisconsin, about 65 miles east of Camp Randall Stadium. Dickert played for Wisconsin-Stevens Point from 2002-06, and about 200 friends and relatives gathered for a pregame tailgate Saturday.

This game featured two separate plays in which one team intercepted a pass and then fumbled the ball away, creating a first down for the team that threw the pick.

Wisconsin (1-1) trailed 17-14 and faced third-and-6 from the Washington State 9 midway through the fourth quarter when defensive tackle Christian Mejia picked off a Graham Mertz pass before losing the football. Wisconsin recovered at the Washington State 20, but a personal foul on Badgers tight end Clay Cundiff after the play pushed them back to the 35.

Cundiff then caught a 24-yard pass, but Quinn Roff forced a fumble that Sam Lockett III recovered at the 12 with 5:14 left.

RELATED: Check out the new and improved FOX Srts app

Washington State never gave up possession the rest of the way.

Wisconsin’s two touchdowns came in the second quarter on passes from Mertz to Cundiff. They connected on a 17-yarder and a 10-yarder, the latter coming 20 seconds before halftime.

These were Cundiff’s first touchdowns since the tight end dislocated his right ankle, broke a fibula and tore a foot ligament in a victory over Iowa last October. His first game back from that injury came in Wisconsin’s 38-0 victory over Illinois State last year.

The Cougars trailed 14-10 and had third and 10 from their 47 when Ward was hit by Kamo’I Latu just as he threw a pass that Wisconsin’s Jay Shaw picked off. Washington State receiver Lincoln Victor then applied a hit that knocked the ball loose, and center Konner Gomness recovered the fumble at the Wisconsin 49.

Instead of losing the ball on the turnover, Washington State suddenly had a first down just beyond midfield.

Six plays later, Watson caught a pass just beyond the line of scrimmage, made a spin move to get past Latu at the 30 and raced untouched the rest of the way for a 31-yard touchdown that put the Cougars ahead 17-14.

Wisconsin: The Badgers controlled the ball for over 38 minutes but committed 11 penalties and missed two field-goal attempts.

Wisconsin figures to fall out of the poll, while Washington State should at least get some votes.