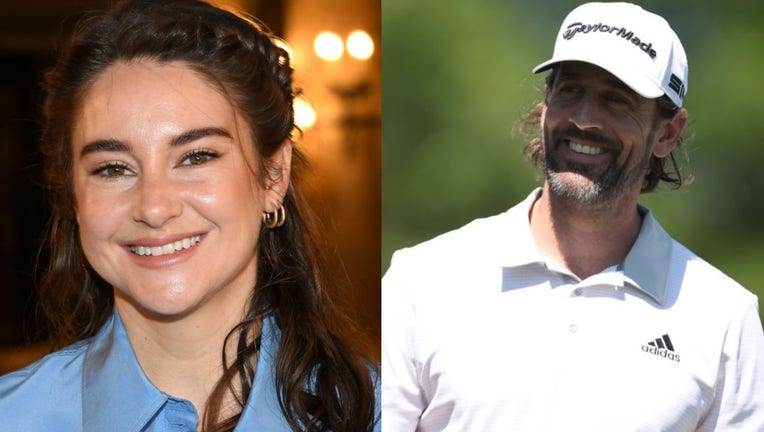 The "Big Little Lies" actress, 29, spoke to Seth Meyers Monday on his late-night show about how she's learning the rules and terminology of the game from the Green Bay Packers quarterback, 37.

"I guess I haven't felt any pressure to, but it's exciting," Woodley said of getting into the sport. "The Packers games are the only ones I find really interesting because I have people to actually root for."

Woodley also shared details about how Rodgers prepared for his temporary stint as a "Jeopardy!" host earlier this year.

"When I would get home at 8 or 9 p.m., he would still be watching ‘Jeopardy!,’" she described. "And I would open the trash can, and I would just see like a bunch of empty to-go containers and milkshake cups that he had ordered on Uber Eats, and I was like, 'You literally Uber Eat'd and watched ‘Jeopardy!’ all day long today.' He's like, 'Yeah, look at my notes.' And he had stacks of notebooks of notes that he took and highlighted and went back through. It was actually really inspiring."

The news of Woodley and Rodgers' engagement broke in February 2021 when he announced it while receiving his NFL MVP award.

The "Divergent" star told The Hollywood Reporter why they decided to keep their exciting news low-key.

"When we announced that we were engaged, we wanted to do that only because we didn’t want someone else to do it before we did. And we didn’t do it for months and months after we had become engaged, but the reaction to it was really a lot, and so we were like, ‘Let’s just politely decline [to talk about the relationship] for a little while and live in our little bubble.’"

In June, Woodley told Shape magazine she and the former Super Bowl champion started to live together right away because of the pandemic.

"Starting a relationship where you immediately move in with someone — because it’s a pandemic and you can’t just get on a plane and go back and forth on weekends — taught us a lot about each other very quickly," she explained. "We jumped in headfirst and got some of the sticky bits out of the way early."

But she believes their relationship timing was fate. "I have the perspective that I would have met Aaron in any context, any space in time because I feel we were meant to be together," she said.

But just because they lived together quickly doesn't mean they'll be walking down the aisle anytime soon. Woodley told Entertainment Tonight, "There's no wedding planning happening. There's no rush. We've got no rush."

The parade will take place through downtown Milwaukee Thursday, July 22, beginning at 11 a.m.

COVID pandemic has made child abuse harder to spot