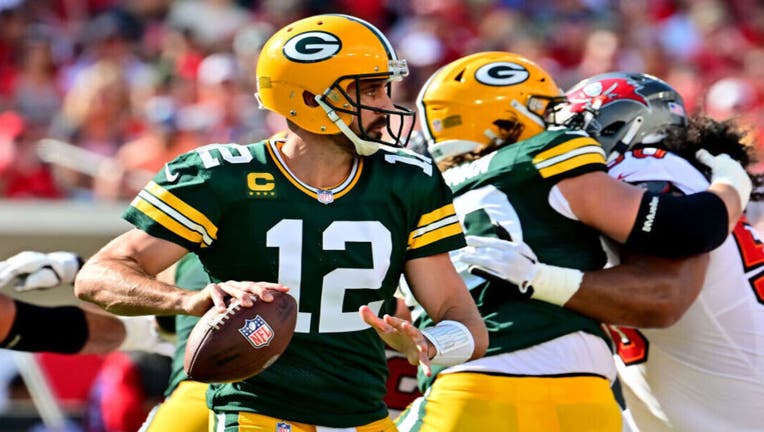 TAMPA, FLORIDA - SEPTEMBER 25: Aaron Rodgers #12 of the Green Bay Packers looks to throw a pass against the Tampa Bay Buccaneers during the first quarter in the game at Raymond James Stadium on September 25, 2022 in Tampa, Florida. (Photo by Julio Ag

TAMPA, Fla. - Aaron Rodgers threw for 255 yards and two touchdowns, and the Green Bay Packers withstood a late rally led by Tom Brady to hold off the Tampa Bay Buccaneers for a 14-12 victory on Sunday.

Rodgers tossed TD passes of 5 yards to Romeo Doubs and 6 yards to Allen Lazard on his team’s first two possessions, while the Bucs' offense sputtered much of the day without star receivers Mike Evans, Chris Godwin and Julio Jones.

For the second straight week, the Bucs (2-1) were held without a touchdown into the fourth quarter. Brady finally got them into the end zone on a 1-yard pass to Russell Gage, capping a 90-yard drive with 14 seconds remaining.

Tampa Bay’s bid to force overtime with a 2-point conversion was thwarted, first by a delay-of-game penalty and then an incomplete pass that allowed the Packers (2-1) to beat Brady for the first time in three tries since the seven-time Super Bowl champion joined the Bucs in 2020.

Rodgers completed 27 of 35 passes and was intercepted once in the first matchup in NFL history in which each starting quarterback has won at least three regular-season league MVP awards.

Rodgers has won four, including the past two, while Brady has three MVPs.

Ryan Succop kicked a pair of 45-yard field goals for the Bucs, the second trimming Green Bay’s lead to 14-6 midway through the third quarter.

Brady, who won three of four previous head-to-head matchups with Rodgers, finished 31 of 42 passing for 271 yards and one touchdown. He was sacked three times.

With Evans serving a one-game suspension for his role in an on-field brawl the previous week at New Orleans and without Godwin and Jones — two of Brady’s other primary receivers — the Bucs struggled to get the offense on track while Rodgers built a 14-3 halftime lead that could have been bigger.

Aaron Jones fumbled into the end zone after a 3-yard reception to the Bucs 2, costing the Packers a chance to add at least three points late in the second quarter. The Green Bay offense was never the same after that. 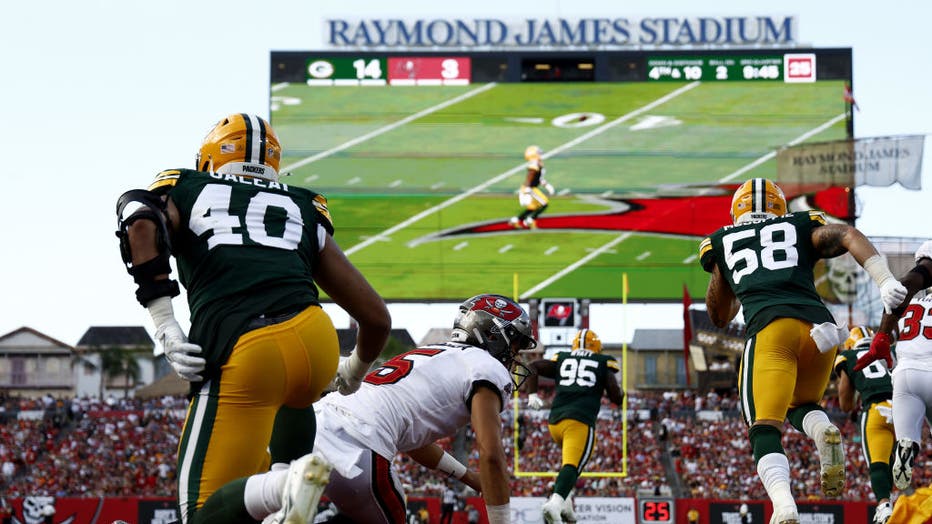 The Buccaneers got on the board in their opening drive with a 45-yard Ryan Succop field goal, bringing the score to 3-0.

Packers' rookie Romeo Doubs got Green Bay on the board during their opening drive with a touchdown. With Mason Crosby's extra point, the Packers led 7-3, which was the score at the end of the first quarter.

Up to this point in the game, the Packers were perfect on third-down conversions. Allen Lazard converted the fifth, and soon after, scored a touchdown. Mason Crosby's extra point extended the Packers' lead to 14-3 with under 9 minutes to play in the first half.

Packers' Rashan Gary sacked Tom Brady for a loss of six on third down.

This was followed by a 40-yard pickup by Randall Cobb, who was able to break free and give the Packers' offense even more momentum.

Packers' Aaron Jones then fumbled after getting hit near the goal line, and Tampa Bay recovered.

The Packers led by 11 at the half.

Green Bay punted to end their first possession of the second half.

The Packers (Keisean Nixon) forced a Tampa Bay fumble to end the Bucs' first possession of the second half. Jarran Reed recovered for Green Bay.

Aaron Rodgers was picked off by Tampa Bay's Logan Ryan with under 8 minutes left in the third.

The Packers' defense was able to hold the Bucs to a 45-yard field goal, which was good, so Tampa Bay added three points on the Rodgers interception. This brought the score to 14-6 with under 7 minutes left in the third quarter.

Green Bay led Tampa Bay 14-6 at the end of the third quarter.

Tampa Bay scored a touchdown with just seconds remaining in the game, bringing the score to 14-12. A delay of game penalty was called against the Bucs.

The Packers' defense denied the Bucs their two-point conversion, with De'Vondre Campbell knocking the ball down.

The Bucs' onside kick was unsuccessful – and the Packers won 14-12.