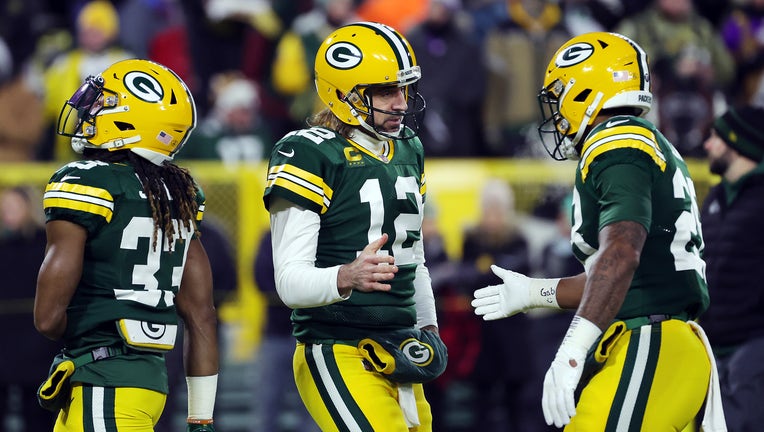 GREEN BAY, WISCONSIN - JANUARY 02: Quarterback Aaron Rodgers #12 of the Green Bay Packers warms up prior to the game against the Minnesota Vikings at Lambeau Field on January 02, 2022 in Green Bay, Wisconsin. (Photo by Stacy Revere/Getty Images)

Green Bay's victory, coupled with Philadelphia's 20-16 triumph at Washington earlier in the day, dropped the Vikings (7-9) from postseason contention and gave the Eagles a playoff berth. The Vikings were playing without quarterback Kirk Cousins after he was placed on the reserve/COVID-19 list Friday.

The Packers (13-3) are the lone NFL team with an unbeaten home record and have a chance to reach the Super Bowl without leaving Lambeau Field. Sunday night’s game exemplified the potential advantage the Packers have playing home games in January, as the temperature was 11 degrees with a wind chill of 1 just before kickoff.

Green Bay has won 13 straight regular-season home games, but lost 31-26 at home to the Tampa Bay Buccaneers in last season’s NFC championship game. The Packers haven’t reached the Super Bowl since their 2010 title and have lost in the conference championship game four of the last seven seasons.

Rodgers went 29 of 38 for 288 yards with a 20-yard touchdown pass to Allen Lazard and an 11-yarder to Davante Adams, who had 11 catches for 136 yards. Adams has 117 receptions to break the Packers' season record he set last year.

Over his last six games, Rodgers has thrown 18 touchdown passes without an interception despite playing with an injured left pinky toe. 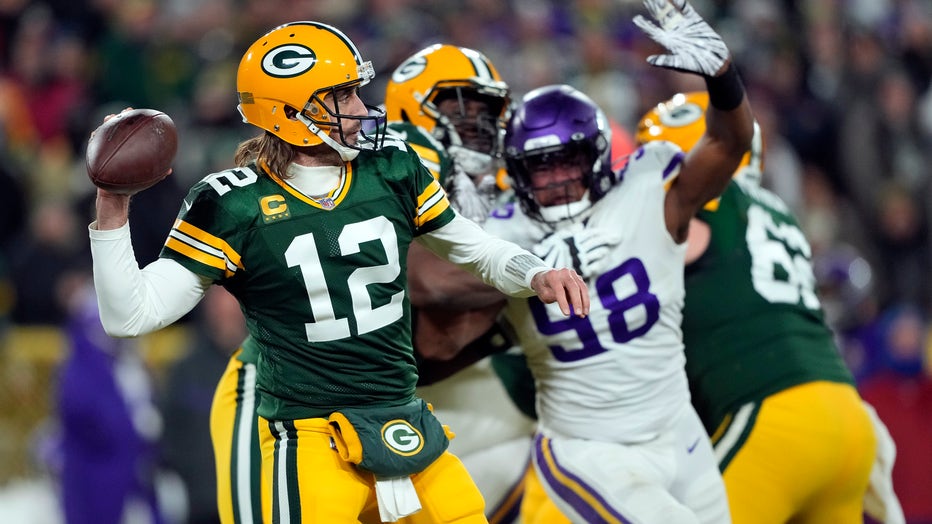 GREEN BAY, WISCONSIN - JANUARY 02: Quarterback Aaron Rodgers #12 of the Green Bay Packers passes during the 2nd quarter of the game against the Minnesota Vikings at Lambeau Field on January 02, 2022 in Green Bay, Wisconsin. (Photo by Patrick McDermot

Minnesota had won its last two matchups with the Packers but never had much of a chance in this one without Cousins, who had thrown for 341 yards and three touchdowns in a 34-31 home victory over the Packers on Nov. 21.

The Packers have won five straight since that loss in Minnesota.

Sean Mannion started in place of Cousins and went 22 of 35 for 189 yards, including a 14-yard touchdown pass to K.J. Osborn. Mannion was making his third career start, and first since the final week of the 2019 regular season.

The Packers reached the red zone on three of their first four possessions but only had a 6-0 lead to show for it, thanks to a pair of Mason Crosby field goals. But they broke through by reaching the end zone on their next three possessions, including two touchdowns in the final 4 1/2 minutes of the first half. 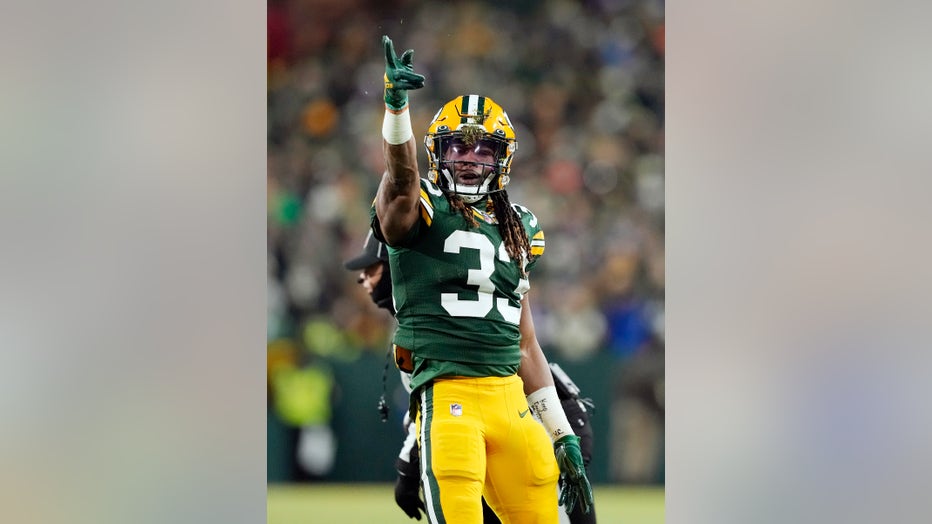 GREEN BAY, WISCONSIN - JANUARY 02: Running back Aaron Jones #33 of the Green Bay Packers signals after a first down during the 1st quarter of the game against the Minnesota Vikings at Lambeau Field on January 02, 2022 in Green Bay, Wisconsin. (Photo

A Mason Crosby field goal from 35 yards put the Packers up 3-0 after their first drive.

Another Crosby field goal, this one from 36 yards, extended the Packers' lead to 6-0 early in the second quarter.

An Allen Lazard catch for a touchdown put the Packers up 13-0 with under 5 minutes remaining in the half.

A touchdown pass from Aaron Rodgers to Davante Adams extended the Packers' lead just before halftime to 20-0.

The Vikings got on the board with a 51-yard field goal with 5 seconds left in the first half, bringing the score to 20-3.

The Packers extended their lead early in the third with a touchdown by AJ Dillon, bringing the score to 27-3.

The Vikings scored their first touchdown of the game in the third, bringing the score to 30-10.

Another AJ Dillon touchdown extended the Packers' lead to 37-10 with under 9 minutes left in the game.

Jordan Love entered the game for the Packers in the fourth.