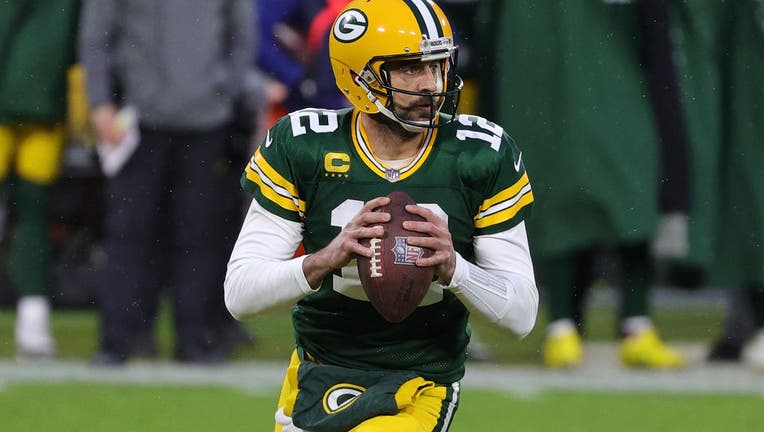 GREEN BAY, WISCONSIN - JANUARY 16: Aaron Rodgers #12 of the Green Bay Packers looks to pass against the Los Angeles Rams during the NFC Divisional Playoff game at Lambeau Field on January 16, 2021 in Green Bay, Wisconsin. The Packers defeated the Ram

The team is still insisting they will not trade the 2020 NFL MVP, according to Pro Football Talk on Thursday, despite the quarterback’s assertion there is a culture issue within the organization.

Rodgers was reported not to be at the start of voluntary team workouts Monday, and he confirmed the report Monday when he appeared in an interview on "SportsCenter." Photos also surfaced of him gallivanting around Hawaii with his fiancée, Shailene Woodley, and their friends.

Rodgers spoke at length, for the first time, about his issues with the Packers.

"I’ve been fortunate enough to play with a number of amazing, amazing people and got to work for amazing people as well. And it’s those people that build the foundation of those entities and I think sometimes we forget that."

"Look, with my situation … it’s never been about the draft pick, picking Jordan [Love]. I love Jordan. He’s a great kid. Lotta fun to work together. I love the coaching staff, love my teammates," he said. "Love the fan base in Green Bay. Incredible 16 years. It’s just kind of about a philosophy. And maybe forgetting that it is about the people that make the thing go. It’s about character. It’s about a culture. It’s about doing things the right way. A lot of this was put in motion last year. The wrench was kind of just thrown into it when I won MVP and played the way I played last year. This is kinda just the spill out of all that.

"But look, it is about the people and that’s the most important thing. Green Bay has always been about the people from Curly Lambeau being owner and founder to the ‘60s with Lombardi with Bart Starr and all those incredible names to the ‘90s teams with coach [Mike] Holmgren and Favrey and the Minister of Defense [Reggie White] to the run that we’ve been on. It’s about the people."

Rodgers didn’t go as far to publicly ask out, but reports have swirled that he has no desire to play with the Packers.

With COVID-19 cases dropping and vaccinations rising – a surge in travel is expected this weekend for Memorial Day.