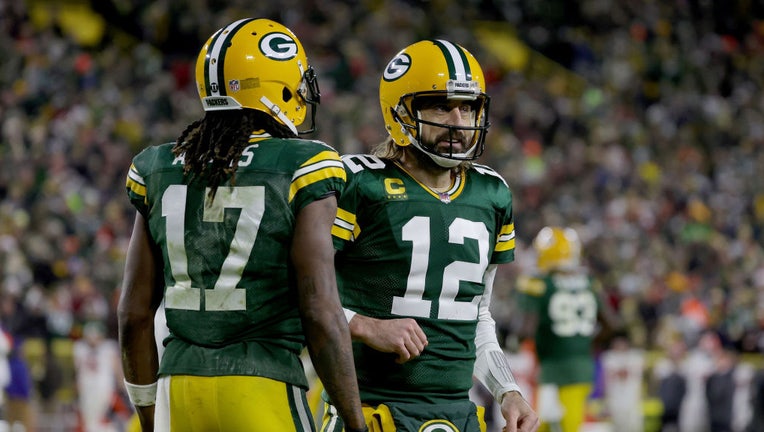 GREEN BAY, WISCONSIN - DECEMBER 25: Davante Adams #17 and Aaron Rodgers #12 of the Green Bay Packers celebrate after scoring a touchdown in the second quarter against the Cleveland Browns at Lambeau Field on December 25, 2021 in Green Bay, Wisconsin.

GREEN BAY, Wis. - The Green Bay Packers are eagerly anticipating knowing what their immediate future is going to look like before this week is out.

That’s because the Packers — who say they didn’t place a timetable for quarterback Aaron Rodgers to decide what he wants to do next in his career — are expecting that answer before this week is out, per a source familiar with the club’s thinking.

And, according to the source, the club is hopeful it won’t even take the full week to know because there’s a big decision about whether to use the franchise tag on wide receiver Davante Adams by the 4 p.m. deadline on Tuesday.

So the Packers are hopeful they’ll know what Rodgers is going to do before 4 p.m. Tuesday.

And this is why that franchise tag deadline and the Rodgers decision are somewhat tied to one another:

The Packers have zero intention of losing Adams to free agency if Rodgers decides to return to the team. Conversations between Rodgers and general manager Brian Gutekunst after the 2021 season ended discussed an outline of Green Bay’s plans, which included keeping Rodgers and Adams together if the quarterback intended to be on the Green Bay roster, per a source familiar with the situation.

But if Rodgers either decides to retire or demands to be traded elsewhere, the Packers will strongly consider allowing Adams to hit free agency if they cannot sign him to a contract because committing upwards of $20 million on him in the form of a franchise tag would affect other parts of the team, the source said.

This is an apparent contradiction to what Gutekunst said at the NFL Combine last week when he said the Rodgers and Adams situation are not tied to one another.

The Packers can rescind a franchise tag even after it’s applied, but not if the player immediately signs it.

And, sure, the Packers could still opt to trade Adams, should they tag him and then Rodgers decides to go elsewhere, but the team would still have to perform some significant salary cap gymnastics to accommodate Adams and his $20 million cap number in the interim.

So the Rodgers decision may soon become a competitive advantage for the Packers.

If Rodgers decides he wants to finish his career elsewhere, the teams commonly named as potential suitors include the Denver Broncos, Pittsburgh Steelers, Washington Commanders, and even the Tennessee Titans, according to OutKick founder Clay Travis.

Gutekunst said during the NFL Combine last week that no teams have called him offering to trade for Rodgers.

That’s kind of weird that teams interested in Rodgers would leak that interest to the media but not actually tell the Packers.

If — big if — Rodgers decides he wants to play somewhere other than Green Bay, it would likely take multiple first-round picks to pry him from the Packers because, after all, the Packers don’t have to trade him.

Through all this, Rodgers has been going about his offseason as if nothing’s pending.

He officiated the wedding of teammate and close friend David Bakhtiari on Saturday, suggesting he’s going to remain close with many of his current teammates, regardless what he decides.

This Whitefish Bay senior has a love for her sport, her teammates and a passion for saving animals. That's what makes her this week's FOX6 High School Hot Shot.