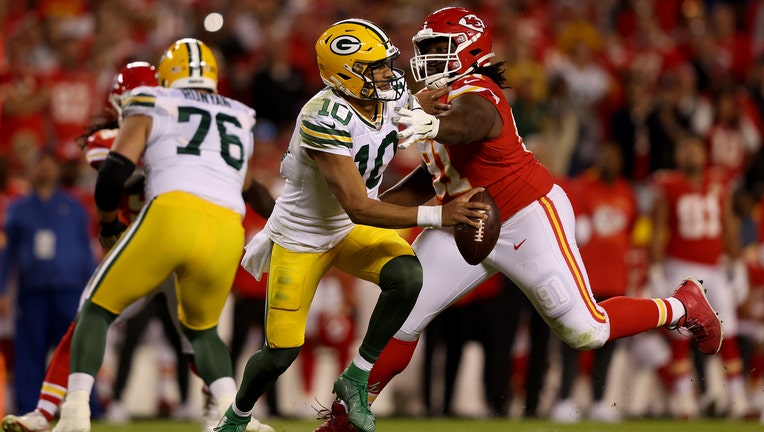 Jordan Love evades a tackle from Derrick Nnadi of the Kansas City Chiefs during the third quarter at Arrowhead Stadium on Nov. 07, 2021. (Photo by Jamie Squire/Getty Images)

KANSAS CITY, Mo. - Patrick Mahomes threw for 166 yards and a touchdown, Kansas City relentlessly blitzed the Packers' Jordan Love in his highly anticipated first start in place of Aaron Rodgers, and the Chiefs held off Green Bay 13-7 on Sunday.

Rodgers tested positive for COVID-19 earlier this week, forcing the reigning MVP to miss his first game since the 2017 season. Love responded by going 19 of 34 for 190 yards with a touchdown and an interception, both of them coming in the fourth quarter when the Packers were trying to rally from a 13-0 deficit against the defending AFC champs.

Love's touchdown pass to Allen Lazard with 4:49 left gave Green Bay a chance. But Mahomes threw a dart to Tyreek Hill on third-and-10 near midfield with less than two minutes left for a first down that allowed the Chiefs to run out the clock.

Travis Kelce had five catches for 68 yards and a touchdown for the Chiefs (5-4), who have won their three of their last four games despite a problematic offense. They finished with just 237 yards against Green Bay.

The Packers (7-2) only managed 301 yards off offense as their seven-game winning streak came to an end. Green Bay also fell to 6-12-1 without Rodgers since 2008.

More than any quarterback or offense, the difference in the first half was Green Bay's special teams.

Mason Crosby yanked a 40-yard field-goal attempt in the first quarter. He had a 37-yarder blocked in the second period. And when the Packers punted later in the half, one of their downfield blockers accidentally touched the ball with his toe and the Chiefs recovered, eventually turning it into a chip-shot field goal.

The Packers nearly did the same thing when Amari Rodgers muffed another punt early in the second half.

The officials weren't a whole lot better. They whiffed on the first-half punt – it took the Chiefs challenging the call for it to be reversed – and referee Shawn Smith had to stop the game numerous times to adjust the clock.

It probably would have ruined any offensive flow had the Chiefs and Packers not done it on their own.

Green Bay finally put together a solid drive early in the fourth quarter, when Love completed seven straight passes. But after back-to-back incompletions, Love threw a pass toward Davante Adams – who was back from his own positive COVID-19 test last week – that was picked off by L'Jarius Sneed near the Kansas City goal line.

The Packers scored on their next drive, but the Chiefs made sure it happened too late to matter.

There was plenty of support for Rodgers in the Arrowhead Stadium crowd. Not only were No. 12 jerseys plentiful, one fan held a sign that read, "We Stand With Rodgers." The embattled quarterback has been sharply criticized for claiming to be "immunized' against COVID-19 despite never getting vaccinated. Rodgers also drew the ire of many this week for a free-wheeling interview in which he claimed to be "in the crosshairs of the woke mob right now."

Packers: CB Eric Stokes left in the first quarter with a knee injury. DL Kenny Clark had to be helped off with a sore back in the second quarter, and LG Jon Runyan joined him in the locker room with an illness a few minutes later.

Chiefs: RT Lucas Niang hurt his ribs in the first half. He was already starting in place of Mike Remmers (knee), forcing third-stringer Andrew Wylie to finish the game.

Green Bay Packers quarterback Jordan Love will make his first NFL start against the Kansas City Chiefs with Aaron Rodgers out due to COVID-19.