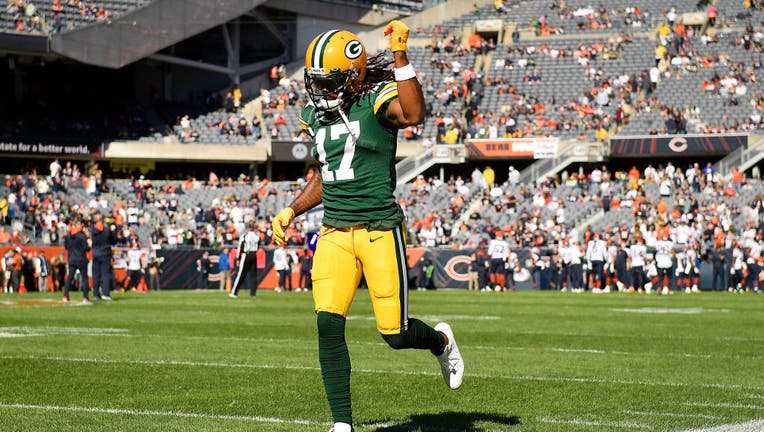 CHICAGO, ILLINOIS - OCTOBER 17: Davante Adams #17 of the Green Bay Packers reacts before a game against the Chicago Bears at Soldier Field on October 17, 2021 in Chicago, Illinois. (Photo by Quinn Harris/Getty Images)

CHICAGO - Aaron Rodgers threw for two touchdowns and ran for another, leading the Green Bay Packers to a 24-14 victory over the Chicago Bears on Sunday.

The Packers (5-1) beat the Bears (3-3) for the 20th time in 23 games counting the playoffs and improved to 22-5 with Rodgers as the starter against Chicago. They also prevented Chicago from tying them for the NFC North lead.

Rodgers shook off a sluggish start, throwing a 1-yard touchdown to Allen Lazard in the second quarter and a 12-yarder to Aaron Jones in the third, making it 17-7.

Rodgers put away the Bears after Justin Fields threw a 5-yard touchdown to Darnell Mooney, cutting the lead to three with 8:44 left. He scored from the 6 to cap a 75-yard drive, bumping the lead back up to 10. He then turned toward the crowd and yelled, "I still own you! I still own you!"

Mason Crosby made his lone field goal and all three extra points coming off a shaky outing. A week earlier against Cincinnati, he missed three field goals and an extra point before booting the winning 49-yarder in overtime.

Fields led the Bears on an 80-yard touchdown drive on their first possession, only to cool off after that. The No. 11 overall draft pick was 16 for 27 for 174 yards with a touchdown and an interception.

Khalil Herbert, a rookie, ran for a season-high 97 yards with David Montgomery (sprained knee) on injured reserve and Damien Williams on the reserve/COVID-19 list. He scored from the 1 on the game’s opening drive.

Khalil Mack, Robert Quinn and Akiem Hicks each had a sack. But after beating Detroit and Las Vegas, the Bears lost again to their rivals.

Even with holes to fill in his game, Giannis Antetokounmpo is already among the best players in the NBA. He is a two-time MVP who could probably start drafting his Hall of Fame speech without ever adding to what he does now.

A vaccine mandate order by President Biden would further complicate supply chain bottlenecks that have developed in the wake of the COVID-19 pandemic, according to J.B. Hunt Transportation Services.