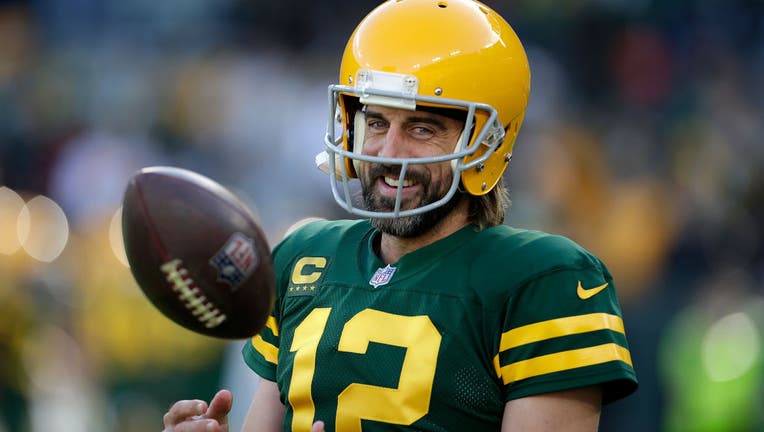 GREEN BAY, WISCONSIN - OCTOBER 24: Aaron Rodgers #12 of the Green Bay Packers warms up prior to the game against the Washington Football Team at Lambeau Field on October 24, 2021 in Green Bay, Wisconsin. Green Bay defeated Washington 24-10. (Photo by

GREEN BAY, Wis. - Seven weeks into the 2021 NFL season, Aaron Rodgers is still on top of his game.

During the up-and-down offseason, it appeared that Rodgers and the Green Bay Packers were headed for a divorce and he even thought about retiring before eventually reporting to training camp in July.

After a blowout loss against the Saints in Week 1, Rodgers and the Packers have rolled to six straight victories and are one win away from overtaking the No. 1 seed in the NFC. Green Bay will square off against the undefeated Arizona Cardinals on "Thursday Night Football."

On Tuesday, Rodgers made his weekly appearance on "The Pat McAfee Show" and told McAfee and co-host A.J. Hawk, a former teammate and close friend of Rodgers, that he has a "great coaching staff that I love" and "I’m still in Green Bay and having the time of my life."

"Obviously winning cures a lot of that," Rodgers added.

Through six games, Rodgers – the reigning MVP – has 1,710 passing yards with 15 touchdowns and only three interceptions. As the season continues, Rodgers knows not to take anything for granted.

"Life is about perspective and I’m just daily counting the blessings that I have in life and just have so much gratitude for these moments and for the fact that I’m 37, I’m still playing, still playing at a high level, and still get to have fun moments each week, including on this show," Rodgers said.

An Oak Creek teen has earned all 137 Boy Scout merit badges, an accomplishment very few have ever done.